Ariza wonders how Juan Manuel Marquez got so big all of a sudden – News! 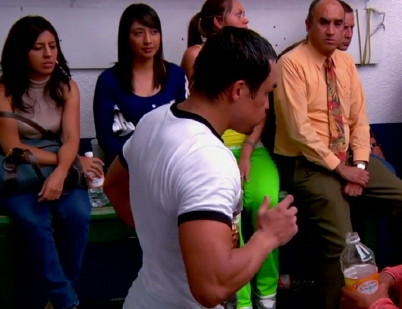 By Chris Williams: Alex Ariza, the strength and conditioning coach for WBO welterweight champion Manny Pacquiao (53-3-2, 38 KO’s), wonders how the 38-year-old Marquez has suddenly put on a great deal of muscle. If you look at how big Marquez is has gotten in the first two episodes of the Pacquiao-Marquez 24/7 series, he does appear to be a lot bigger than he was in his last fight against a badly over-matched Likar Ramos last July.

Ariza told fighthype.com “I don’t know how they’re training him and I don’t know why Marquez got so big so fast, but, okay, we’re ready for it…muscles don’t win fights.”

This is kind of odd, because a lot of boxing fans have wondered the exact same thing about Ariza’s fighter Pacquiao. They wonder how he was able to pack on a great deal of muscle in a short time without putting on fat. My thoughts on why Marquez has been able to put on weight are this: First of all, Marquez has the build to put on muscle quickly. He’s a mesomorph, a type of body that is naturally muscular. Marquez was blessed with the kind of frame where he can pack on a lot of muscle if he wants to. Had he chosen a different sport, such as wrestling, Marquez would likely look like a body builder and it wouldn’t be hard at all for him to build that kind of body due to his excellent genes. He was made to carry a lot of muscles and has probably been holding himself back by staying so long at featherweight, super featherweight and lightweight.

Right now, Marquez looks bigger and more muscular than Pacquiao by far and I think that has Ariza, Freddie Roach and Pacquiao worried. All you have to do is take one look at how hard Marquez is punching right now to see that he’s much stronger with the added muscle he’s put on and it doesn’t look good for Pacquiao, who has been accustomed to being the stronger fighter. On November 12th, Marquez will be the stronger and bigger fighter and there’s much Ariza can do about it at this stage. It’s too late for him to come up with any kind of protein drinks that will make Pacquiao as big and as strong as Marquez. It’s not going to happen. It’s too late for Pacquiao, and I see him suffering another beating, but this one much worse than in his two previous fights against Marquez.

« Alvarez, Rios and Broner: Three of the best fighters in boxing today

Freddie Roach vs. Ignacio Beristain: Who do you pick? »