Hellenius being groomed for the Klitschko’s 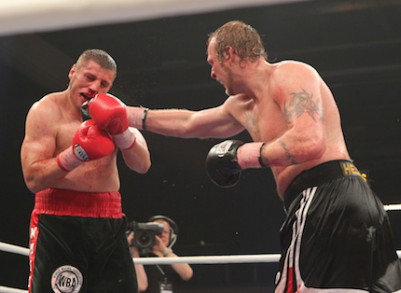 By John F. McKenna (McJack): The name of Robert Hellenius (16-0,11 KO’s) is being mentioned with increasing frequency in recent weeks as he fights his up the fistic ladder towards a heavyweight title shot. Hellenius, who goes by the nickname “The Nordic Nightmare” at 6’7” and weighing 240 pounds, is one of the few fighters in the world who has the size to pose a possible threat to the Klitscho’s.

Hellenius who is from Finland turned pro in 2008 and now fights out of Germany. He began to be recognized internationally when he TKO’d former WBO heavyweight champion Lamont Brewster in the 8th round on January 30, 2010. He also KO’d former WBC champion Sam Peter in the 9th round last April. Most recently Hellenius scored a 9th round TKO over ex heavyweight champion Sergei Liakhovich in Munich, Germany in August.

The WBO updated its rankings over the weekend to reflect that “The Nordic Nightmare” is now the #1 contender for Vladimir Klitschko’s multiple title belts. Hellenius has achieved the #1 ranking relatively quickly, given that he has only had sixteen professional bouts. Hellenius is known to be a power puncher. Eleven of Robert’s sixteen fights have gone the KO route.

During HBO’s coverage of WBC heavyweight champion Vitali Klitschko’s match against Tomasz Adamek the commentators made a point of mentioning Hellenius. At that point Tomasz was receiving a drubbing from the elder Klitschko and it was being decried that there was really no competition in the heavyweight division. Hellenius’s name was brought up as a ray of hope. The Klitschko’s are both dominant champions in their own right and have virtually cleaned out the division. It is reminiscent of what Joe Louis did in 1941 when he defended his title seven times in one year. At that time, just as today Louis was criticized for fighting “bums”. In fact 1941 was called Louis’ “Bum of the month” campaign. Of course boxing historians now classify Louis as possibly the greatest of heavyweight champions.

Heavyweight champions no longer fight seven times in one year, but then again there are two dominant champions named Klitschko who are doing their best to replicate what Louis did in 1941.

Hellenius is nowhere near being the motor mouth that David Haye is and defers to his manager Ulli Wegner when asked questions about possible future opponents. A likely opponent for Hellenius in the near future is German-Ukrainian Alexander Dimentrenko. Dimentrenko, like “The Nordic Nightmare” is also 6’7”.

Robert’s brain trust is moving ahead cautiously in guiding him towards a title shot. They will make every effort to avoid any costly missteps in the process.

« Dawson vs. Hopkins: Youth and talent will beat experience and old age