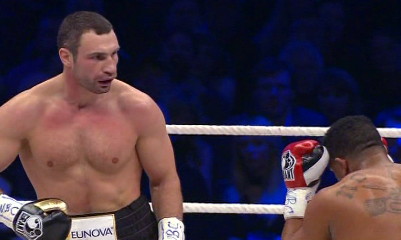 By Dan Ambrose: A very modest WBC heavyweight champion Vitali Klitschko (42-2, 39 KO’s) is predicting a knockout against challenger Tomasz Adamek (44-1, 28 KO’s) on September 10th, and doesn’t see the fight as being any kind of problem to win.

Indeed, Vitali is so confident of victory that he’s opened up his training camp completely for all the world to see. Vitali says he doesn’t care if the training is filmed because he doesn’t see Adamek being able to take advantage of anything he might spot during the training. Vitali is completely right unfortunately. Adamek is just too small, too weak and too slow to have any chance of capitalizing on any mistakes Vitali might make in the fight.

I wouldn’t go so far as to say that. Adamek barely beat an injured Chris Arreola in 2010, so what does that tell you about Adamek? He’s certainly not in the same league as Wladimir Klitschko. I think Adamek would have his hands full against a healthy Arreola and Odlanier Solis. I can see both of those guys beating Adamek if given the chance.

However, it really doesn’t matter now because Adamek is already set for his title fight against Vitali. But it’s probably not going to be a very competitive fight because Vitali is just too big and too good for Adamek. Boxing fans would likely feel better about Adamek’s chances in this fight if he had taken on a better level of opposition going into this fight instead of the mostly old guys that Adamek has feasted on to get to this point.

« Will Dawson make Hopkins look like an old man on October 15th?

Helenius vs. Liakhovich mismatch this Saturday: Look for easy win for Robert »