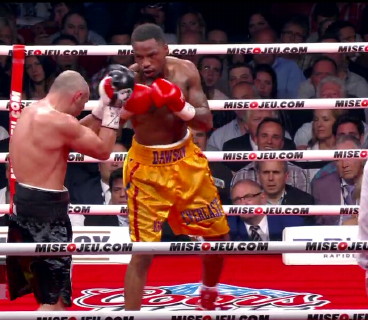 By Jason Kim: Light heavyweight Chad Dawson (30-1, 17 KO’s) looked outstanding on Saturday night in beating the tough but limited Adrian Diaconu (27-3, 15 KO’s) by a 12 round unanimous decision at the Bell Centre in Montreal, Canada. Although it’s been reported that both fighters were hurt in the bout, that’s not true. The only pain they felt was the sting of the punches.

Neither fighter was staggered. Diaconu was knocked off balance on more than one occasion from Dawson’s head shots, but he was never hurt. The judges scored the fight 118-110, 117-110 and 117-111. Dawson took heat after the fight for looking disinterested and too calm. However, there really wasn’t any need for Dawson to get excited because Diaconu was too slow and too short to land his punches.

Diaconu missed shots all night long and was only able to land on rare occasions. Most of the fight Dawson dominated him with jabs, hooks and uppercuts to the head. If there’s any area where you can criticize Dawson’s performance it would be his jab. He didn’t snap his jab with conviction and spent the entire fight pawing with his jab. This an area that Dawson’s trainer Emainuel Steward needs to work on, because if Dawson had a great jab to go along with his other amazing skills, he would dominate.

This is the 32-year-old Diaconu’s third loss in his last three fights and it tells you that he needs to downsize his ambitions a little. He was dominated twice by Jean Pascal and now Dawson. Diaconu might be better off losing some weight and moving down to the super middleweight division.

Dawson spent much of the fight coming forward and pressuring Diaconu. This was the strategy that Dawson’s trainer Steward designed to beat Diaconu and it worked to perfection. Diaconu couldn’t fight well going backwards and was caught again and again by Dawson’s uppercuts. Diaconu was able to land some shots in the 9th round when Dawson got a little lazy. However, after throwing a slurry of shots that mostly missed, Diaconu found himself once again taking steady punishment as the round ended.

I personally thought Dawson looked better than Bernard Hopkins, who also fought on the card, beating Jean Pascal by a 12 round decision. I think Dawson would beat Hopkins if given the chance.