Ward in stay busy fight against Bika on November 27th 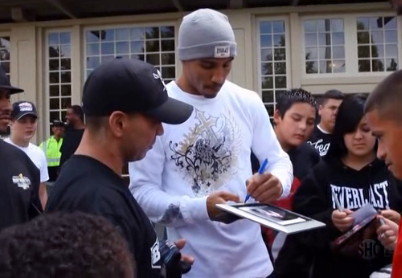 By Scott Gilfoid: Arguably the world’s greatest super middleweight Andre Ward (22-0, 13 KO’s) has a stay busy fight against 31-year-old Sakio Bika (28-4-2, 19 KO’s) in less than two weeks at the Oracle Arena, in Oakland, California. This is replacement opponent for the highly skilled Andre Dirrell who was supposed to be fighting Ward in the stage 3 part of the Super Six tournament. However, after Dirrell was injured in his last bout of the tournament, he was forced to pull out of the fight and the entire tournament so that he could heal up. Ward will now be fighting Bika in a non-Super Six tourney fight and will use the fight as a kind of mini tune-up for the big fights that Ward has ahead of him against the likes of Arthur Abraham, Carl Froch or Glen Johnson.

Bika is a decent fighter, but he’s nowhere the same skill level as Ward. When Bika has stepped it up against fighters like Joe Calzaghe and Lucian Bute, he’s lost soundly. Given that Ward appears to be a level or two above Bute and Calzaghe in my estimation, I see this fight as yet another shut out win for Ward. Bika really has nothing to offer in terms of ability that would suggest that he can be competitive with the talented Ward. Bika is more of a fighter that fights with anger and tends to turn fights into foul-plagued affairs. It won’t work against Ward, because he won’t waste time letting Bika crowd him like Calzaghe and many other opponents of Bika have.

Ward will no doubt his jab and his powerful right hands to dominate Bika and score points. Don’t look for this fight to be a knockout win for Ward, because he’s just going to box Bika and look to win on points the easy way in front of what will likely be 10,000 screaming Ward fans on November 27th. This fight should be a good warm up for Ward’s fights against the other Super Six tournament fighters.