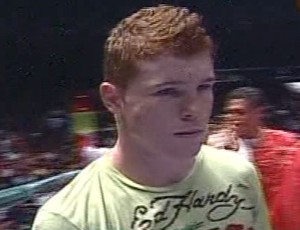 By Chris Williams: Welterweight contender Matthew Hatton (38-4-2, 15 KO’s) could be the sacrificial lamb for unbeaten welterweight contender/prospect Saul Alvarez (30-0-1, 22 KO’s) to try and look good against on the Floyd Mayweather Jr. vs. Shane Mosley undercard on May 1st at the MGM Grand, in Las Vegas, Nevada. Having seen Alvarez’s last six bouts, I can say this: he looks like a terribly flawed fighter with zero defense and slow hand speed. Alvarez has a good right hand, but that’s about all he has. His left hook is poor, and he loads up with everything he throws.

I’ve never seen a fighter miss with so many punches as Alvarez did in his last fight, a 12 round decision over light welterweight Lanardo Tyner in December. I can see the 28-year-old Hatton beating this guy, and I’m really surprised that his promotional team is considering putting him in with a guy like Hatton.

Hatton is not a world beater, because he is very limited with not much power or speed going for him. However, he looks a lot better than what I’ve seen of Alvarez. The Mexican fighter just looks god awful slow with his punches and his defense is totally missing. I don’t care if Alvarez is 19; his hand speed is as poor as some of the older fighters I’ve seen.

At that age, Alvarez should be fast and not painfully slow and his defense, it’s just awful. I think Hatton can beat this guy and I have no idea why the sanctioning bodies have Alvarez ranked at #4 WBC, #5 WBO, and #7 WBA. To me, Alvarez looks like a good 2nd tier fighter, someone in the middle of the pack.

I’m not too keen on Hatton either, but I think he’s a lot better than this guy. I doubt that Alvarez’s promoters will risk putting him in with a guy like Hatton. Too much risk for a fighter that is too deeply flawed in my view.

« Arreola: “Doesn’t matter if I have to go through David Gaye, I want that title”

Would Pacquiao get dominated by Mayweather? »