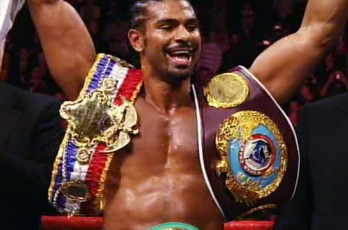 By Michael Taylor: August: At the beginning of August Devon Alexander was introduced to the big time with a victory over Junior Witter, retiring Witter for the vacant WBC Light Welterweight title. On the same show, Timothy Bradley and Nate Campbell’s WBO Light Welterweight clash ended in a no-contest, as a head butt caused a nasty cut over Nate’s left eye, and the fight was stopped. It was originally called a TKO victory for Bradley but was later overruled to a no-contest. Then near the end of the month Juan Diaz defeated Paulie Malignaggi in his home town of Houston.

One of the judges was rumoured to have been close to Diaz’s family and Malignaggi looked ripped off, and was very annoyed after the fight, but annoyed couldn’t describe it. Then at the end of August Tavoris Cloud defeated Clinton Woods in a brutal fight for the vacant WBC Light Heavyweight title. Cloud like Alexander was introduced to the big time, and both have bright futures.

September: Nothing much happened in September until Irish Olympian Darren Sutherland was found dead by his promoter Frank Maloney. Sutherland was found hung and was put down as suicide. The young talent was suffering from depression, but none of this went to press so it was a huge shock to hear. Then on September we had the return of the Pretty Boy, Floyd Mayweather Jr against Lightweight Juan Manuel Marquez. They fought at 145lbs but Mayweather disobeyed the agreements and came in at 146lbs and was given a penalty by a very emotional Richard Schaefer. Mayweather dominated the fight from start to finish, hardly moving off first gear, flooring Marquez in the second. A week later Vitali Klitschko took apart American hopeful Chris Arreola landing countless amount of shots to stop the weeping challenger in the 10th.

October: Juan Manuel Lopez was finally exposed against challenger Rogers Mtagwa, in a fight which shouldn’t have been a problem for WBO Super Bantamweight champion. Lopez struggled at the end but was too far ahead and won on points. Then came the beginning of the Super Six tourney. Carl Froch defeated Andre Dirrell on split decision to defend his WBC title in a sloppy fight. While in Germany Arthur Abraham sparked out Jermain Taylor with 6 seconds remaining in a fight which Taylor run out of steam once again, and was sent unconscious by the final knockout.

November: At the beginning of November the biggest boxing event I’ve seen in Britain happened between David Haye and Nikolay Valuev. The WBA champ slowly plodded after Haye all fight, and was outpointed on majority decision where neither fighter really convincingly won rounds. It was a huge win for Haye, and all of Britain. The week after Manny Pacquiao was back against Miguel Cotto, both fighters looked in great shape, but it was Manny who was just too good, flooring Cotto in rounds 5 and 6. Then Manny went on to steam roll a badly cut Miguel Cotto before stopping him in the final round. The week after Andre Ward upset WBA Super Middleweight champion in the final fight of the first round of the Super Six tourney. Ward used his head more than his fists and the referee called the fight off in the 11th and Ward took the technical decision.

December: Then at the beginning of December the proposed Hopkins-Jones rematch was ruined in one round as IBO Cruiserweight champion Danny Green destroyed Roy. But later there has been speculation from Jones that Green was using illegal substances in his gloves. Amir Khan defended his title with a 72 second victory over unknown Dmitriy Salita, flooring him 3 times the first in the first 10 seconds. Then the year ended with Vitali Klitschko beating Kevin Johnson on points in a lopsided fight, but Johnson is only the second fighter to go the distance with Klitschko. Then Kelly Pavlik returned to the ring after a hand infection and pulling out of a fight with Paul Williams, winning easily against unknown Miguel Espino. The years ends not so greatly as we wait to see whether or not the great fight between Pacquiao and Mayweather will happen, and now the speculation that Manny could be using steroids ends a great year, and a great year of controversy.

Miranda cancels fight with Stieglitz; Jacobs picked for prospect of the year – News »