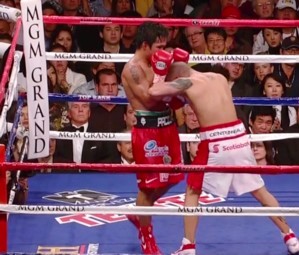 By Fred-Lloyd Brunzki: Manny Pacquiao vs. Floyd Mayweather Jr. is finally on with some minor details to be ironed out like the weight class, size of gloves, and fight venue. It looks like the purse issue has already been settled and there seems to be no problem with the ‘minor details’ because according to Pacquiao’s promoter, Bob Arum, “Money talks!” Who needs who in this fight? Judging from the present situation, it appears that Mayweather needs this fight more than Pacquiao does. The Pacman is the undisputed P4P king, World Boxing Organization welterweight champion and the only boxer to capture 7 world titles in 7 weight divisions!

Pacquiao’s bout with Cotto raked in more PPV buys than the latest fight of Mayweather against JM Marquez even if they were both “number one”. The Pretty Boy, on the other hand, is the unbeaten 5-weight division titlist, former P4P King before his retirement and has an unblemished 40-0 win-loss record.

His defensive boxing skills are incomparable and is regarded the best but he has no boxing title right now. Comparing their last fights, (Pacquiao vs Cotto and Mayweather vs Marquez) Mayweather showed he still possesses his craft while Pacquiao attained legendary status as the only man capturing 7 titles in 7 weight divisions, so who should call the shots? It is justifiable that Pacquiao’s terms should prevail

As I have earlier mentioned, Mayweather is just an option for Manny Pacquiao although by going against separate opponents, they would not get the same outcome in terms of demand and paycheck. The fact that it is a compelling match-up that can’t be ignored, it will surely happen especially now that they have agreed to the initial terms. Without the Mayweather fight, a lot of issues will continue to be debated or agreed, but Pacquiao’s ambition to seek an 8th world title is sensible, unlike Hatton-Mayweather for obvious reasons.

Mayweather has 3 interests: a large paycheck, regaining his place as P4P King by keeping his unblemished record, and to establish himself as greater than Pacquiao who is already regarded as one if not the best in the sport. It’s hypocrisy if the millions Pacquiao will earn in this fight is not Pacquiao’s motivation. Well, it seems because all Pacquiao can gain in this fight is more respect by beating the unbeatable Mayweather. Pacquiao is a real fighter who wants to prove his boxing greatness whatever it takes. This machismo and adventurism has brought him to superstardom so it will not surprise us if he accedes to Mayweather’s demand of 154 pounds fight-weight and using 10 oz. gloves.

But since they both wanted the fight, I would think that they would settle for 8 oz. gloves at 147. It is true that he plans to snatch a title at 154 lbs. against Junior Middleweight champion Yuri Foreman but Foreman is a different fighter and it is an adventure that in case of a failure, it will not diminish his greatness. Mayweather is different; he is the best out there and given that demand, he shall take away Pacquiao’s speed. Pacquiao can do 154 vs other fighters but not with Mayweather who would be naturally at ease with the weight. If fought at Mayweather’s demands, his victory would cast shadows of doubt.

Mayweather is being accused to be a ‘ducker’ when he retired without facing exciting challengers in the welterweight division starring Miguel Cotto and Shane Mosley. Much more, he has fought smaller fighters than him, but surely he is no ducker. He fought Oscar De La Hoya at 154 in spite of the Golden Boy’s advantage in height. It is plain and simple that what motivates him more is the fat paycheck. Afraid or not, he has to fight Manny Pacquiao for that same reason. He might think Pacquiao will not agree to a March 13 bout because of his candidacy for a Congressional seat in his native country but surprisingly, Pacquiao says “Yes.” Was it for the fans, for the sake of boxing, for his insatiable quest for guts and glory, or he is simply become Money Pacquiao?

Whatever it is, it’s all what we want.

Anchondo wins by split decision over Mauricio Herrera in eight »