Nathan Cleverly – True prospect or subject to over hype? 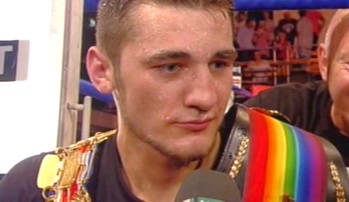 By Adam Fillingham: Nathan Cleverly, the current British and Commonwealth light heavyweight champion has been touted recently as the new Joe Calzaghe. The man from Cefn Fforest has defended his commonwealth belt 5 times and his British belt once, since his classy defeat of Tony Oakey a year ago. So is the comparison to the Welsh legend justified? Or is he just another over hyped young gun? Only time will tell.

His recent displays against the undefeated English champion Danny McIntosh and the game Courtney Fry have only fuelled his fans. His fight against the always entertaining Danny McIntosh was a contender for fight of the year. In that fight he looked incredible and after finding his range in the second round he out classed the plucky man from Norwich. Cleverly knocked him down with a big left to the body and added a right hook to send McIntosh to the canvas. McIntosh was down again moments later from a right hand to the jaw. The same happened again in the third but the end finally came in the seventh with McIntosh down and then beating the count but referee Howard Foster called an end to the bout to stop McIntosh taking more punishment.

In the fight with Courtney Fry he showed just why Cleverly is one of Britain’s biggest prospects. This fight was by far his hardest and had to churn out the win and over come fatigue and the rough and tough nature of Fry to come through with a win. He out classed Fry winning every round (the first could be argued as a draw), throwing a large variety of shots to head and body. Cleverly was relentless and did not give Fry a second to breathe in the fight and kept Fry pinned to the ropes as much as possible. When he hurt Fry in the eighth he went in for the kill, which since switching trainers (leaving Enzo Calzaghe to be trained by his own father) he has learnt to do with perfection and piled up the pressure on a shaky legged Fry.

Looking at his last few defining fights there are many arguments for Cleverly looking to say that he could well be world champion or even as good as the legend, of Joe Calzaghe. (Whether you are a fan of Calzaghe or not) His body attacks are second to none and he used them to perfection to wear down the older man in Courtney Fry. His varieties of shots are brilliant, can switch from head to body in an instant! His footwork for a big man is also fantastic and easily ran circles around both the older men in his last two fights. His strong jab teamed up with his long reach is a fantastic tool, which Cleverly uses well to begin his attacks.

There are weaknesses though in every man and if he wants to be as big as his fellow Welshman he must rectify these. His stamina against both opponents was an issue. Thankfully the opponents he faced were no legends so they could not capitalize on this. He has to work on his stamina before he faces someone that can fight hard to the 12th round.

I noticed that Cleverly can have a tendency to push his opponents if they try to get in close and rough him up. Cleverly may get away with this with British referees but if he steps up to a world level and has international referees they may be less lenient.

Cleverly has a fantastic jab but he needs to use it more often to his advantage. It is strong, powerful and used with his long reach, can keep him out of trouble in sticky situations. For some reason though he would prefer to get up close and inside which is all okay when fighting the likes of Courtney Fry but if he comes up against a Bernard Hopkins, an inside master, he could be in a world of trouble. If he was to fight someone with an inside ability better than his previous opponents he will have to use his jab and outside strength.

This now brings me to my final point. To be the Commonwealth Champion is a respectable achievement but to be recognized as a true world class fighter you have to beat experienced, battle hardened, proven American or Eastern European fighters, not international journeymen fighters who would fold after a little punishment, or unproven Brits. Tony Oakey and Danny McIntosh were good wins (especially in the fashion he defeated them in) but we will only truly know if he is going to the next level once he has had a proper war.

So is he over hyped? Only time will tell. Will he make it to the next level? We will find out in the coming months, when he fights in mainland Europe for the first time (in Italy) for the vacant European belt.