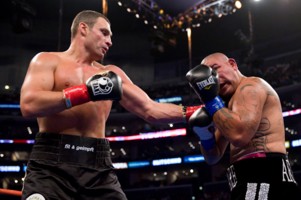 Photo: Pavel Terekhov – By Eric Thomas: According to the latest news, World Boxing Council heavyweight champion Vitali Klitschko (38-2, 37 KO’s) plans on retiring in two to three fights. This may come as a shock to some boxing fans that have been following Vitali’s off and on career for the past 10 years. However, for other boxing fans Vitali retiring will be a celebrated event because they see him a boring champion, someone who doesn’t mix it up with his opponents as much as they’d like.

Klitschko, now 38, recently defeated previously unbeaten Chris Arreola (27-1, 24 KO’s) by a 10th round stoppage last Saturday night at the Staples Center, in Los Angeles, California. The fight was entirely one-sided with the tall Klitschko generally having his way with the heavyset Arreola, hitting him with everything but the kitchen sink through 10 rounds.

Arreola, to his credit refused to quit despite being unable to land much of anything in the fight, was finally forced out by his trainer who threw in the towel after the 10th. So one-sided was the fight that an argument could be made that it should have been stopped much earlier than the 10th.

After the fight, Klitschko mentioned wanting to retire soon when interviewed by Larry Merchant, saying “I don’t want to be 45-year-old George Foreman’s record.” Vitali missed four valuable years of his boxing career when he suddenly retired in 2005 after suffering a series of debilitating injuries.

At the time of his retirement, Klitschko was the WBC heavyweight champion and was considered by many boxing experts to be the number #1 heavyweight in the entire division, better even than his younger brother, Wladimir Klitschko.

After resting up and healing for four years, Vitali came back to boxing last year, and recaptured his WBC title by stopping Samuel Peter in the 8th round. Since then, Vitali has defended the title twice, beating Juan Carlos Gomez and now Arreola in one-sided fights. With the ease with which Klitschko is able to defend his title, it seems rather perplexing that he would even consider retiring from the sport.

He’s so dominant that barring any future injuries, Vitali could probably defend his title for another four to seven years without having to struggle. Vitali is so much better than his competition that the fights end up being non-competitive even against the best of fighters.

One problem that Vitali has, though, is the lack of big named opponents for him to make money on. The heavyweight division only has a small handful of popular fighters with his brother Wladimir being on, and then perhaps David Haye and Nikolay Valuev being the other two. Vitali doesn’t want to fight his brother, which leaves Haye and Valuev.

Vitali attempted to fight Haye a couple of months ago, but Haye backed out and opted to fight the much safer Valuev. Haye will be an option for Vitali if he can defeat Valuev in November in their title match. Unlike the lighter divisions where fighters can pick out opponents from the lighter and heavier weight classes to fight to make money against, the heavyweights don’t have the same opportunities.

The cruiserweight division has no real stars other than a couple of halfway popular fighters, and the size disparity between them and the giant heavyweights like the Klitschko brothers is fairly dramatic. You can’t just say let’s fight at a catch weight because a 250 pound heavyweight like Vitali could never lose enough weight for it to meet at a competitive catch weight.

In some cases, a cruiserweight can move into the heavyweight division and put enough weight for them to get in the 220 to 230 range. However, they’re generally still too small to beat the best heavyweights like the Klitschko brothers. Haye is an example of a cruiserweight moving up in weight. He’ll most likely be destroyed easily if he ever meets Vitali or Wladimir in the ring because of his lack of size.

In addition, Klitschko can’t choose a fighter from two divisions below him like Floyd Mayweather Jr. recently did in fighting lightweight Juan Manuel Marquez, because the light heavyweight division has a weight limit of 175, and to ask them to bulk up to heavyweight would be nearly impossible for them to do without hurting their body when they have to move back down in weight.

Also, unless they’re facing a mediocre heavyweight, the light heavyweight fighter is going to be destroyed. Roy Jones Jr. was able to move up in weight and win a heavyweight title in the past, but he was facing John Ruiz, a smaller heavyweight and not one of the hulking 250 Klitschko brothers.

« Will Khan ever Be an Elite Fighter?

Is a Fight Against Mosley Not a Good Business Move for Mayweather? »