Will Khan ever Be an Elite Fighter? 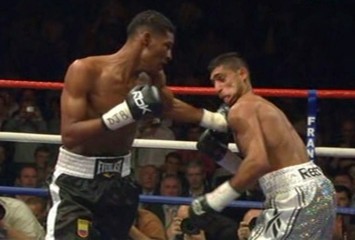 By Jason Kim: When I say elite, I mean in the class of super star like Floyd Mayweather Jr., Manny Pacquiao, and Juan Manuel Marquez and to a lesser degree Ricky Hatton. Khan, 22, mentioned recently that he’d like to be at the level of Marquez and Mayweather in a year’s time from now, and that’s really admirable that Khan wants to get to that level, but is it really possible or is this just wishful thinking on Khan’s part.

Right now I don’t see Khan as being improved enough to fight at higher level in a year. Khan has been selectively matched since losing to Breidis Prescott in a 1st round blowout last year, being out in with an old Marco Antonio Barrera and a light hitting Andriy Kotelnik.

Neither fight answered any questions about Khan’s reputation for having a glass jaw. Khan’s next opponent, an inexperienced Dmitry Salita who comes into the fight with a vastly inflated record of 30-0-1, 16 KO’s, will also likely not tell you anything about Khan’s talent other than that he can beat up a green fighter with an inflated record.

I’d like to think that Khan would be put in with some good fighters after the Salita bout, but if good means another non-puncher, then I’m not going to get excited about Khan’s next opponent.

He’s going to have to have the training wheels taken off at some point if his management wants Khan to get to the next level. Fighting exclusively weak punchers to protect his fragile chin won’t do the trick for Khan in making him a better fighter. That’s the whole thing.

Marquez, Pacquiao and Mayweather were never afraid to fight all kinds of fighters. They didn’t duck or dodge opponents while on the way up. They took them on and beat them. Even Hatton took on some tough fighters on his way up, albeit old ones like Ben Tackie, Vince Phillips and Kostya Tszyu.

It would have been preferable if Hatton had taken on someone like Mayweather or Marquez early on, but unfortunately, Hatton wasn’t put in with them. Maybe Hatton would be a better fighter now if he had fought those guys when he was coming up. But Khan, he needs to have some fighters that have the talent to make him fight to the limits of his talent.

He can’t keep fighting opponents like Barrera, Kotelnik and Salita if he wants to get to the level where Mayweather and Marquez is at. Certainly, Khan will be able to keep his record looking nice, sell tickets and make money by fighting the lesser opponents but he won’t improve nearly as much as he would if he was put in with top fighters.

I know that Kotelnik and Barrera are technically top fighters, but I don’t consider them in the class of some of the other light welterweights that Khan should be fighting. It might be a bad idea for Khan to have the World Boxing Association title if it means that he’s going to have to waste title defenses against mandatory challengers that the sanctioning bodies designating.

A lot of the time, they’re choosing fighters that don’t have much talent and have no business challenging for a title. It’s waste to fight those type of opponents for a fighter that is still improving like Khan and who wants to be the best.

« News – Vitali Klitschko to face Johnson or Maskaev in December