By Jim Dower: In a night of huge mismatches at the Desert Diamond Casino, Tucson, Arizona, 2008 U.S. Olympic Bronze Medalist Deontay Wilder (7-0, 7 KO’s) destroyed Travis Allen (3-5, 3 KO’s) in the 1st round. The win for Wilder, 23, extended his 1st round knockout string to six consecutive fights and kept his perfect knockout record intact with seven knockouts in seven fights.

The 6’7″ Wilder dropped the badly over-matched Allen twice in the round, knocking him down first with a short left hook and then finishing him with two clubbing right hands to the head. The bout was stopped after the 2nd knockdown by the referee. Wilder, a heavyweight project with a big right hand, showed improvement in his jab. 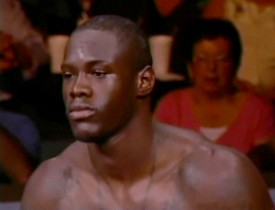 In fact, Wilder’s jabs were thrown with a lot of power and he used them to drive the 30-year-old back shortly before knocking him down with a left to the head. After the first knockdown, Wilder seemed to forget about using his jabs or any left hands as he went right hand crazy, hitting Allen with five consecutive clubbing right hands that dropped Allen for the second and final time in the fight. Although Allen made it to his feet at the count of nine, the referee decided to stop the bout anyway.

It was a good win for Wilder because it showed that he’s adding some other weapons besides his huge right hand. I would have liked to have seen him use his left after hurting Allen, but I’m sure Wilder will become more balanced in his attacks as he improves in the future. At 23, Wilder is a long range project with possibly three to four years before he’ll be ready to challenge for a title if he makes it that far.

Former World Boxing Association light welterweight champion Vivian Harris (29-3-1, 19 KO’s) needed to be taken out of the ring on a stretcher after clashing heads with Noe Bolanos (20-4-1, 12 KO’s) in the 2nd round of a scheduled 12-round bout. 40 seconds into the 2nd round, Harris and Bolanos moved forward at the same time and collided with their heads, sending Harris backing away and holding his head in pain.

Harris then walked over to his corner where he collapsed and appeared to lose consciousness. He was then taken out of the ring on a stretcher after he came to. The fight was ruled a no contest. The head clash didn’t appear to be all that hard, but it Harris was hit in the temple area of his head, which is a vulnerable area and can cause problems if a person is hit in that area.

In the 1st round, the taller 5’11” Harris controlled the action using his jab against the shorter 5’9″ Bolanos. Harris looked good in the round, standing straight up and shooting his jab out again and again into the face of Bolanos. Aside from the jabs, there were few significant punches thrown in the round.

Undefeated heavyweight prospect Seth Mitchell (13-0-1, 8 KO’s) stopped Andrae Carthron in the 1st round with a big right hand to the head. Mitchell, 27, backed Carthron to the corner and was tagging him with right hands while Carthron covered up and tried to block the shots.

One of Mitchell’s powerful right hands went around the gloves of Carthron, hitting him just behind the ear and sending him down on the canvas. The fight was then stopped at 2:36 of the round. Mitchell, a former college football player for Michigan State, showed a lot of power in both hands and worked Carthron over with nice combinations to the head and body in the round.

With his power, Mitchell is going to be someone to keep an eye on in the future. His one liability is that he’s only 6’2″, and may have problems dealing with the taller heavyweights. However, he’s plenty powerful and big at 244.

Undefeated welterweight prospect Keith Thurman (10-0, 10 KO’s) looked very impressive in destroying Travis Hartman (10-14-1, 7 KO’s) in the 2nd round. Thurman, 20, a former amateur standout and 2008 Olympic Trials Silver Medalist, dropped Hartman twice in the 1st round, once with a right hand and another time with a jab. It was target practice for the most part as Thurman viciously attacked the over-matched Hartman, 26, who came into the fight having lost five of his last six bouts.

There was very little coming back from Hartman in the opening round, as Thurman stalking him around the ring firing off big power shots one after another. Hartman took a knee after getting hit with a big right hand while in the corner for the first knockdown in the 1st round.

In the 2nd round, Thurman battered Hartman while he stood trapped in the corner for an extended amount of time, hitting him with a massive amount of punches, mostly right hands, until the bout was stopped after Hartman’s corner threw in the towel. The fight was officially stopped at 1:00 of the 2nd round.

Thurman looked good out there, showing excellent power and a nice punch assortment. However, he’s kind of small at 5’9″ for the welterweight division and might be better off moving down in weight to light welterweight. I could see him being a factor at that level. He’s not fast enough or big enough to compete with the welterweights in my view.

Although there are a lot of excellent welterweights that are the same size as him, but they have better hand speed and power than he does. He’ll probably get stronger in the future, but I still think he’ll have a better chance at success at light welterweight.