Jacobs vs. Walton, Lara and Wilder vs. TBA on June 26th – News 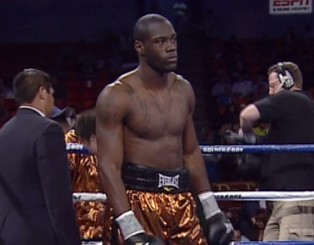 By Jason Kim: Unbeaten middleweight prospect Daniel Jacobs (16-0, 14 KOs) will be returning to the ring on June 26th against George Walton (20-3, 12 KOs) in a 10-round bout at the Desert Diamond Casino, in Tucson, Arizona. Also on the card will be heavyweight Olympic bronze medal winner for the United States Deontay Wilder (5-0, 5 KOs) and Cuban light middleweight prospect Erislandy Lara (6-0, 4 KOs, both fighters going up against still to be determined opponents.

Jacobs, 22, a 2004 and 2005 National Golden Gloves welterweight champion, as well as a 2005 National PAL champion. Jacobs is considered to be one of the best young prospects in the middleweight division, even though he still hasn’t fought anyone of note as of yet. In his last fight, Jacobs stepped up on the Ricky Hatton vs. Manny Pacquiao undercard on May 2nd, defeating light middleweight Michael Walker by an 8-round unanimous decision.

Although Jacobs got the win, he looked hardly unbeatable as Walker stalked him all fight long landing the harder shots and making Jacobs look worried under the heavy pressure from Walker. Before the bout, Jacobs had easily knocked out most of his C and D-level opponents in the early rounds of his bouts.

It got to the point where many boxing fans and writers seemed to be under the impression that Jacobs was a knockout artist with incredible power. Instead of looking at Jacobs’ pitiful opposition and putting two and two together, a great many boxing people seemed to crown Jacobs at the next great thing before he’d even been in with anyone halfway decent.

Walker proved to be that halfway decent fighter for Jacobs and had Daniel on the run for virtually all eight rounds of the fight. Jacobs came out fast in the 1st round, and basically shot his load trying to knock Walker. Jacob’s punches, which looked like weak flurries, had no effect on Walker who shook his head, as if to say ‘you can’t punch.’

Walker then turned around and began stalking Jacobs, landing surprisingly the much harder shots for the remainder of the fight. Jacobs turned into a boxer, reminding me of a combination of Floyd Mayweather Jr. and Roy Jones Jr.

This is perhaps the way that Jacobs will be fighting once he gets past the lower level fighters and starts fighting opponents that have a pulse. On June 26th, Jacobs will likely score a quick knockout because Walton isn’t what I consider to be a 1st tier fighter, and is a more of an opponent that is two steps back from Walker.

However, at least Jacobs is now fighting 10-round bouts since he’s been moved up from the eight round bout that he was put at in his last two fights, although only one of his fights went the full distance.

Wilder, 23, is an intriguing fighter, a six-foot seven inch heavyweight with incredible power in his right hand but not many other tools besides that. For a fighter his height, he fails to use his jab which is one of his underdeveloped tools that needs work along with his left hand and his defense. At 215, Wilder is still very slender for his height and needs to put on a good 30 pounds before he can challenge the bigger heavyweights in the division like the Klitschko brothers, Chris Arreola and Alexander Dimitrenko.

If Wilder can develop some other tools to go along with his awesome right hand, he’ll be hard to beat. In his five fights thus far, Wilder has chopped down each of his opponents with brutal right hands and little else. Wilder has enough power in his right hand to beat anyone in the heavyweight division but he’s very predictable because of his over reliance on using his right hand.

Lara, 26, has looked very polished in his six fights as a pro, looking like a pro with many more fights than that. No doubt Lara’s extensive amateur experience in which he finished 350-17 has a lot to do with him being so prepared for the pro level. Lara has looked sensational as of late, beating Chris Gray and Edwin Vazquez in the past in the past month.

Chagaev vs. Klitschko: Is Ruslan a Tougher Opponent Than Haye? »