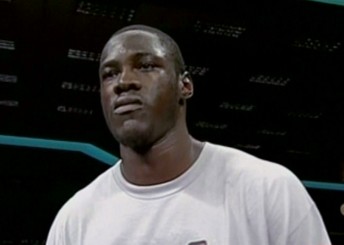 By Jim Dower: Undefeated heavyweight prospect Deontay Wilder (6-0, 6 KO’s) made quick work of an over-matched Kelsey Arnold (1-3-2) last night, stopping him in the 1st round at the Desert Diamond Casino, in Tucson, Arizona.

Wilder, 23, a heavyweight Bronze Medalist for the United States, flattened Arnold, 25, with a huge right hand, sending him down face first on the canvas where Arnold then rolled over on his back and was promptly counted out at 1:13 of the 1st round by referee Wes Melton.

Wilder showed a little bit more skills than he’s shown previously in his five other bouts, displaying a nice jab to go along with his howitzer of a right hand. In truth, Arnold was so bad that all Wilder needed was his right hand a lone to do the job, but Wilder’s jab was effective in setting up the right hand. The 6’7” 215 pound Wilder came out fast, shooting a powerful jab repeatedly into the face of Arnold.

Wilder then somewhat clumsily began to fire off huge right hands and hitting Arnold with big impacts. Surprisingly, Arnold stayed upright through at least 10 of the solid shots. At no time did Arnold fire anything back that landed, as he was too busy taking right hands to the head.

Wilder then fired off some decent left hands to the body, winding up on each one as if he was trying to knock Arnold cold with each shot. After hitting Arnold with a few left hands, Wilder went back to his jab momentarily and then finished the job with a big chopping right hand to the head that caught Arnold on the side of the jab sending him face down on the canvas where he was quickly counted out.

Overall, Wilder looked good when he was throwing his right hand. He can punch probably as hard as any fighter in the division with his right hand. However, given that the poor quality of his opponent it’s hard to tell whether Wilder is progressing as a fighter.

More than that, I can’t see how Wilder is being helped by being matched up with D-level fighters that fold in the first minute of action after getting plowed into by Wilder’s huge right hand shots. What Wilder needs most of all his an opponent that he can get some rounds in so that he can develop his left hand, jab and boxing skills, because right now he’s too raw and needs a ton of work.

At 23, Wilder is way behind the progress that most top heavyweights were at the same point in their careers, so he’s going to need to be pushed a little faster than he’s been. At this pace, Wilder could end up with 30 or 40 wins over C and D level opposition, yet still be as clumsy and dependent on his right hand that he was when he first turned pro.

Wilder needs someone that can stay in there with him long enough for him to develop his skills, and frankly a D class opponent that folds in the first minute of action isn’t going to get the job done.

« The Highs and Lows of Three Divisions – Boxing