News – Jacobs vs. Varela this Friday 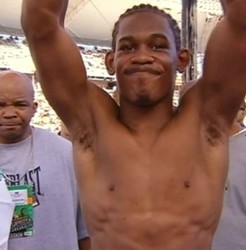 By Jason Kim: Undefeated super middleweight prospect Daniel Jacobs (14-0, 13 KOs) will be appearing this Friday night on ESPN against Nicaraguan Jose Varela (23-5, 16 KOs) at the UIC Pavilion, in Chicago, Illinois. The bout has mismatch written all over it as Varela, 31, has lost his last three bouts and normally fights two divisions below Jacobs at light middleweight. The only good thing I can think of in this fight is that Varela has a good chin and has been able to stand in there against big punchers like Edison Miranda and Richard Gutierrez without being knocked out. Then again, Varela was knocked out in the 2nd round by Marco Antonio Rubio six years ago in 2003, so it’s hard to tell what will happen with him.

The weight difference is going to be huge, as Jacobs is a much bigger fighter than Varela and has a lot more power than him.

This is a huge step up for Jacobs, who has been matched very carefully by his people and given very soft opponents. Jacobs has knocked out four of his last opponents after a poor showing against Emmanuel Gonzalez in a 6-round decision in September 2008. Jacobs can punch well, but he’s got short arms for a super middleweight, and often doesn’t throw jabs.

With him, it’s all or nothing as he seems to shoot for quick knockouts every time out at the expense of learning anything. His hand speed isn’t that great and his defense is wide because of his tendencies to go for quick knockouts every time out. I think he hasn’t progressed much as a fighter since turning pro because of the lousy opposition that he’s been put in with. I see Jacobs as trailing badly other super middleweights Andre Dirrell and Andre Ward in terms of boxing skills.

I have my doubts that Jacobs will ever be good enough to beat fighters like them or someone like Mikkel Kessler. It’s certainly possible, but he needs a lot of work and needs to develop other parts of his game instead of just his power. He reminds me a lot of a younger version of Jeff Lacy, but not nearly as powerful as Lacy was back then.

Also on the card is 2008 heavyweight Bronze Olympian for the United States Deontay Wilder (3-0, 3 KOs) against a still to be determined opponent. Wilder, 6’7″, 213 pounds, has good size and excellent power in his right hand but not much else going for him. His hand speed is poor, and he’s clumsy and very raw.

He’s a work in progress and has a lot to learn before he’s ready to tangle against better opponents. His weight is very low for his height and he’s got to put on more muscle so he’s not bulled around by more powerful heavyweights like the Klitschko brothers. The good news is that he’s only 23, which gives him a chance to learn more without worrying about him needing to take on fighters that would be far too good for him at this stage of his career.

Wilder hasn’t looked very impressive in stopping his first three opponents since turning pro in November 2008. Against Shannon Gray in March 2009, Wilder went head hunting with his right hand and quickly dropped the 1-0 Gray with a left hand. Previous to the knockdown, Wilder showed his amateurish background by turning his back on Gray while being attacked. It looked like something from a fight that you’d see on the play ground rather than from someone with Olympic experience.

Although Wilder eventually took Gray out with a left hand, Wilder still looked clumsy and showed terrible aim in trying to land his right hands. Wilder didn’t look much better in stopping Ethan Cox in the 2nd round in November 2008. In this fight, Wilder threw a lot of clubbing right hands and basically used nothing else to batter Cox into the canvas.

Cox went down and stayed down for a long time after getting dropped. There’s nothing wrong with Wilder’s power, at least in his right hand, but the rest of his game needs serious work. He’ll never be a fast puncher but he needs to learn to use other tools besides just going right hand crazy in every fight.

He tends to paw with his jab and reminds me a lot of British heavyweight Audley Harrison, only much worse in that department. Audley actually looks a lot better than Wilder, which shows how much work that Wilder has in front of him.

« Could Froch Abandon England For the United States?