Kermit Cintron Moving up to 154 To Fight Sergio Martinez 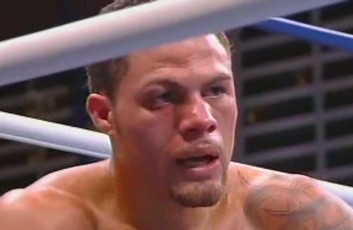 By Manuel Perez: Kermit Cintron (30-2, 27 KOs) will take on Sergio Martinez (44-1-1, 24 KOs) for the interim WBC light middleweight title on February 14th. The date was left open for Cintron after Joe Greene was unable to make the fight with Martinez due to kidney stones. Next, Daniel Santos stepped in but he needed more time to train, wanting to fight in March rather than February.

Cintron, who was previously going to fight IBF welterweight champion Joshua Clottey, decided to move up for the chance at a better money fight against Martinez. The weight is only a seven pound difference for Cintron, and he shouldn’t have problems against the slightly bigger Martinez.

Cintron, 29, gets the chance to prove himself against Martinez, a crafty fighter from Argentina who is known for having excellent boxing skills and good movement. Cintron is trying to win back fans after losing his IBF welterweight title to Antonio Margarito in April 2008.

This was Cintron’s second knockout loss to Margarito, having been stopped by him three years earlier in a 5th round TKO in 2005. Many people thought that Cintron was crazy for wanting to tempt fate and fight Margarito again, as he just seemed like a bad match-up for him. Margarito, with his steel chin and his high work rate, was able to weather the early storm of Cintron’s huge right hand bombs and then come on and beat Cintron down in the 6th.

Picking up the pieces from this defeat, Cintron rebounded well, beating Lovemore N’dou by a 12-round unanimous decision in November in the IBF welterweight title Eiminator.

With his big power, Cintron could give Martinez some problems, but it won’t be easy. Martinez likes to stay on the move continuously and he’s difficult to pin down. In his only loss of his career, Martinez was stopped by Margarito in 2000, a fight in which Margarito kept constantly coming forward, pressuring Martinez and forcing him to fight on the ropes.

Martinez fought well in the fight until the 6th, when Margarito’s, heavy pressure began to get to him. Cintron, it would seem, will probably need to keep right on top of Martinez and not let him hit and run like he likes to do. Cintron isn’t a very effective pressure fighter, ending to be a little slow in cutting off the ring.

If he’s to have any chance at winning, Cintron is going to need to work on this part of his game otherwise he’s going to get a boxing lesson from Martinez. Win or lose, I don’t think Cintron should stay at light middleweight. They’re too many power punchers in the division with power perhaps even better than Cintron’s power.

Martinez, 33, is coming off arguably his best win of his career, an 8th round stoppage of power puncher Alex Bunema in October. Martinez gave Bunema fits, making him miss with his big shots and tagging him often. Martinez looked like a younger version of Roy Jones Jr. the way that he moved around the ring with both hands down, daring Bunema to hit him and punishing him with fast combinations. Martinez really increased his stock in that fight, as it was shown throughout the U.S and Canada, letting many people see Martinez for the first time.