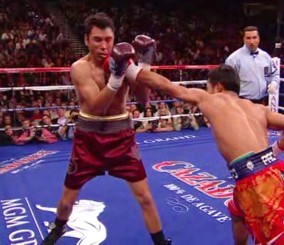 By Jason Kim: Since losing to Manny Pacquiao in a brutal eight-round beat down on December 6th, there have been various explanations as to the main reason that Oscar De La Hoya (39-6, 30 KOs) lost in such a terribly manner. The excuses have ranged from De La Hoya’s diet, which was more or less a starvation-based weight loss diet according to some, to Oscar not being comfortable with Pacquiao’s southpaw stance.

The main reason for his loss may never be known for sure, but in watching him in future fights – if he does decide to continue fighting, that is – we can perhaps rule out one or more of the causes. To be sure, De La Hoya will probably never be fool enough to fight in the welterweight division again, but if he does, he will probably do come in at close to 160 and simply dehydrate before the weigh-in like most fighters do.

That would mean that he there would no possibilities of excuses on his part made later saying about his diet. Right now, I would lean in the direction of his diet playing the major hand in his poor performance.

De La Hoya’s age, 35, obviously contributed to it as well but I don’t think it’s as big a reason as some people might think. That’s really not that old for a fighter and given the dramatic drop off from his performance against Steve Forbes, a fight which took place only seven months prior to his bout with Pacquiao, and that of his bout with Manny, it couldn’t be age.

De La Hoya was still fighting fairly well in his fight with Forbes in May 2008, and he couldn’t have aged that much in only seven months. At De La Hoya’s age, he should have been able to fight hard for at least six rounds instead one, which is all he seemed up on against Pacquiao.

In some rare cases, a fighter can age over night but that’s usually from either not training enough, overeating and getting fat, abusing oneself with alcohol or drugs, or taking a lot of punishment in a bout. In De La Hoya’s case, he hadn’t taken a vicious beating prior to his fight with Pacquiao. Sure, he took some head shots from Forbes and ended up with some puffy eyes but he didn’t take a bad beating like some fighters.

Pacquiao’southpaw stance may have been problem for Oscar, as he’s faced few southpaws in his career. However, I don’t buy that excuse because for the simple matter that De La Hoya had previously fought southpaws in training for the Pacquioao and clearly had to have had a lot of sparring with them.

Also, in his long and successful amateur career, De La Hoya often had to face southpaws, so it’s not exactly as if he had never fought those type of fighters before and wasn’t ready for them. It was probably no picnic fighting a southpaw like Pacquiao, but I don’t see that as being the main factor in De La Hoya losing.

Certainly, Pacquiao’s hand and foot speed had to have been something that De La Hoya wasn’t exactly prepared for. There’s not many fighters as fast as Pacquiao and few that can quickly get in and out of range like Pacquiao frequently does. Sparring, in this case, wouldn’t really help De La Hoya a whole lot because none of his sparring partners were fast enough or skilled enough to truly mimic Pacquiao’s style of fighting.

« Would David Haye Be Better Off Fighting Odlanier Solis?