Where Does Manny Pacquiao Stand With The All Time Greats? 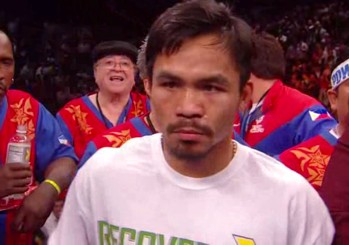 By Adam McGarry: This is always hard, to predict where someone will end up in the all-time pound for pound list. Not just because of the fact his career isn’t finished, but you never ever know what’s around the corner for any fighter. With Manny fighting from flyweight to welterweight there are so many things to consider, but I’d like to try and break it down and see if we can find a place for him in history. There’s a few categories to analyze and go through with a fine tooth comb, but for the sake of it we’ll try.

What a good one to start with. The list reads like few other fighters of the past 20 years, especially in the lighter weights and is nearly a who’s who in light weight boxing. Having fought mainly the Philippines in the beginning of his professional career, he racked up an impressive 32 – 2 (22 KO’s) record fighting mainly his countrymen. He made his American debut in 2001, six years after turning pro. By 2003 he was stepping up to face the legend in Marco Antonio Barrera and ended up stopping him in the 11th, after flooring him twice earlier on. Then there’s the unforgettable fights with Erik Morales, which although he lost the first in a unanimous points win, he won the trilogy overall with a TKO in the second and a brutal 3rd round KO in the third fight. In between those two Mexican greats, he fought another exceptionally talented Mexican in Juan Manuel Marquez, flooring him three times early on then fading and coming to a draw. Although he’d later, somewhat controversially, beat Marquez.
Three Mexican greats, that could be enough for any fighter to have a claim to greatness, throw in another fine Mexican in Jorge Solis and a tough David Diaz and there’s a serious record. The Mexicutioner he definitely is, with the four already named there’s Oscar Larios and Hector Velazquez as well so he’s really put a dent is a stable of some great and good Mexicans. And don’t forget
of Mexican descent Oscar De La Hoya, an all time great in his own right.

Quality Of Opposition Not Fought:

This one is kind of a no-brainer, considering he’s had two fights with Marquez, two with Barrera and three with Morales in just over 5 years tells you he wasn’t too bothered about fighting the division rated fighters, more about the best fighters of that time. Not just once, but two rematches and a trilogy doesn’t give much room to go off and pursue other things. We’ll always want a Juan Manuel Marquez trilogy, and I believe we’ll get it, eventually, but just not yet. So with him being tied up with a three way demolition with Mexican greats, it’s hard to expect him to have faced too much a quality opposition earlier on. If we really wanted to knit-pick, we could say a rematch with Singsurat after being beaten in 1999 and maybe something’s missing from light welter weight (soon to be corrected) but other than that, when Manny’s had the chance to fight the best, he has.

Titles Won And At Which Weights:

With him starting at light flyweight no less, this category is something of a tour through the lower weights as a champion. The first legitimate world championship Manny Pacquiao won was the WBC flyweight title in his 24th fight, after that he made a jump of 9 pounds to fight at super bantamweight, claiming the IBF title against Ledwaba nearly two years after losing. Manny failed to unify two belts in this division with a draw with Agapito Sanchez after some questionable head butting, but then made the leap to fight what’d be the start of a great rivalry in Juan Manuel Marquez at featherweight, bringing him to a draw. The next time Manny got a chance to gain some gold was against Erik Morales for the vacant WBC International Belt and the vacant IBA belt at super featherweight. But Manny gained the iconic WBC Super feather weight belt after defeating Juan Manuel Marquez not so long ago and then making another divisional jump to lightweight to claim another WBC belt at another weight, stopping David Diaz. A massive and mind-blowing weight jump to fight Oscar De La Hoya at welterweight has made him a top rated welterweight. 10 weight classes, from light flyweight to welterweight, an increase from 106 – 142lbs winning 6 titles of one kind or another and two ring magazine belts at featherweight and super featherweight. He’s made a total of 17 title defenses across his career (not including ring magazine defenses).

Pacquiao is a boxing fans dream, explosive exciting and never fails to deliver entertainment. He’s been in some all out wars and some of his fights deserve their own wall in the hall of fame. He was worshipped as a icon for the people in his native for a long time. He is their pride and joy, their finest export since Flash Elorde and Luisito Espinosa and surely will surpass them by the time he’s done. A very humble and likable guy, he is not the animal he is inside of the ring out of it. A true gentleman and has admirers globally, which very few fighters can truly achieve.

This guy is more popular than his country’s own prime minister, now that’s popularity.

The best may be yet to come, there may be more to come from the little Filipino, or is that a big Filipino now? But whatever he does, he sure as anything is one of the greats of our era and is always going to be remembered, not just by his own people, but every single person who has ever seen him fight. He surprised us with a win over Barrera, then Morales, then Marquez and finally blew us all away with a win at welterweight against De La Hoya. Does anyone doubt that Manny may have some more for us up his sleeve? I hope so. Probably the most accomplished, decorated and popular fighter the Philippines has produced by the time he’s done with the sport.

But in all time greats, surely he’ll be rated around super-feather and lightweight, he’ll sneak in the top 50 in my opinion, but you never know. He may go even higher.

Floyd Mayweather vs. The Winner of ‘The Hitman’ vs ‘Pac Man’ »