Does Pacquiao’s Victory Signal The End For De La Hoya? 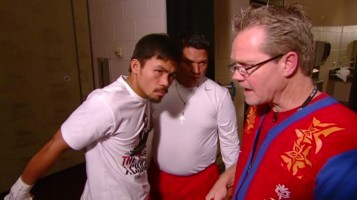 By Michael Williams: In Zaire, 1974, Muhammad Ali beats George Foreman in the eighth round to re-establish himself as one of the greatest boxers of all time. In 2002 Lennox Lewis places himself into boxing folklore after knocking Mike Tyson to the canvas in the eighth round of their clash in Tennessee.

On Saturday night it was another eighth round performance that set Manny Pacquiao on his way to boxing greatness, but it signalled the end of another legend of the sport. The manner of defeat suffered by Oscar De La Hoya confirmed that the dominant Pacquiao is the worlds best pound for pound fighter and that the Golden Boy’s career now lies in promotion.

Even before the first bell it was evident that Pacquiao, the pre fight underdog, was the more relaxed of the two fighters. Bearing a wry smile the Filipino danced his way from his dressing room to the ring with the Las Vegas faithful anticipating a classic encounter.

In the other dressing room the experienced De La Hoya, wearing a steely face of determination, remained focused on the task ahead. Perhaps concerned with the expectation of being favourite, and fighting at a weight he hadn’t fought at for eight years, De La Hoya didn’t have the same spring in his step that Pacquiao had on his way to the ring.

The pre-fight talk was about the larger De La Hoya dominating Pacquiao, who weighed in well below Welterweight limit, but as soon as the fight began it was clear that the speed of Filipino’s finest was going to dominate the bout.

It was labeled as the ‘Dream Match’ but for Oscar De Le Hoya it quickly turned into a nightmare.
From the first bell Pacquiao was the brightest, and smartest, boxer on show. He put a marker down for the rest of the fight by quickly getting on top of Del La Hoya and picking his shots while the Golden Boy struggled to keep up the with pace. By the second round it was clear that this fight was not going to go as many had predicted in the weeks leading up to it as Pacquiao’s dominance grew and left Del La Hoya with no answer but to last as long as possible.

It was a sad sight to see a once great champion reduced to a punching bag as the Las Vegas crowd witnessed the end of an era.

Del La Hoya will, however, be involved in Pacquiao’s next fight as he will part of the promotion team to set up Ricky Hatton’s clash with the best pound for pound fighter on the planet. A clash, presumably at Wembley Stadium, will be as highly anticipated as Pacquiao’s last fight.

A rejuvenated Hatton put in a classy display to beat Paulie Malignaggi in Las Vegas last month and put his Floyd Mayweather defeat fully behind him. A fight between Hatton and Pacquiao would combine two fighters at the top of their form and promises to be an explosive contest.

A win for Pacquiao would confirm him as the worlds best pound for pound fighter while a victory for Hatton would realise a dream of becoming the worlds best in the sport he loves.