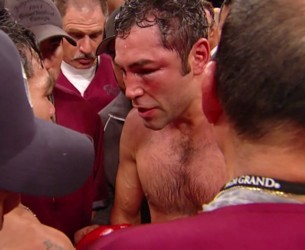 By Manuel Perez: According to the latest boxing news, the rumor has it that Oscar De La Hoya is troubled by his recent 8th round stoppage by Manny Pacquiao on December 6th, and is interested in a possible rematch with Pacquiao. Apparently, De La Hoya’s not happy with getting beaten down so badly, and doesn’t want to go out on a sour note like this. He’s also said to not be happy with his training, believing that he was over-trained for the fight.

If the rumors turn out to be true, De La Hoya would be quite right because he was badly weight drained for the fight and not anything near his normal ability on that night. In my estimation, Oscar looked to be about 50% of what he was in the Steve Forbes fight that had occurred just seven months earlier. De La Hoya looked to be completely starved for the fight with not only important fat resources removed from his body, but also a considerable amount of muscle along with it.

If he wanted to make the 147 pound limit, Oscar needed to get down to around 160, and then dehydrate to make the weight limit rather than taking off a ton of weight and trying to fight at that weight. De La Hoya was further hurt for the fight because he didn’t have his trainer Floyd Mayweather Sr., and instead had a new trainer, “Nacho” Beristain, that he seemed less familiar with and comfortable.

Even with the starved condition that Oscar was on that night, I think with Mayweather’s guidance, he would have won the fight by using much better strategies against Pacquiao. De La Hoya seemed lost without the calm, confident guidance from Mayweather Sr., who has had a calming effect on De La Hoya in fights where the going was getting especially tough.

The question is, would Pacquiao give De La Hoya rematch if he asks for one and would the pubic want to see another fight between the two? I think Pacquiao would fight him again, but only after Pacquiao faces both Ricky Hatton and possibly Floyd Mayweather Jr. After fights with both of them, De La Hoya will be Pacquiao’s biggest option available for another big money fight, and depending on whether or not he’s successful in beating Hatton and Mayweather, he might be interested in a fight with De La Hoya.

This time, however, Pacquiao would be facing a whole different De La Hoya, one who would be coming into the fight at a proper weight and not starved like he was last time. Also, De La Hoya would probably have Mayweather Sr. back working his corner, making Oscar that much more dangerous.

How Can Haye Defeat Vitali? »