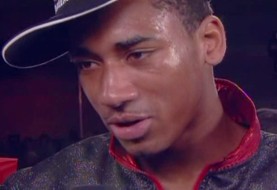 By Manuel Perez: Light middleweight prospect Demetrius Andrade (1-0, 1 KOs) destroyed a badly over-matched Patrick Cape (4-3, 2 KOs) in a 2nd round TKO on Thursday night at the Northern Quest Casino, in Airway Heights, Washington. Andrade, a 2008 Olympian boxer for the U.S., put on an impressive display of accurate power-punching, dropping Cape twice near the end of the first round. After the second knockdown at the start of the 2nd round, a long left to the head, referee Paul Field stopped the fight at 0:24 of the round. Andrade, 20, had a significant speed and size advantage over Cape, who normally fights at welterweight.

The southpaw Andrade battered the smaller Cape around the ring at the start of the 1st round, hitting him with straight left hands and powerful body shots. The speed difference between the two of them was startling, as Andrade showed speed similar to Jermain Taylor, although not quite as good combinations.

Cape landed almost nothing in the round, and retreated all around the ring trying to escape from Andrade’s big shots. Near the end of the round, Cape hooked Andrade’s right hand while in a clinch, but with his free left hand, Andrade pounded Cape with three hard body shots, causing him to go down. Cape got up at the count of seven and was able to escape the round without taking anymore punishment.

At the start of the second round, Andrade landed a hard right jab and then a long left hand that sent Cape flying backwards along the ropes, falling to the canvas. He got up but the fight was stopped anyway by referee Paul Field at 0:24 of the second. Cape’s nose was bleeding and he looked like he’d been through a buzz saw in the short time that he’d been in the ring with Andrade.

Andrade looked very impressive overall, about the second best prospect, after Daniel Jacobs, in American boxing. Hopefully, Andrade can move forward with experiencing any bumps along the way that might interrupt his progress. At 20, he amounts to be the future for the light middleweight and middleweight division.

In other action on the card, undefeated Russian super middleweight Maxim Vlasov (14-0, 5 KOs) defeated American Don Mouton (7-3-1, 7 KOs) by an eight-round majority decision. The final scores were 77-75, 78-74 and 76-76. I personally had Vlasov winning all eight rounds of the fight without much problem. Considering that he out-landed Mouton by a 224 to 106 margin, it seems almost laughable that one of the judges scored it 76-76. Although Mouton was landing the much harder shots, he only rarely reared back and unleashed one of his big shots during the fight.

Most of the time, he was getting hit with a constant rain of punches – uppercuts, hooks, jabs, you name, he was getting hit with them – throughout. At 6’3″, Vlasov showed the ability to fight both at a distance and at close range, outworking Mouton on the inside. It wasn’t perhaps the smartest thing for Vlasov to do, however, because it left him open for an occasional big hook from Mouton, but he got away with it for the most part. Vlasov threw a lot of punches in the opening round, some 99 shots as he out-punched Mouton who only could muster 37 of his own.

Fighting tall most of the time in a typical European style of fighting, Vlasov crowded Mouton, hitting him with short punches with little power on them. He didn’t seem to be looking to take Mouton out, just pile up points on him. In that, it worked because Mouton took a lot of head shots in the round by the light-hitting Vlasov. Mouton continued to be dominated in the 2nd round, but near the end of the round, he landed a big left hook to the top of Vlasov’s head, causing him to clinch for the remainder of the round to prevent Mouton from adding to it.

Vlasov fought back well in the 3rd round, dominating it with a downpour of shots to the plodding Mouton. Near the end of the round, Vlasov was cut over his left eye after clashing heads with Mouton while against the ropes. This seemed to give Mouton some confidence as he landed a few good shots as the round ended. Vlasov’s corner took good care of the cut, and it wasn’t a favor in rounds four and five for him. He continued hitting Mouton pretty much at will, beating him to the punch and using his head as target practice.

Mouton wasn’t much into blocking shots, because I can’t remember seeing him block a single punch from Vlasov during these rounds. In the 6th round, Mouton fought marginally better, landing some good right hands in a brief period in the middle of the round. However, as quickly as he started punch, he almost immediately stopped and resumed his punching bag status. Vlasov looked to be tiring in the 7th round, as his punches, normally weak, looked even weaker during this round. He mostly barely tapped Mouton to the fact and body, just making contact and pushing his punches as if he were underwater. Mouton, like usual, did absolutely nothing except to plod after Vlasov taking punches.

In the 8th round, Vlasov came back alive with new energy, once again bombarding Mouton with punch after punch from close range and at a distance. Mouton showed a little life of his own, landing a handful of punches in the round, but then going back into his turtle like shell and clamming up for the remainder of the round.

Overall, it was a pretty one-sided fight and I saw nothing close about to warrant giving Mouton anything other than possibly a mercy round or two. In actuality, he deserved nothing as far as I’m concerned. He didn’t land nearly enough. Vlasov didn’t look all that great either, and I see him having big problems if and he moves up against better fighters than Mouton. He doesn’t have the power to compete against the better super middleweights in the division, and his tendency to fight on the inside, will likely get him hurt sooner or later.

Hatton: His Career Is On The Line Against Malignaggi »