Thompson Wants Bout With Haye: “When I’m finished With Him [Haye] I Will Be The Reason He Returns his Ass To The Cruiserweight Division Where He Belongs” 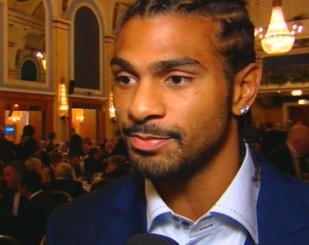 By Jim Dower: Newcomer to the heavyweight ranks David Haye (21-1, 20 KOs) has had no shortage of potential opponents since recently moving up in weight from the cruiserweight a couple of months ago. The latest heavyweight among many to call him out is none other than recent title challenger Tony Thompson (30-2, 18 KO’s), who was chopped down by IBF/WBO heavyweight champion Wladimir Klitschko on July 12th, at the Color Line Arena, Altona, in Hamburg, Germany. Obviously wanting to get back on top as fast as possible, the 6’5″ Thompson seems the soft-chinned Haye was the perfect opponent to achieve his goal.

Haye, 27, has been calling out Klitschko at every opportunity in the media, while at the same time downgrading him and all the other heavyweights in the division, calling them “slow” and “fat slobs,” among other things. Klitschko, however, is tied up with a mandatory challenger Alexander Povetkin for his IBF heavyweight title and doesn’t have an open date for Haye. Even if he had, though, Wladimir wants to see how Thompson does against another heavyweight, preferably a good one that will test his skills. This is exactly what Haye wants to do, commenting often that he plans on taking on a top heavyweight in the division and doesn’t want to waste time by taking on a lower ranked fighter the way that many heavyweights often do.

Former heavyweight champion Hasim Rahman is the name that has been most often brought up as Haye’s next opponent, but there are still many doubts about him winding up as Haye’s next opponent. Rahman didn’t exactly shine in his last fight with James Toney, fighting poorly after sustaining a cut over his eye and complaining about it in between rounds, leading to the stoppage of the fight. If Haye is looking for a tough challenge, Rahman may not be the fighter he’s looking for given how he looked against Toney.

Heavyweights Monte Barrett and Eddie Chambers also are interested in taking on Haye, but Barrett has already been ruled out as a potential opponent by Haye, who doesn’t see him as having a big enough name to excite the boxing fans. There hasn’t been any word about Haye’s feelings about Chambers, a fighter on the rebound from a 12-round unanimous decision loss to Alexander Povetkin in the IBF tournament in January.

Although Chambers fought well in the first four rounds of the fight, he quickly tired out after that and did little in the remaining rounds. The image of a tired out Chambers wasn’t exactly an impressive one, though it did show him to be a fighter that Haye, with his tendency to get hurt by big punchers, could probably beat without too much trouble. Obviously, Haye would want to improve upon the job that Povetkin did against Chambers, and try to get him out sooner if they should fight.

With Thompson, however, he may in fact be the best of what’s out there for Haye to fight at this point. With a long jab, decent power and a high work rate, Thompson would be a very tough customer for someone like Haye to deal with. He doesn’t have a big punch like Carl Thompson or Jean Marc Mormeck, but he has a chin, an awkward southpaw style, and if he can put his hands on Haye enough, he may succeed in hurting him and taking him out.

Thompson took Wladimir’s big right hands very well up until the 11th round when he was taken out by a crushing right hand. Thompson isn’t particularly impressed with Haye, saying “He can’t take a cruiserweight punch and he definitely will not be able to withstand the punishment that I will give him.”

With Thompson’s huge size and reach advantage, he would poise a huge nightmare for Haye, giving him an opponent that he would have problems matching up against. Haye has mostly taken on fighters his own size or smaller in his career and hasn’t had to deal with a super heavyweight the size of Thompson. It would interesting to see how Haye adjusts to Thompson’s reach and southpaw style.

Of all the opponents out there for Haye, none would likely get him as ready for Klitschko as the equally tall Thompson would. The big difference between them, however, would be Wladimir’s big power in his right hand and left hook. Thompson doesn’t come close to having as much power as Wladimir, but then again, he might not need it against the tender-chinned Haye.