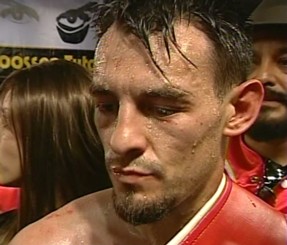 By Christopher Ferris: IBF featherweight champion Robert Guerrero (22-1-1, 15 KOs) totally dominated challenger Jason Litzau (23-2, 19 KOs), battering him around the ring at will before stopping him in the 8th round of scheduled 12-round bout on Friday night at the Tachi Palace Hotel & Casino, in Lemoore, California. The end came in the 8th round after Guerrero, 24, knocked Litzau down twice in the round with left hooks and right hands to the head. Referee David Mendoza moved in and stopped the fight at 2:25 of the 8th round.

The bout was mostly dull for the most part, as it was completely one-sided with Guerrero controlling most of the action. There’s nothing wrong with that, except that Guerrero appeared to win by default, because Litzau, 24, did next to nothing all fight long. He seemed badly afraid of Guerrero from the opening moments of the fight, so much so that he rarely let his hands go. Instead, Litzau mostly stood around attempting to get out of the way of Guerrero’s shots, and not doing a good job of it. The fight really should have been stopped after the 4th round when it became apparent that Litzau wasn’t into the fight and had no interest in punching back.

I wouldn’t have blamed his corner one bit if they had stopped the fight, for they would have sparred Litzau some needless punishment in the fight. I doubt that he would have won even if he had let his hands go, because Guerrero is simply a class above him, but at least he would have stood a better chance than by doing absolutely nothing but take shots to the head. For his part, Guerrero looked good as he worked the body well, pounding Litzau with a fierce body attack from the opening round. Later in the bout, Guerrero switched to landing combinations to Litzau’s head.

By round six, however, Guerrero began to tire out and was forced to slow down the pace considerably in order to rest. Unfortunately for Litzau, he was too limited a fighter and too intimidated to take advantage of the situation, because Guerrero was very vulnerable as the fight wore on.

In the first three rounds of the fight, Guerrero did most of the fight, as Litzau rarely threw any punches whatsoever. It was target practice for Guerrero, who fought out of an exaggerated crouch, hitting Litzau with hooks and straight lefts to the midsection. It was hard to stay interested in the fight, because it was just plain one-sided and boring to watch. It was worse than sparring because of Litzau’s body language, which seemed to say, “I really don’t want to be here.” Though he’s ranked #9 in the IBF, Litzau looked more like a fighter than was artificially ranked that high. Before this bout, Litzau hadn’t been in with any fighters as close as good as Guerrero, and should have never been in the ring with him in the first place in my view. Guerrero, however, didn’t have the power to take Litzau with one shot, due to Guerrero being more of a fighter with marginal power that require for him to pound away at his opponents over the course of a bout to eventually stop them. That’s too had for Litzau, because it meant that he would be beaten even worse than he would have if Guerrero was a big slugger.

In rounds four and five, Guerrero continued landing effectively to the body. At the same time, he started revealing a little dirty fighting by holding Litzau around his waist with his right hand and pounding him with his left hand to the body and head. Litzau complained about this to the referee, but nothing was down about, and subsequently Guerrero continued to do this for the remainder of the bout. He didn’t need to do this, for the fight was totally lopsided, but it kept things entertaining wondering whether the referee would ever call this foul.

In round six, Guerrero began to fade a little, slowing down considerably. It wasn’t be design, Guerrero just looked tired out as if he had hit a wall. Litzau, however, didn’t have the talent to take advantage of it to take over the fight as would a much better featherweight like Chris John would certainly have.

Litzau’s nose and left side of his eye began to bleed in the 7th round, and it appeared that his nose was broken. Whatever chance he may have had to get back into the fight went down the drain when his nose got busted up in this round.

In the 8th round, Litzau came out looking like a defeated fighter. It didn’t seem that it would go much longer, because his nose was a mess and he looked beaten. Seconds into the round, Guerrero ran into him like a ram, clashing heads with Litzau. As soon as the action resumed after a stern warning from the referee, Guerrero landed a left jab, and then a left uppercut followed by a left hook that dropped Litzau. Wearily Litzau dragged himself off the canvas before he could be counted out. As soon as the fight resumed, Guerrero was all over Litzau, throwing wild shots and missing most of them badly.

However, two right hands finally landed perfectly to the head of Litzau, knocking him flat to the canvas. This time, the referee David Mendoza moved in and stopped the fight at 2:25 of the 8th round. Guerrero hadn’t escaped unscathed, as he had a huge bruise under his right eye, no doubt a product of one of Litzau’s big right hands.

Tyson-Holyfield: Does This Fight Interest The Public? »