Calzaghe vs. Kessler: Is Joe Looking Past Mikkel? 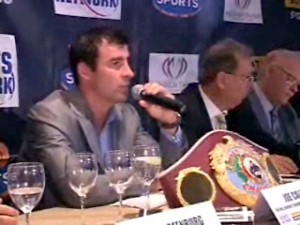 At this point, there’s quite a few people that are picking Calzaghe to lose the bout, mostly because of his advanced age (35) combined with the fact that Kessler, 28, has appeared very strong in his last few bouts with impressive wins over Anthony Mundine, Eric Lucas, Markus Beyer and Librado Andrade. Kessler has knocked out two of them – Lucas and Beyer – while badly outpointing Mundine and Andrade.

In those bouts, Kessler had shown almost no weaknesses on defense, while also showing an excellent jab and powerful right cross. Though he’s not really a powerful slugger, he fights soundly, slowly wearing down his opponents with his jab and right hand. Add to that his physical nature of fighting, which involves an occasional elbow and forearm to the head, which makes him even tougher. he moves really well on the outside and is difficult to trap against the ropes or get inside on.

Indeed, most of his opponents are left with nothing but air when they attempt to move within punching range, in part because of his constant shifting of positions.

Kessler has recently employed Sakio Bika as a sparring partner for him, a move done perhaps to learn more about Calzaghe’s figting tendency’s given the fact that Bika previously fought Calzaghe in October 2006. According to Bika, Kessler is a much tougher fighter than Calzaghe, and he feels that Kessler is going to have an easy time beating him. Bika would know, having given Calzaghe a very tough time in their bout.