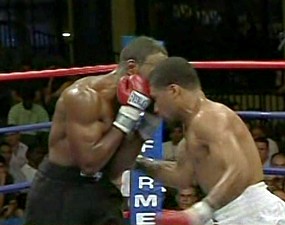 Welterweight prospect Shamone Alvarez (19-0, 11 KOs) defeated Germain Sanders (27-4, 17 KOs) on Friday night by 12-round unanimous decision at the Boardwalk Hall in Atlantic City, new Jersey. At stake, was Alvarez’s NABO welterweight title, which he retained by defeating Sanders. The bout was from interesting, however, as both fighters lacked any real power to speak of and thus spent much of the bout landing rather weak looking combinations. Going into the bout, Alvarez was the fighter to keep an eye on, as he’s being hyped for a potential challenge for the WBO title at some point in the near future, but after watching him fight on Friday night, I’m hoping he avoids fighting for the title for a little while longer, because he’s not ready at this point.

Though, at 30, it’s hard to say how much better he’s likely to get in the next year or two, but whatever the case, he needs to work on his power before he takes on better fighters and risks losing badly. Against Sanders on Friday night, Alvarez stayed busy in the early rounds, focusing on throwing combinations to Sander’s head and midsection.

Sanders, 37, was even worse, throwing very few punches and looking over cautious, as if he was facing a knockout puncher rather than the feather-fisted Alvarez. When he did finally decide to start punching – at the urging of his corner – in the sixth and seventh rounds, Sanders showed good power in his right hand, as he pummeled Alvarez with shots. In the eighth and ninth, Sanders stopped punching again and let Alvarez control the action with his soft combinations.

By this time, I could barely keep my eyes open due to boredom watching these two go at it. However, I forced myself to continue watching somehow, and I was glad that I did, because Sanders once again came alive and controlled the action in rounds ten though twelve, hitting Alvarez with a number of sharp right hands that snapped his head back each time. Unfortunately, Sanders wasn’t able to land a knockout punch, and came out on the losing end due to his late surge in the fight.