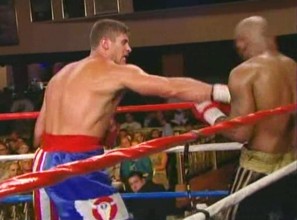 By Dave Lahr: Heavyweight challenger Tye Fields (39-1, 35 KOs) completely dominated an intimidated looking Domonic Jenkins (12-7-1, 6 KOs), stopping him in 7th round after Jenkins failed to come out for the 8th round on Thursday night at the Hard Rock Hotel and Casino in Las Vegas, Nevada. Jenkins, 34, looked like he didn’t want to be there from the opening bell, as he rarely threw punches, and instead mostly stood in front of Fields and absorbed continuous punishment for seven rounds. The fight perhaps should have been stopped as early as the fourth round when it became apparent that Jenkins was not interested in exchanging punches with the 6’9″ Fields. Although it’s hard to understand why not, since Fields didn’t present any semblance of defensive ability all fight long, with his main focus being his offensive output.

Fields, 32, threw a lot of punches during the fight, averaging an incredible 94 per round. However, it was slightly less than his usual enormous punch volume, perhaps in part because Jenkins was doing so little against him, that there was no real need to throw as many punches. Fields mixed in quite a few jabs during the bout, something unheard of for him, as he mostly throws wide hooks with both hands. The jabs, however, were thrown incredibly slow, as was Field’s other punches. It didn’t matter, though, because with the sheer volume of punches that Field’s was throwing and landing, he was punishing Jenkins badly.

In the sixth and seventh round, Jenkins had almost completely stopped punching back; Not that he ever was to begin with, but his output dropped to only a few punches during these last two rounds. At that point, it was only a matter of time before the referee Jay Nady stepped in and halted the bout. Thankfully, after the 7th round, Jenkins quit on his stool rather than continuing on and absorbing more needless punishment. Afterwards, Fields mentioned wanting to fight Hasim Rahman next. However, Fields would do better if he were to select a fighter a little less imposing that Rahman, since I have a difficult time seeing Fields winning the fight unless he improves considerably before then.