By Dan Ambrose: Teofimo Lopez Sr says his son Teo will be the undisputed champion at light welterweight by 2023.

‘The Sniper’ Pedraza is no easy mark, and he could wreck things for Teofimo, and force Top Rank to make a tough decision about whether he’s worth keeping.

Losing to Pedraza and George Kambosos Jr would be a signal that Teofimo isn’t the fighter that Top Rank originally thought he was after his upset victory over an injured and much smaller Vasyl Lomachenko in 2020.

With how he fell apart against a very average fighter in George Kambosos Jr last year, it’s hard to imagine Teofimo fulfilling his father’s vision for him.

Many boxing fans have already concluded that Teofimo is a mental basketcase and not cut out for competition at the top rungs of the sport.

Teofimo looked unimpressive in his debut at 140 against Pedro Campa last August. Although Teofimo stopped Campa in the seventh round, it was far from an easy fight for him.

“Everything is beautiful. What better than to come back from a big win against Campa? He put up a good show. He showed everybody what he could do,” said Teofimo Lopez Sr to AB Boxing News about Teofimo’s recent seventh round knockout win over Pedro Campa last August.

“He’s not only a banger but a boxer, and we go to bigger and better things. Right now, we’re just looking forward to moving up and trying to get the best fights.

“We definitely want that Josh Taylor fight right after Pedraza. We’re not overlooking Pedraza. We got to get through him first. A big arena, a big night. I know all the Puerto Ricans are going to come to support him. It’s going to be a great night.

“We all come from the same nationalities. We’re all Latinos, and what better way than to come out here and do it with Pedraza? He comes out and gives it his all, and he takes every challenge.

“We’re going to beat a Pedraza that’s been active, and we’re going to show the whole world entertainment the way it’s supposed to be. Ever since my son was young, I used to tell him, ‘You have to entertain the crowd.’

“We like to see knockouts, and that’s what my son brings to the table. Come December 10th, I want everybody to come. It’s going to be a big night of Latinos, and you know why we all stick together. Let’s make this exciting, man.

“It’s about money. Between me and my son, we don’t look at that. We’re coming out here to become undisputed back-to-back.  Who the hell we got to get through to get that, we’re going to make it happen.

“We made it happen in 16 fights, which I predicted when he was only in seven fights that he was going to be undisputed in his 16th fight when we beat Lomachenko. It happened exactly like I said it.

“The funny thing is, I got my name off that. They call me Nostradamus for a reason. I predict my son is going to be a two-time undisputed champion before the year 2024. If not, 2024.

“It’ll be two-times undisputed world champion at 135 and 140. The most entertaining boxer in boxing right now is Teofimo Lopez,” said Lopez Sr. 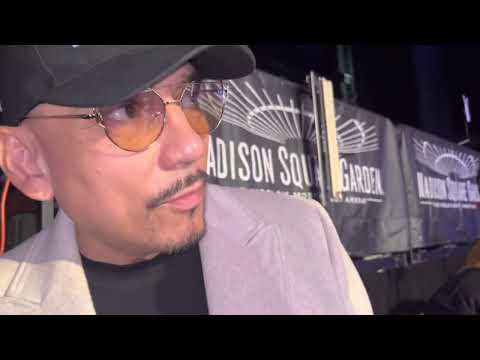 
« Who Were the Best of the Best Heavyweight Champs?