For fans to get a more accurate judgment of whether Haney is the next Mayweather, he’s going to need to beat the opposition a heck of a lot better than Kambosos, Joseph Diaz, and Jorge Linares.

Haney must be tested against fighters like Vasyl Lomachenko, Gervonta Davis, and Shakur Stevenson at 135 if he chooses to stay in the weight class.

I suspect that if Haney stays around the 135-lb division long enough to fight all or some of those fighters, he’ll lose to them, and the fans will stop the silly comparisons to Mayweather.

Beating a lesser fighter twice like Kambosos twice in a row isn’t nearly good enough wins for Haney to be viewed as a Mayweather copy.

The only way you’d compare Haney to Mayweather is if you’d never seen Floyd fight before and you were just basing your opinion on guesswork rather than through observation.

Haney (29-0, 15 KOs) dominated the overmatched Kambosos (20-2, 10 KOs) and showed elements of Mayweather with some of the things that he was doing in the ring.

But if you were to compare Haney to Mayweather, it would be one where Floyd was at the end of his career and not in his prime. Haney doesn’t possess the speed to be viewed as comparable to a prime Mayweather or even when was just starting out at super featherweight.

“Devin Haney looked like an all-around fighter; he’s one of those fighters who reminds me of Floyd Mayweather, where you can’t really devise a game plan against a fighter like him,” said Barak Bess to the DAZN Boxing Show about Devin Haney being similar to Floyd Mayweather Jr.

“He looks like somebody who is incredibly hard to beat. There are no real holes in [Haney’s] game, and he showed that again. He showed he could mix it up a little bit more than he did before.

The judges got it right one more time. He showed he has speed, athleticism, and a brilliant IQ, way above Kambosos. I thought he would turn it up a little bit. He did.”

“Devin Haney isn’t a boring fighter. He’s a good fighter when you force him to fight. He’s not a guy that is going to come to you. He’s going to force you to open him up,” said Paulie Malignaggi on Pauly TV.

“If you’re not able to take it to him, he’s going to make you look like doo-doo, and that’s what he did to Kambosos in the first fight. It’s a style that confused Kambosos completely.

“Kambosos tried to set traps, but that was something he’d never done, and he didn’t look comfortable. He was turning lefty & righty constantly. Haney just sat back and stayed on his lead jab and lead right hand. That’s all he did,” said Malignaggi. 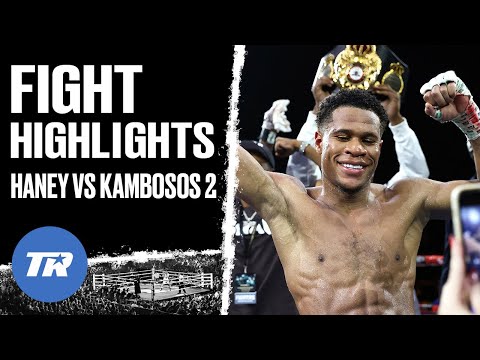 Canelo Alvarez off the hook for Bivol rematch »