By Sam Volz: Canelo Alvarez’s trainer Eddy Reynoso says Gennady Golovkin lacks the “physical attributes” to copy the style of Dmitry Bivol to use it to his advantage in the trilogy fight on September 17th.

Canelo (57-2-2, 39 KOs) will be defending his undisputed super middleweight championship against the 40-year-old Golovkin on DAZN pay-per-view at the T-Mobile Arena in Las Vegas.

So even if Golovkin attempts to follow the blueprint created by Bivol to defeat Canelo, his built-in physical limitations will prevent him from doing so.

Reynoso says the only thing Golovkin can do is fight the way he knows how, which is to focus on throwing to the head, and jabbing.

It would be interesting, though, if Golovkin does attempt to fight like Bivol because he’s had very little success throwing power shots against Canelo in their two fights.

Canelo did an excellent job of using head movement to avoid Golovkin’s single punches, and then counter him with hard shots to make him pay.

What we learned from watching those two fights is the only shots that Golovkin had success with were his jabs, but they didn’t land often enough to impress the judges.

They were more impressed with Canelo’s cleaner-landing punches, which landed with a lot of power.

“He’s motivated to keep going and take that thorn from his side with a winner’s mentality. He’s ready to get back to work,” said Eddy Reynoso to Fight Hub TV about Canelo Alvarez.

“Nah, he doesn’t have the physical qualities,” said Reynoso when asked if Golovkin will try and mimic Bivol’s fighting style against Canelo. “Not as long of a reach as Bivol. His jab isn’t as long, as he doesn’t move like Bivol.

“He’s [Golovkin] going to do what he knows, win his fight with punches to the head and work his jab. That’s what he’s going to do,” said Reynoso.

Golovkin isn’t going to try and follow the blueprint created by Bivol because that would require a lot of stamina. As we saw in Golovkin’s last fight against Ryota Murata last April, he was exhausted after four rounds with the fight following a slow pattern.

“It could be a close fight or a fight with a KO. Both have one-punch power and can take a punch,” said Reynoso. They are both strong & brave, so I can say it will be a complicated fight.

“Yeah, he [Canelo] can KO him, but GGG can also knock him out. So it’s a close fight, a competitive one and hopefully, things go our way.

“After a fight, a lot of things come out,” said Reynoso when asked why Canelo got tired against Dmitry Bivol. “These fights were won in adverse conditions. We’ve fought with a hurt hand, fractured hands punches to the ribs that hurt him in the sixth round, and we’ve ended up winning.

“When fights are lost, a lot of things can come out that contribute to a loss. But there are times when you win in adverse conditions. Take the losses as they are and you keep working, keep grinding and keep having discipline.

“Prepare a lot better, and do things better,” Reynoso said when asked why he believes Canelo can win the rematch with Bivol. “I think we were close to winning the fight. We lost the last two rounds, and that caused us to lose the fight.

“With better preparation and training for Bivol, without a doubt, we will win. Of course, we give advantages,” said Reynoso on whether 175 is too big for Canelo. “On the night of the fight, he [Bivol] had a weight advantage.

“With that, Saul was still competitive and was in the fight. But those are the fights and challenges that give you glory. We got to go for those. We couldn’t in the first performance [against Bivol], but we will try again.

“No words. The words that come from people who in their time were not disciplined, I don’t even listen to. He can say what he wants, but we know what we need to do to continue forward,” Reynoso said.

“Yes, of course. He’s a winner and 100% an athlete. He’s going to keep going, work hard and you’ll see a different Canelo,”  said Reynoso when asked if he was still hungry.

“Well, he got sad like the rest of the team. It’s part of the process of losing,” said Reynoso when asked Canelo how he mentally took his loss to Dmitry Bivol last May.

“You got to keep working. He’s very competitive, he’s a winner, and doesn’t like to lose. But he understands this is part of the sport. Now all he needs and the results will show.

“Well, Oscar [Valdez] just fought and doesn’t have a date. I spoke to him and maybe he fights in November. He’s working in Mexico, and then he’ll come here to San Diego,” said Reynoso when asked if a number of his fighters have stopped training with him recently.

“On Andy Ruiz, the last time I saw him was 15 days ago. He went to the gym, trained, and then I don’t know what happened to him. But he can train where he wants, he’s free.

“Just like when they come and ask for an opportunity for you to train him, and some give him the chance. When they don’t want you to train them, well, they can leave. They’re free, and I wish them well.

“Well look, numbers talk,” said Reynoso when asked if it hurts him to hear fighters like Ryan Garcia say that he wasn’t given time to train when he was at his gym. “All the boxers that left but were with me, they came at one level and left at another level.

“They all had fights with me and they won, won world titles, were ranked, and had great fights and that’s what stays. Numbers talk. I hope they keep winning their fights instead of losing.

“Facts speak. He’s had more than 30 fights, and he’s won. It’s because he’s in the gym,” said Reynoso when asked if Ryan Garcia was dedicated when he was training at his gym. “But people start to talk if he’s disciplined or undisciplined.

“He’s undefeated, won all his fights and that speaks on whether he’s disciplined or not,” said Reynoso about Ryan.

Canelo & Golovkin know each other

“It’s going to be a fight where they are both familiar with each other,” Reynoso said about Canelo and Gennadiy Golovkin. “They both have more anger, and it’s going to be a better fight than the previous two in a weight class [168] where they don’t cut & come stronger physically with more experience.

“Saul is coming off a loss and wants to win again. GGG after losing to Saul hasn’t lost. He’s won. It’s an important fight for both. He’s been maturing, he’s stronger now and his punch will never leave him,” said Reynoso when asked if Golovkin has aged since the last fight with Canelo.

“The trainer change is good for him. His defense is better now, and he uses his jab more. He looks good and is in a good moment now to be fighting Canelo,” said Reynoso. 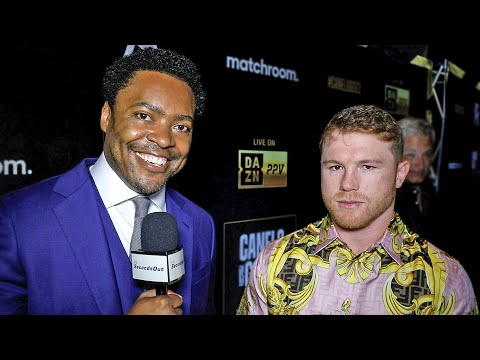