Demetrius Andrade vows to shut Jason Quigley down on Friday

By Sean Jones: WBO middleweight champion Demetrius ‘Boo Boo’ Andrade (30-0, 18 KOs) is confident he’s going to shut down the offense of fringe contender Jason Quigley (19-1, 14 KOs) and easily beat him this Friday, November 19th in their fight on DAZN at the SNHU Arena, Manchester, New Hampshire.

Andrade wanted to fight a better opponent than the 30-year-old Quigley, but this is all his promoters could get for him.

Demetrius has had no luck getting Jermall Charlo, Canelo Alvarez, or Gennadiy Golovkin to step up to the plate to fight him.

Consequently, Andrade has to keep busy fighting Quigley, Liam Williams, Luke Keeler, and Maciej Sulecki while waiting for those guys to look his way eventually.

The Andrade vs. Quigley undercard for this Friday has these two interesting fights:

“That’s a lot of money,” Andrade continued about his attempts at trying to get a fight against Jermall. “Who else other than Canelo are you going to make that kind of money? Maybe GGG, not even.

🗣 “Once people catch on and see what I’m made of, then they’ll see it’s a good fight. I know what it takes to beat somebody!” – @BooBooAndrade#AndradeQuigley pic.twitter.com/A7JQBWspa6

“This is what it takes and to become and to have life-changing situations and for me too. Either one of those guys are going to be able to make more fighting me, and I’m going to make more.

“That’s what we’re in it for. So how many times are we going to go over the same thing saying, ‘Demetrius this, Demetrius that.’ All these excuses because now Canelo says I’m a horrible fighter, and now Charlo wants to say it?

“Why? Because a casual fan doesn’t really know much about me because I’m not the most popular boxer outside of the mainstream? Cool, but once people catch on and see what I’m made of. Now they say, ‘Let’s fight.

“Inside boxing, they always know every style makes a different type of fight. I’m going to bring a different style to the occasion because I know what it takes to beat somebody,” said Andrade.

WBC middleweight champion Jermall Charlo (32-0, 22 KOs) appears to be playing it safe, waiting for Canelo Alvarez to pick him out as he did with Sergey Kovalev and Caleb Plant.

Charlo isn’t going to risk that $10 million+ payday that he can get fighting Canelo against a dangerous fighter like Demetrius Andrade by taking him on in a unification fight. If Jermall is turning down $7 million to fight Andrade, it tells you that he believes he can get far more than that by fighting Canelo or Gennady Golovkin.

Believe me; if Jermall thought he could beat Andrade with 100% certainty, he would have picked him out already instead of fighting the no-name fighters Juan Macias Montiel, Sergiy Derevyanchenko, Dennis Hogan, Brandon Adams, and Matt Korobov in the last three years.

Charlo has been playing it safe, getting easy paychecks fighting on SHOWTIME while waiting for the big Canelo cash-out fight. Demetrius’ name would mean a lot more on Charlo’s resume, but he’s not sure he can beat him. Hence, Andrade is being avoided due to him being too risky for Charlo.

Jermall isn’t going to mess with his revenue stream by fighting Demetrius and potentially losing the fight.

“I think because he was the only one that was willing to step up, and I think he fought in an eliminator against Sugar Shane Mosley Jr.,” said Demetrius Andrade on why he’s fighting Jason Quigley this Friday.

“Also, I don’t have the luxury of picking guys, so whoever is available and willing to fight, we’re going to make the fight happen because I need to stay active.

“As I said, whatever it takes for his confidence to be boost, it’s going to be shutdown come action time. As I said on my Twitter, I beat both of those guys [Quigley and Shane Mosley Jr] with one hand tied behind my back,” said Andrade when asked about his thoughts on Quigley’s performance against Mosley Jr. in his last fight.

“It is what it is. They’re both on the same type of level and a little action fight. When he [Quigley] got in there with Sugar Shane Mosley, I didn’t see about him having any power.

“Where else are these fighters going to go? What much more is out there to keep on fighting other than each other?” said Demetrius Andrade in questioning how much longer he’ll be avoided by the other top fighters at 160 and 168, like Gennadiy Golovkin, Jermall Charlo, and Canelo Alvarez,” said Andrade.

It’s a shame that all Matchroom Boxing promoter Eddie Hearn could muster up as an opponent for Andrade’s fight on November 19th is the limited fighter, Jason Quigley. This guy is arguably a step down from Andrade’s last opponent Liam Williams, who was a ham & egger

Quigley is on the level of past Andrade opponent Luke Keeler and not quite as good as Maciej Sulecki, Artur Akavov, or Walter Kautondokwa. We’re not seeing an improvement in the quality of Andrade’s opponents.

It appears that the level of opposition Andrade is being fed is descending rather than ascending, which is keeping him from becoming a star worldwide.

If Andrade could take Canelo Alvarez, Gennadiy Golovkin, and Jermall Charlo’s scalps in 2022, he’d be a superstar overnight. Unfortunately, those guys will likely avoid Andrade like the plague because they don’t want to lose.

If this were the NFL or NBA, those fighters would be FORCED to face Demetrius because it would be part of the league play.

Teams can’t choose who they want to play against based on the threat level, but in boxing, that’s how it’s done, which is why you get champions like Canelo, who isn’t the best.

It’s careful match-making and smoke & mirrors to create a false image of him being the best. In reality, Canelo would likely lose to Andrade, Golovkin, and David Benavidez.

Andrade is confident of beating Canelo

“Yeah, you can’t sit here and fight the toughest guys back to back to back, but it’s coming to that time. I’m not getting any younger, and I don’t want to do this until I’m 40-years-old. This is not the life that I said at that age,” said Andrade.

“I’m going to continue to try and knock on these doors, and hopefully, the team can put these together with Matchroom and DAZN and make these fights happen and whatever it takes more money.

“There was [Erislandy] Lara, there was Floyd Mayweather, and there was many other fighters that had that type of style that he [Plant] had that gave him [Canelo] problems,” said Andrade.

“Austin Trout, he ended up fighting, but he don’t have that elusive movement, but he’s a southpaw,” Demetrius said in remembering another fighter that Canelo struggled with in the past.

“I have all the confidence in the world to beat anybody out there. That’s something I mentioned earlier. Canelo has the power. So if Canelo says, ‘I want to fight Demetrius at 175,’ I’m going to fight him at 175,” Andrade said.

What we saw of Canelo’s less than impressive performance against IBF super middleweight champion Caleb ‘Sweethands’ Plant on November 6th and in his fight with WBO 168-lb strap-holder Billy Joe Saunders last May showed that he’s slowing down.

Canelo can’t throw punches like he used to, and he’s still puzzled by any movement due to his cement feet. It’s a joke that Canelo has improved since his loss to Floyd Mayweather Jr. in 2013.

Alvarez hasn’t gotten better, and what has changed is the level of opposition that Canelo is facing.

“I haven’t really watched [WBA middleweight champion Ryota] Murata, but I know of GGG [Gennadiy Golovkin], so I don’t really know what’s going to happen,” said Demetrius when asked about his prediction on Golovkin’s 160-lb unification fight with Murata on December 29th in Saitama, Japan.

“It’s a good thing it’s happening because it’s one step closer to unification for the whole division. So, therefore, that’s being done, and one of them will have two belts, which gives me and [Jermall] Charlo the options to fight each other or fight whoever wins out of Murata and GGG.

“Liam Williams will be a different fighter,” said Andrade when asked about his prediction on the Chris Eubank Jr. vs. Liam Williams fight on December 11th.

“I saw softened him [Williams] up, or he might be a little smarter, a little tougher and be able to beat somebody like Chris Eubank because Chris Eubank can’t do what I do or like I said, he may be soft, and Chris Eubank can walk through him. I’m not too sure,” said Andrade

It’s believed that Golovkin, 39, is playing it safe by fighting only guys that present no threat to him while he patiently waits for Canelo to choose to face him in a big-money trilogy fight eventually. Andrade is not a sure thing for Golovkin, particularly with the Kazakh about to turn 40 next April.

As a result, Golovkin will almost surely choose to swerve a fight with the unbeaten Andrade and likely decide to take another safe battle against one of the non-threatening contenders in the 160-lb division. 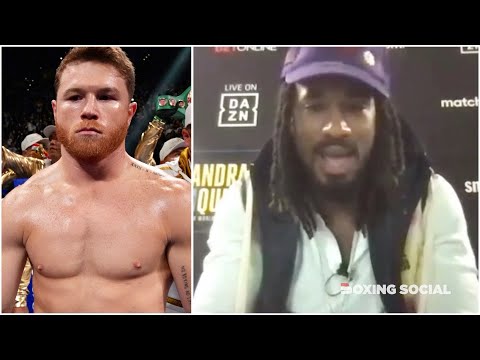 
« Tszyu vs. Inoue: Weigh In Results from Sydney