By Barry Holbrook: Retired former two-division world champion Ricky ‘Hitman’ Hatton is throwing his name into the hat to be one of Oscar De La Hoya’s opponents for his exhibition fights.

De Hoya might like the idea of facing Hatton because his goal is to get a rematch with Floyd Mayweather Jr after two fights.

Hatton would be a better option for De La Hoya than Silva, who looked weak and slow in his recent victory over Julio Cesar Chavez Jr.

At 42, Hatton is still young enough to compete against the former five-division world champion De La Hoya if he can get in shape.

It’s been nine years since Hatton retired from boxing following a disappointing ninth round knockout defeat against Vyacheslav Senchenko in November 2012 in Manchester, England.

One can argue that Hatton never really himself an honest chance of winning the fight by coming off a three-year retirement without a tune-up to face the contender Senchenko.

Hatton had taken off a massive amount of weight to get ready for the Senchenko (37-2, 25 KOs) fight in a hurry.

It was crazy for him to trim off that kind of poundage without taking three or four tune-ups to get him ready for the heavy-handed Ukrainian Senchenko.

Also, Hatton was a much more effective fighter when he was competing in the 140-lb division than he was when he moved up to 147 for his fights with Senchenko and Floyd Mayweather Jr. 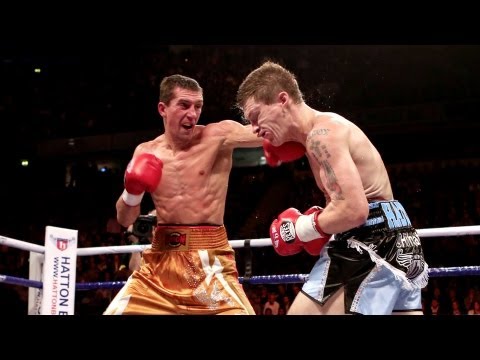 Still, Hatton fought well during the contest and was ahead on all three of the judges’ scorecards going into the ninth round.

Hatton was stopped in the ninth round by a hard left hand to the body from Senchenko. Disappointedly, Hatton announced his retirement during the post-fight press conference.

Still quite young at 33, Hatton had a lot left in the tank if he’d chosen to continue fighting.

Obviously, with the millions that Hatton had made for his fights with Pacquiao, Kostya Tszyu, Floyd Mayweather Jr, and Paulie Malignaggi, it would have been tough for him to keep his motivation going to continue in the sport.

Hatton is still quite wealthy today. According to Celebrity Net Worth, Hatton’s net worth is $40 million.

Before his comeback, Hatton hadn’t fought since getting blown out in two rounds by Manny Pacquiao

“I’ll have a move about with Oscar De La Hoya if the opportunity comes,” said Hatton to Metro in volunteering to fight former five-division world champion De La Hoya.

“Oscar was a hero to a lot of people in boxing so it would be interesting even if it is only an exhibition,” Hatton continued. “To share the ring with him and find out first-hand how good he was and maybe still is.

“It looks like he might be fighting former UFC fighter Vitor Belfort now but there is any number of boxers who would want it if Oscar keeps talking about it,” said Hatton.