By Sean Jones: Jermell Charlo (34-1, 18 KOs) was going back and forth this week with writers about his exclusion in the pound-for-pound lists.

Although Charlo, 31, said he isn’t bothered about being excluded by Ring Magazine and ESPN’s pound-for-pound list, he sure sounded very, very upset about it.

Charlo will have his IBF, WBA & WBC 154-lb titles on the line this month when he takes on WBO champion Brian Castano (17-0-1, 12 KOs) in the main event on July 17th on Showtime at the AT&T Center in San Antonio, Texas.

The winner of that fight will be the undisputed champion at junior middleweight. It’s possible that whoever emerges as the Charlo vs. Castano fight winner will earn a top 10 placement in the pound-for-pound lists.

It’s hard to view Charlo as worthy of a top 10 spot because of his loss to Tony Harrison and his absence of real big-name fighters. His best wins have come against Harrison and then 21-year-old Erickson Lubin.

There are not enough quality names on Jermell’s resume to say that he rates a spot over someone like Vasily Lomachenko, Teofimo Lopez, or Naoya Inoue.

That’s a good list by Ring Magazine for the pound-for-pound top 10. However, I don’t know that I would have Estrada in the top 10, given his highly controversial win over Roman ‘Chocolatito Gonzalez last March.

Too many boxing fans saw that as a robbery, and they totally discredited Estrada’s win.

“I thought it was one list. Why are there all those pound-for-pound lists?” said Jermell Charlo. “I’ve had 35 fights in my career.

“You can choose whichever one you want,” said Charlo when asked if a win over Castano will put him on a pound-for-pound list.

“I’ve been down on the cards and came back with a knockout. I’ve been a guy that has fought some of the toughest guys.

“Y’all have got to remember some of the people I’ve fought and who they fought. It’s okay. I’m not judging them on that. I do get a lot of I’ve been down on the cards and came back with a knockout.

“I don’t care about that. I’m getting ready to get in there and do some dangerous stuff.

“You can boycott me off your list like y’all been, whatever the case is. I don’t care about that,” said Jermell.

Losing to Tony Harrison hurt Jermell’s ability to be included on pound-for-pound lists. That was only four fights ago that Charlo was outboxed by Harrison in a 12 round decision.

“I’m 154 Jermell Charlo, and I stand my ground for who I am,” said Jermell. “As I said, as long as I’m making the people around me happy, my peers and my coaches and the people that are telling me what to do and they’re satisfied with it, and I give my all, lists don’t matter.

“It’s not as if we’re getting extra dollars because y’all made up a list of who is the best and who is not the best.

“I believe Canelo is #1 right now, honestly. But you have Terence Crawford really, really high. Did y’all look at the opponent of who he fought.

It’s hard to question Crawford’s placement in the pound-for-pound lists because he’s captured world titles in three weight classes. When you do something like that, you can overlook his weak resume.

If Jermell was a three-division world champion and still unbeaten, it’s obvious he would be on one or both of the pound-for-pound lists. Unfortunately, Jermell has only won world titles at 154, and his victories have been against beatable opposition.

Charlo values being undisputed at 154

“Well, I’m not getting any younger, and these are goals to accomplish, and these are things that I would love to put my body and my mind to,” said Jermell when asked why is he trying to become the undisputed champion at 154 when a lot of fighters could care less about trying to do that.

“So if I put my body and my mind to it, my heart is going to follow. This is something that I need the most.

“Not necessarily the belts, but some legacy s***. It’s something I could stand strong on to show later in my life to show my kids.

“That I accomplished something that a lot of people doubt you on. People don’t want to see you win.

A lot of people don’t even want to see you at the top of it,” said a bitter-sounding Jermell.

It would be more of an accomplishment for Charlot to unify the 154-lb division if he had to beat someone really talented like Errol Spence Jr, Canelo Alvarez, Terence Crawford, Gennadiy Golovkin, or Demetrius Andrade.

If those fighters fought at 154, likely, Jermell would never get a chance of becoming an undisputed champion because he couldn’t beat them.

“Jermell is a good fighter, but I’m the type of fighter that comes forward and goes after you,” said Brian Castano at the virtual news conference with Charlo this week.

“Even though Charlo said I have nothing he hasn’t seen before, he has never seen anyone with my fighting style.

“So I’m going to try to do my best. This is a fight I’ve been waiting for all my life.

“Charlo is the opponent to beat, and I am here to do my job. That’s the bottom line,” said Castano.

It will be a big shock if WBO 154-lb champion Castano beats Jermell on July 17th because most boxing fans aren’t giving him a chance.

Of course, if Castano does defeat Charlo, that would take care of his gripe at being left off the pound-for-pound lists.

Charlo already got beaten by Tony Harrison in 2018, and a second defeat would pretty much end any argument about whether he deserves a spot in the top 10 on ESPN and Ring Magazine’s pound-for-pound lists.

Castano is the type of pressure fighter Jermell hasn’t seen since his controversial 10 round decision win over Vanes Martirosyan in 2015. Charlo struggled badly from the pressure that Martirosyan put on him in that fight, and he got what many boxing fans felt was a gift decision.

To be sure, Jermell has turned things around since his loss to Harrison, but he hasn’t beaten anyone that you can call a rock-solid fighter. Even in Charlo’s rematch with Harrison, he was having problems.

You hate to say it, but Jermell isn’t a super top 10 pound-for-pound type of fighter. He’s got some speed and power, but he’s vulnerable, just like his brother Jermall. 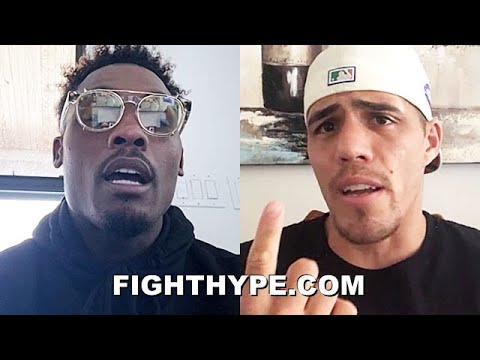 
« Fury vs. Wilder 3 likely to be postponed due to Covid 19 outbreak from Fury’s camp