By Jeff Aronow: Unbeaten top 147-lb contender Vergil Ortiz Jr will be squaring off with former welterweight world title challenger Egidijus ‘Mean Machine Kavaliauskas in the headliner on DAZN next month on August 14th at the Ford Center at The Star in Frisco, Texas.

This fight will show whether Ortiz Jr has the talent to take the next big step in his career to challenge for a world title against WBO welterweight champion Terence Crawford.

The 23-year-old Ortiz Jr will be defending his WBO International 147lb strap, but the belt is inconsequential because it’s not a real-world title. Ortiz wants a crack at WBO 147-lb champion Crawford.

If Ortiz Jr defeats Kavaliauskas, 33, in a better fashion than Crawford did in December 2019, it’ll show that he’s ready to face him. Whether Ortiz Jr will be able to get a title shot against Crawford is something altogether different. 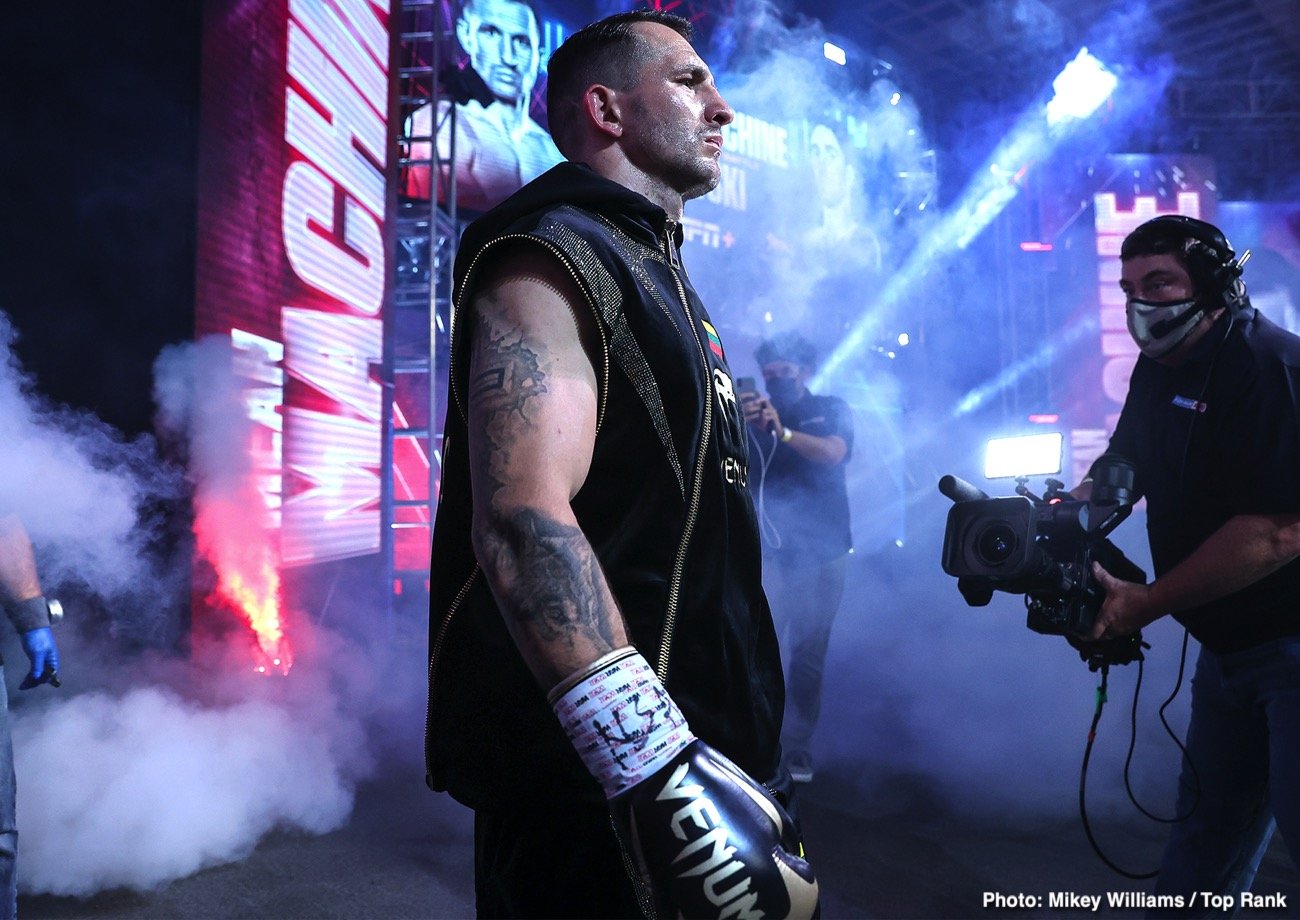 Crawford has already said he’s not interested in fighting Ortiz Jr, so it’ll be up to the World Boxing Organization to order the fight.

The two-time Olympian Kavaliauskas bounced back from his loss to Crawford to defeat Mikael Zewski by an eighth round knockout last September in Las Vegas, Nevada. Kavaliauskas looked outstanding in dropping Zewski (34-2, 23 KOs) twice in the fight in the seventh and eighth.

In terms of punching power, Kavaliauskas is one of the best in the 147-lb division. He’s dangerous, as we saw in his fight with Crawford. He dropped Crawford in the fifth round, but the referee blew the call by saying it was a slip.

The replay showed that Crawford was badly hurt and fell over after getting nailed by a wicked punch. That’s one of many instances where instant replay in boxing could help improve the sport.

Vergil Jr putting his perfect record on the line

“On August 14, Ortiz Jr. will look better than ever and remind everyone why he is the biggest threat at 147 pounds,” said Oscar.

It’s good that Vergil was able to stop Orozco, Solomon, and Hooker, but stopping those guys isn’t a big deal. Those are fighters that many of the top welterweights would likely knock out as well.

It’ll say a lot more about Ortiz Jr if he’s able to accomplish the same feat as Crawford by knocking out Kavaliauskas.

If Vergil can score a faster knockout without getting dropped and absorbing punishment like Crawford was, it would say a lot.

You can argue that Vergil took too much punishment against a guy that he should have been able to walk through in the same way that Jose Ramirez did in July 2019. Ramirez stopped Hooker in six rounds, and he didn’t get beaten up around the face nearly as much as Ortiz Jr did.

Kavaliauskas has the type of power where Vergil Jr cannot afford to get hit as much against him as he did in the Hooker fight. It’s fair to say that if Kavaliauskas lands as often as Hooker did against Vergil Jr, he’ll knock him out.

Golden Boy Promotions honcho De La Hoya needs to make sure that Ortiz Jr is working on moving his head and keeping his guard up for this fight with Kavaliauskas. He can’t let ‘Mean Machine’ put hands-on Ortiz Jr the way Hooker did. 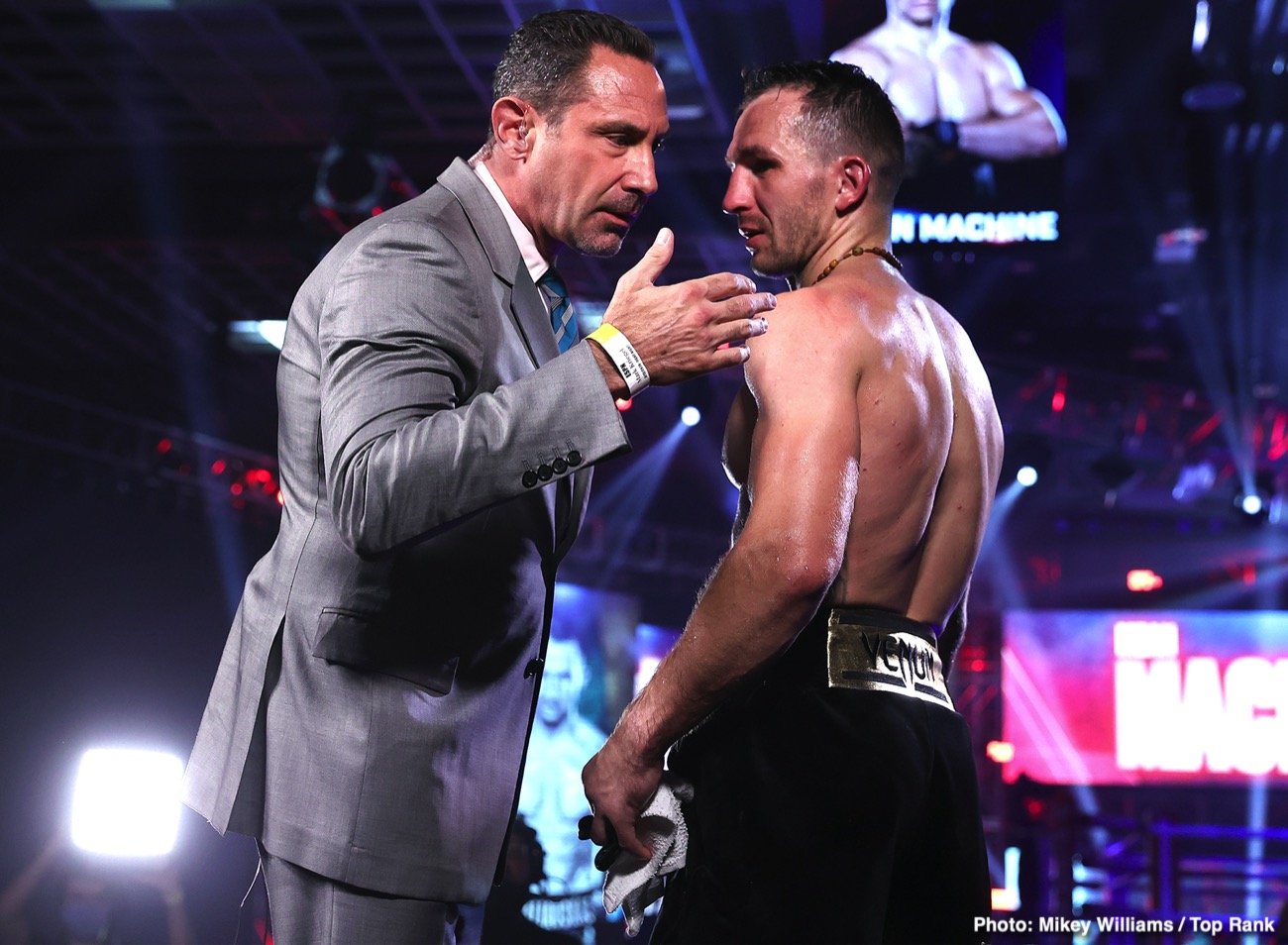 “Egis is a very game, strong opponent, and a win over him would leave no doubts that I’m ready for a world title fight immediately,” said Vergil Ortiz Jr.

You can’t say for sure if Vergil will be ready for a world title fight with Crawford based on beating Egidijus. He’s got to beat him in such a manner that shows that he’s capable of competing with Terence.

If Vergil really struggles in defeating Kavaliauskas, it would be a good idea for Golden Boy to pump the brakes on their idea of putting him in with Crawford.

A new trainer that focuses on teaching defense would be an excellent idea for Ortiz Jr. He’s not shown the improvements on defense that he’s going to need to beat Errol Spence Jr, Crawford, Keith Thurman, Jaron Ennis, or Porter.

“Fans been asking for this fight, and we’re going to give it to them,” said Egidijus Kavaliauskas. “So, mark your calendar and have your popcorn ready. A war is coming.”

Boxing fans haven’t been asking for the Ortiz vs. Kavaliauskas fight. They want to see Vergil face Crawford or Jaron Ennis.

Those are much bigger matches than a fight, better Ortiz and the recently knocked out Kavaliauskas.

If ‘Mean Machine’ was still undefeated, that would be a different story, but he looked bad against Crawford in his controversial 10 round draw against Ray Robinson in 2019.

Eddie Hearn says Fury vs. Wilder 3 would have been a financial disaster »