Vergil Ortiz Jr explains how he would beat Crawford and Spence 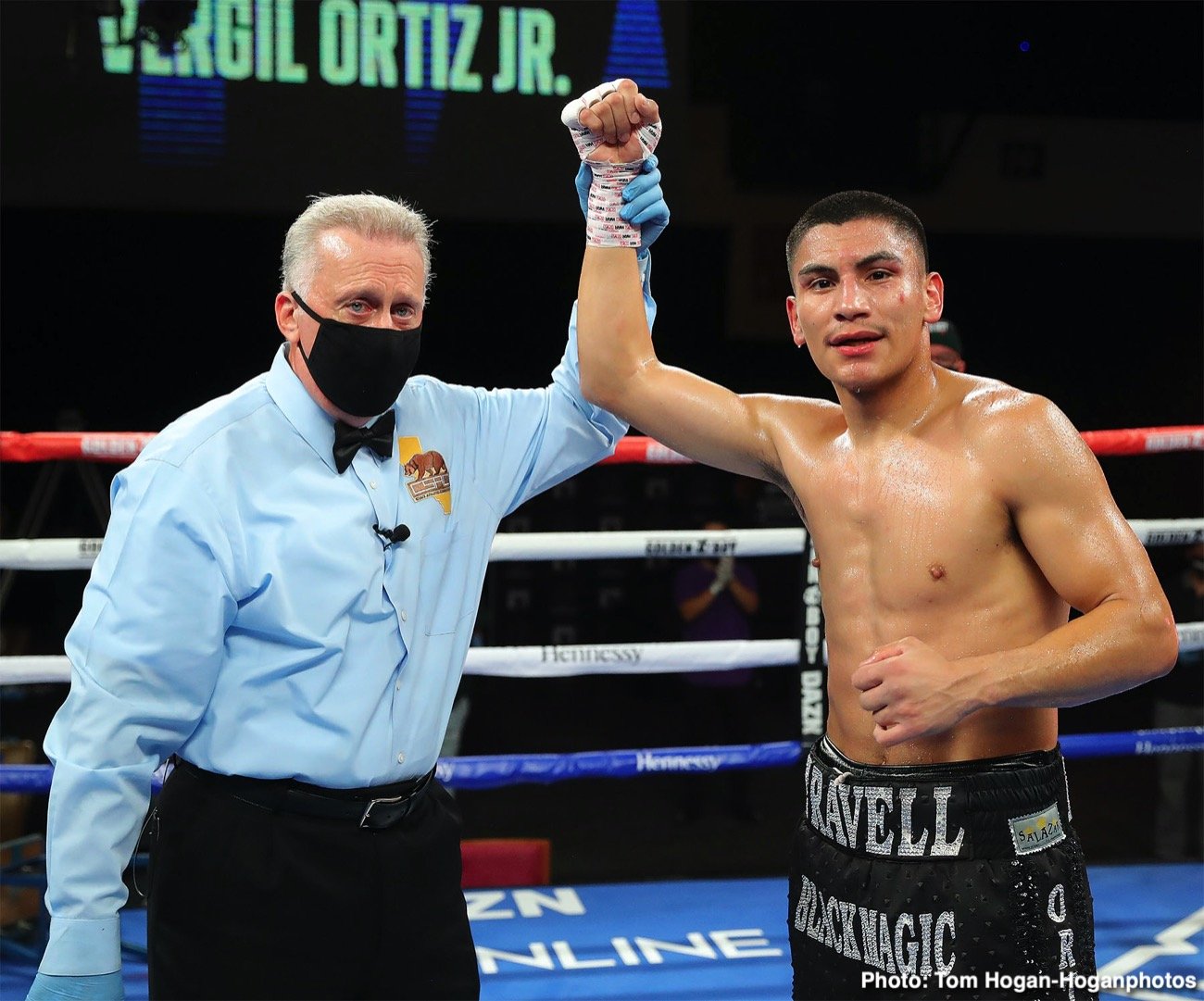 By Sean Jones: Vergil Ortiz Jr says he’s looking forward to fighting Terence Crawford and Errol Spence Jr in the future if the matches are offered to him. If the Golden Boy promoted Ortiz keeps winning, he’s going to get a title shot against one of both of those champions.

The reason Crawford keeps getting mentioned because Vergil is ranked #2 with the World Boxing Organization, and he’s only a small handful of fights away from becoming his mandatory challenger with the WBO.

Once that happens, Crawford and his promoter Bob Arum will have no choice but to face him.

The unbeaten #2 WBO Ortiz (17-0, 17 KOs) plans on fighting both of them in a more cautious manner than we saw in his last fight against Maurice ‘Mighty Mo’ Hooker.

Ortiz didn’t look that great against Hooker, but he says he caught COVID 19 halfway through his training camp for the fight. Also, Ortiz had a shoulder injury that left him 70% for the fight.

The 22-year-old Vergil had been hoping that his seventh-round knockout win over former WBO 140-lb champion Hooker on March 20th would open the doors for him to challenge Crawford (37-0, 28 KOs) for his  WBO welterweight belt, but he’s not interested in this time.

Crawford, 33, let Vergil know after his fight with Hooker that he will need to earn the shot by picking up more experience beating other guys before it can happen.

Vergil grades his performance against Hooker

“All things considered, I did have COVID in the middle of camp,” said Vergil Ortiz Jr to Max on Boxing at ESPN. “Half of the time that I could have used on sparring, I didn’t get to use. I think I did alright; I think I did a solid B+.”

It’s admirable that Ortiz Jr was able to fight as well as he did, given that he was coming off a COVID 19 illness.

Obviously, it was easier for Vergil to bounce back from the flu than it normally is for an older person, but it’s still not good and likely impacted his performance.

“You’re obviously a pressure fighter and a power puncher, and guys like that even if they have fast hands and try to be responsible on defense, getting hit is part of the game,” said Max Kellerman.

“Hooker is not a hard puncher, but your face looked marked up pretty good at the end in a fight you dominated. Did you go back and watch and think, ‘I have to improve the defense?’ Is this just something you have to deal with as a top-level pressure fighter in the pro game?” said Kellerman.

“You see, the marks didn’t necessarily come from the punches hitting my face. The marks came from my gloves rubbing on my face,” said Vergil Ortiz in explaining why his face was so marked up by the end of the Hooker fight in the seventh.

“As you can see, my face is pretty much flawless right now, so I don’t think defense is the problem. To be honest, I didn’t really feel the need to use any defense in this fight. So I just used what I needed to use in this fight,” said Ortiz.

“I understand that and some guys, their face marks up,” said Kellerman in agreeing with Ortiz that his face wasn’t damaged by Hooker’s punches. “When I was watching, I was like, ‘He’s getting hit here and there, but nothing that was really devastating that would cause that kind of redness all over your face.’

“But Maurice Hooker, a very good fighter, as I mentioned, that’s one level.”

It doesn’t matter if Vergil’s face was marked up by Hooker’s punches hitting him directly or his own gloves banging into his face from the impact; the reality is, he was marked up.

Hooker was definitely putting hands on Ortiz Jr, and he did that damage in the six rounds.

It’s fair to say that Vergil needs to buckle down on his defense, especially if he plans on fighting Crawford soon.

Ortiz says he’ll be 110% for Crawford

“If that fight ever happens, just know that I’m going to be mentally sharp, 110%,” said Vergil Ortiz on a fight with Crawford. “I’m going t keep my hands up.

“I’m not going to stay in the pocket for him to hit me, no free shots for him coming at all. And I’m not going to let him time me, and to be honest with you, we’re just going to have to wait and see what happens,” said Vergil.

Ortiz needs to be on the attack against Crawford in the same way that he was in his fights against Hooker and Samuel Vargas. If Ortiz stays on the outside, trying to box Crawford, he’ll get picked apart.

Literally, the only way Vergil can beat a fighter like Crawford is to pressure him like mad, hit him as hard as possible, and try to wear him down.

Crawford is the older fighter, and he’s not used to taking the kind of punishment that Vergil is capable of inflicting on him.

Even if Crawford were young, he’s not had to take the kind of shots that Vergil can hit him with. Crawford is a good fighter, but his ability to take punishment isn’t better than Hooker or Samuel Vargas.

Indeed, if Crawford were hit as hard and as often as Hooker and Vargas were, he would fall apart.

“Look, boxing history is littered with examples of aggressive young fighters that belt on themselves, who don’t want to give up opportunities,” said Kellerman. ”

“If a title shot is presented, they’re going to take it. But when they run into extremely well-rounded champions, Marvin Hagler, the great middleweight champion that passed recently, I’m thinking about his fight with John ‘The Beast’ Mugabi, who, by the way, went on to win a championship after the Hagler fight. Still, he got stopped in the 11th round.

“It was a great fight. But the more experienced, counter-punching, savvier fighter won that fight. What about that in your career right now? You’re extremely aggressive; you’ve never had to worry about what’s coming back at you to the extent that you would against Terence Crawford.

“You’ve mentioned it before, but I would like to hear it live on this show. Would you take a Crawford fight right now, yes or no?”

“I definitely would, yes,” said Vergil about him taking a Crawford fight if it were offered to him right now. “That being said, like you said, in other fights I’ve been really aggressive;

“I know against Crawford; I can’t go in there throwing stupid punches. I definitely fight every fighter differently, I have a different mindset, and I know what I have to do differently. With Crawford, I know I’m going to have to bring my A-game,” said Ortiz Jr.

Vergil would have to take the fight with Crawford if he were given the opportunity because who knows how long it would take before he was offered a second chance.

Crawford is getting up there in age at 33, so Ortiz Jr must take the fight against him when he gets the chance. If Vergil doesn’t fight Crawford soon, he won’t get credit if he beats him.

Boxing fans will forever say that Crawford was an old man, and that would have won if he wasn’t in his mid-30s.

“By the way, the fans always know when Vergil Ortiz is fighting, it’s on,” said Kellerman. “The ding-ding, Vergil Ortiz, is coming to get you.

“I mentioned Terence Crawford. You’re with Golden Boy, and Golden Boy is aligned with DAZN for the most part. Here at ESPN, there’s Top Rank. PBC is on FOX and Showtime.

“So I mentioned a Top Rank guy in Terence Crawford. Many of these welterweight fights aren’t happening because the PBC guys are pretending Terence Crawford doesn’t exist, and in turn, he’s kind of given it up.

“However, Golden Boy has tried to work with different promoters to make matches. Errol Spence is with the PBC. He’s the other top welterweight. What are your thoughts on a Spence fight if that can be made?”

“That’s basically my dream fight right there,” said Vergil Ortiz Jr on a fight between him and Spence. “Me and Spence grew up in the same gym.

“We were training in the same gym, maybe before 2010. That’s a fight that I would like to happen at the Cowboy’s Stadium. That fight has to happen,” said Ortiz.

“What do you think about that fight? How do you approach Errol Spence?” said Kellerman. “You mentioned how you would approach Crawford with a little more defensive responsibility, not staying in the pocket. You have to respect what’s coming back.

“Spence is a very tall order. He’s rangy, he’s a southpaw, and he not only has excellent boxing skills and can play defense when he wants, but he also has real welterweight punching power, and in addition, he’s a very busy fighter. How do you beat Errol Spence?

“I think we’re tailor-made for each other,” said Ortiz Jr about him and Spence. “We have the same foundation, and if the fight ever happened, it would be a very competitive, aggressive on both sides fight.

“The way I fight, I like to establish dominance on the inside and the outside, and I feel like that’s what would happen in that fight. We would both try to be the best at everything,” said Vergil.

IBF/WBC welterweight champion Errol Spence (27-0, 21 KOs) might be an easier fight to get made for Vergil because he’s not going to say that he needs to earn the shot. Spence will make the fight just because that’s what the fans want.

“When I look at 147 pounds, the other prospect I’m very interested in is Boots Ennis out of Philadelphia,” said Kellerman. “What do you think of Boots and where He is in his career now?”

“He’s a great fighter, and there’s no doubt about that,” said Vergil about Jaron ‘Boots’ Ennis.

“You can’t say anything bad about him. He’s fighting Sergey Lipinets, and that’s a very tough test. I would definitely like that fight down the line,” Ortiz Jr said.

“Down the line, you definitely see that,” said Kellerman in a fight between Vergil and Ennis.

“I always ask that about fighters that have a chance of being special because super fights can’t be promoted into existence.

“When the dust settles, two dudes are left standing. I’m not saying you’re going to get there, or Boots will get there; we’ll see.

“But you two are the best up-and-coming 147-pounders, certainly among the very best. Are you saying now that you see him among the young guns that when the dust settles will be waiting for you?”

“Only time will tell, but he definitely has the skillset, he has the hunger, and we’ll just have to wait and see,” said Vergil about him and Jaron Ennis. “But yeah, I hope so.”

We probably won’t see a fight between Ortiz Jr and Ennis for a while because it’s not a good idea for them to face each other as contenders. Once one of them wins a world title, it makes sense at that point.