The Krusher Vs. The Bully: Sergey Kovalev To Face Bektemir Melikuziev on Jan. 30 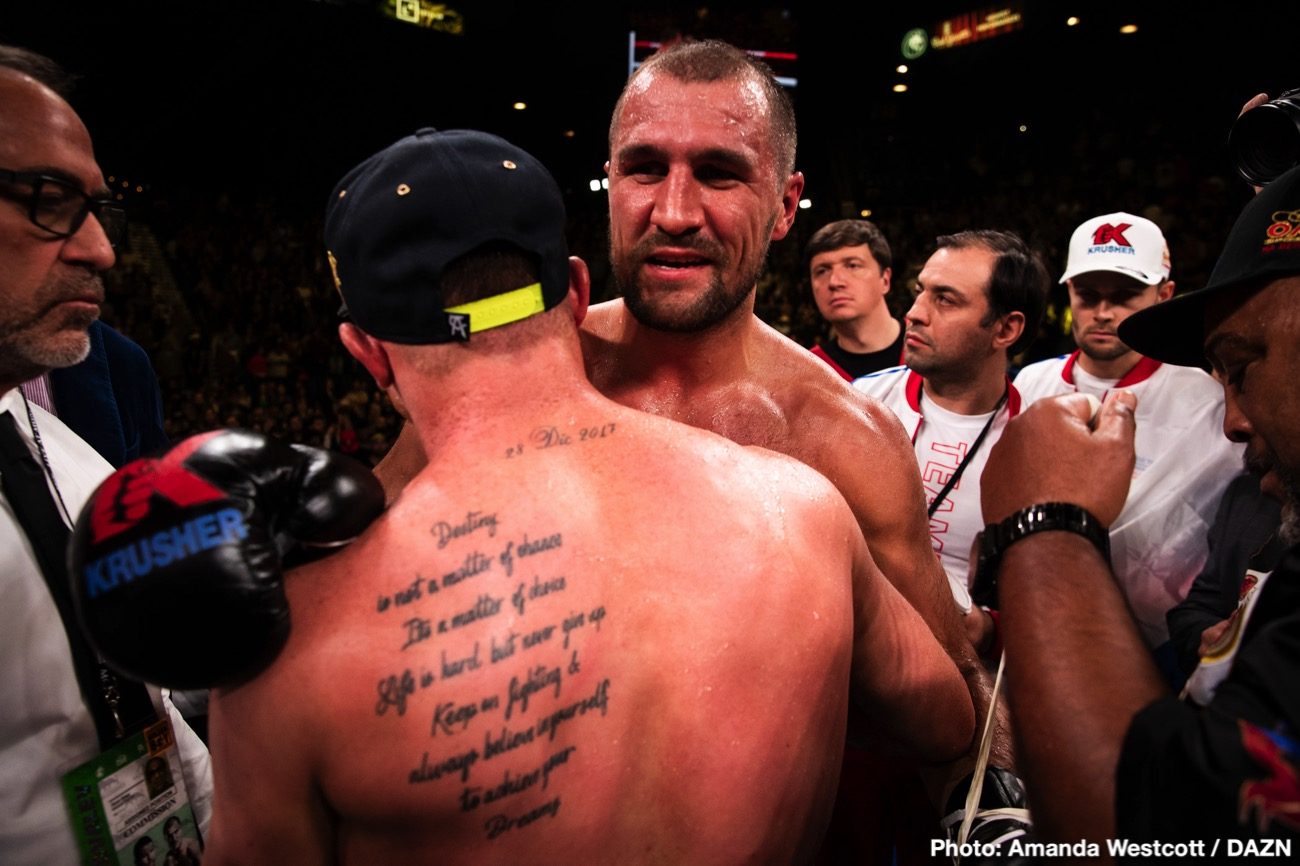 Sergey “Krusher” Kovalev (34-3-1, 29 KOs), the former light heavyweight champion the world and one of the most dangerous punchers in recent years, will return against fast-rising knockout artist and Olympic Silver medalist Bektemir “Bully” Melikuziev (6-0, 5 KOs) in a 178-pound catchweight battle scheduled for 12 rounds. The event will take place Saturday, Jan. 30 and will be streamed live exclusively on DAZN in more than 200 countries and territories, including the U.S., Russia and Uzbekistan.

Information regarding the venue, which is scheduled to be in Russia, will be announced shortly.

“After just six professional fights, Bekt is making an enormous leap to jump two divisions and fight a former unified world champion on his own home turf in Russia,” said Oscar De La Hoya, Chairman and CEO of Golden Boy. “This is the very definition of ‘daring to be great,’ and we have all the confidence in the world that ‘The Bully’ will take out Kovalev and become a world champion in quick fashion.”

Kovalev is a three-time light heavyweight champion who captured his first world title in 2013 when he stopped Nathan Cleverly in Wales. Kovalev then traveled to Atlantic City to meet future Hall of Famer Bernard “The Alien” Hopkins to unify the WBO, WBA and IBF titles with a lopsided unanimous decision victory in 2014. As unified champion, “Krusher” successfully defended his titles twice against Jean Pascal and once against Isaac Chilemba. Despite setbacks against Andre “S.O.G.” Ward and Eleider Alvarez, the 37-year-old Russian managed to avenge a loss to Alvarez and score a technical knockout victory against undefeated contender Anthony Yarde. Kovalev will return after his historic 2019 battle against Canelo Alvarez.

“I am glad that after a long break I am starting my journey back to the title of world champion,” said Sergey Kovalev. “The fact that this fight is scheduled to be in Russia gives me even more motivation and strength. I want to please my fellow countrymen again with my boxing and a beautiful victory.”

“We’re happy to be back after this unexpectedly long pandemic layoff and so grateful to DAZN for the opportunity,” said Kathy Duva, CEO of Main Events. “I’m looking forward to once again seeing Sergey light up when he fights in front of his countrymen as they always seem to bring out the best in him.”

Melikuziev is a 24-year-old puncher with an impressive amateur resume, having captured silver medals at the 2015 AIBA World Boxing Championships and the 2016 Summer Olympics, among other accolades. The native of Shoimbek, Uzbekistan signed with Golden Boy in 2019 and made it very clear that he wanted to move up the rankings as quickly as possible. He kept his promise by scoring four impressive wins in 2019 and two additional knockout wins in 2020. Melikuziev feels he is more than ready for this challenge.

“Sergey Kovalev is one of the biggest boxing stars of the last decade,” said Bektemir Melikuziev. “This is exactly the type of opportunity I have wanted since turning professional and I will be very well prepared for victory on January 30!”

Kovalev vs. Melikuziev is a 12-round catchweight battle presented by Golden Boy, Main Events, Krusher Promotionsand World of Boxing. The fight will take place Saturday, Jan. 30 will be streamed live exclusively on DAZN in more than 200 countries and territories, including the U.S., Russia and Uzbekistan