Katie Taylor vs Amanda Serrano Official – May 2 at Manchester Arena 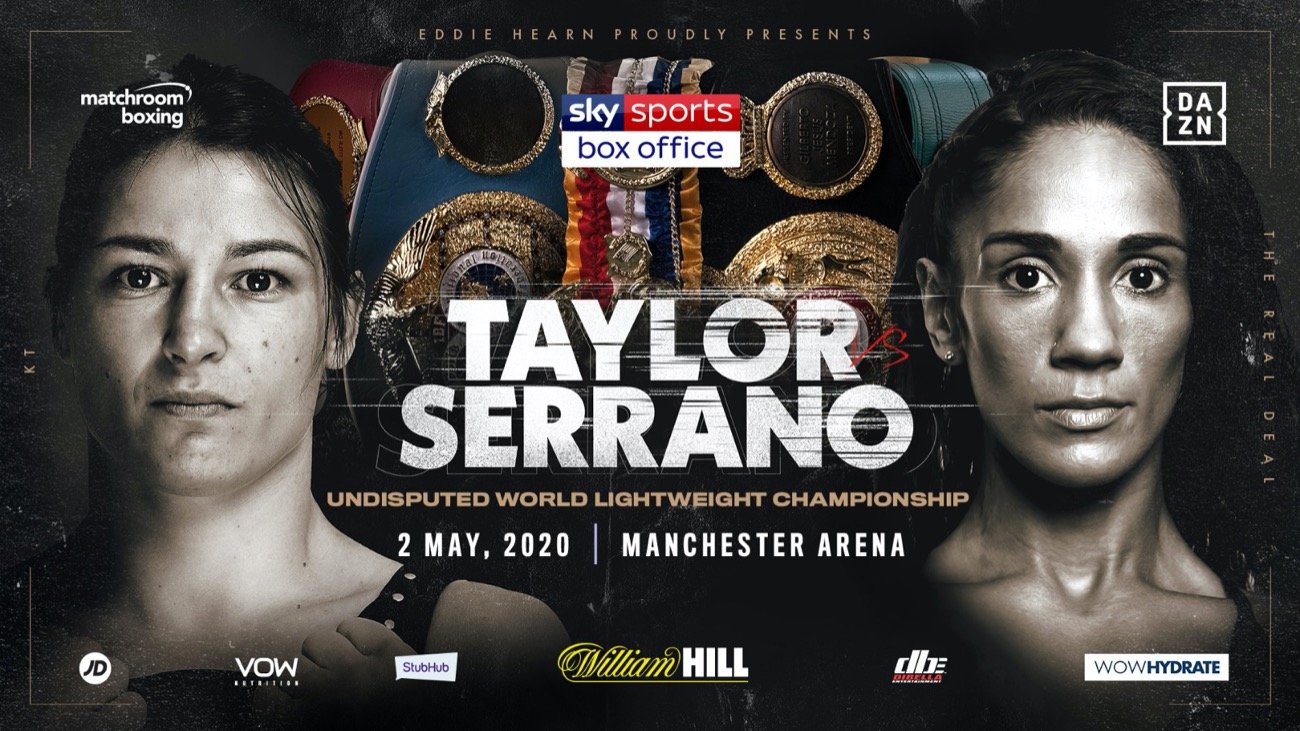 Katie Taylor and Amanda Serrano will collide in a blockbuster super fight at Manchester Arena on May 2 as the Irish legend puts her Lightweight World Titles on the line against Puerto Rico’s seven-weight World Champion, live on Sky Sports Box Office.

Two-weight World Champion Taylor can strengthen her status as one of the sport’s finest fighters against Serrano on the same night as Dillian Whyte risks his World Title ambitions in a huge Heavyweight encounter with the fearsome Alexander Povetkin.

Taylor (15-0, 6 KOs) sealed a dominant points win over Christina Linardatou to claim the WBO Super-Lightweight title at the same venue in November as she stepped up a division after becoming the Undisputed Lightweight ruler against Delfine Persoon in New York.

Serrano (38-1-1, 28 KOs) enhanced her reputation for thrilling fights with an action-packed points win over Heather Hardy at Madison Square Garden in September, while she sharpened her skills for Taylor in a stoppage win over Simone Aparacida Da Silva in Miami in January.

“It’s a fight that seems to have been talked about for years so I’m just glad it’s finally on,” said Taylor. “It’s a massive fight and one that I have been looking forward to for a long, long time.

“I’ve been working hard in training camp in the US since the start of the year so it’s great to have a date to focus on now and I can’t wait for May 2nd.”

“I’m happy we finally got this big fight made because both myself & Katie deserve to be in this position,” said Serrano. “While our fight could have been a main event, I’m still grateful it’s happening. I’m not going to talk down to Katie, as I know she won’t to me, so I’ll leave it at this: one thing that’s for sure is that we’ll both leave it all in the ring. Thanks to my Promoter Lou DiBella, Eddie Hearn, Matchroom Boxing, DAZN & Katie Taylor for this great opportunity. See you in Manchester!”

NEWS:   Makabu vs Mchunu & Trevor Bryan vs Guidry On January 29th in Ohio

“Katie Taylor versus Amanda Serrano for the Undisputed Lightweight Championship of the World – this is the biggest women’s fight of all time,” said Eddie Hearn. “The whole of Ireland and Puerto Rico are going to be watching this absolute war between the Undisputed champion and the seven weight division champion – it doesn’t get any bigger!”

“I’m proud to co-promote this historic fight with Matchroom, and to have it featured on a massive card in Manchester,” said Lou DiBella. “Two of the best female fighters in the world, two of the best of all time, will square up for boxing supremacy. Amanda didn’t shy away from moving back up in weight or from the fight being in the UK; she embraced the idea of winning on the road and cementing international stardom. Taylor vs. Serrano isn’t only the best of women’s boxing, it’s the best of what boxing is supposed to be.”

Tickets are on sale to Fight Pass members NOW via StubHb (www.stubhub.co.uk) and Matchroom Boxing


« Kownacki could get Andy Ruiz fight if victorious against Helenius

Top Rank to fly Naoya Inoue to U.S next week for April fight »