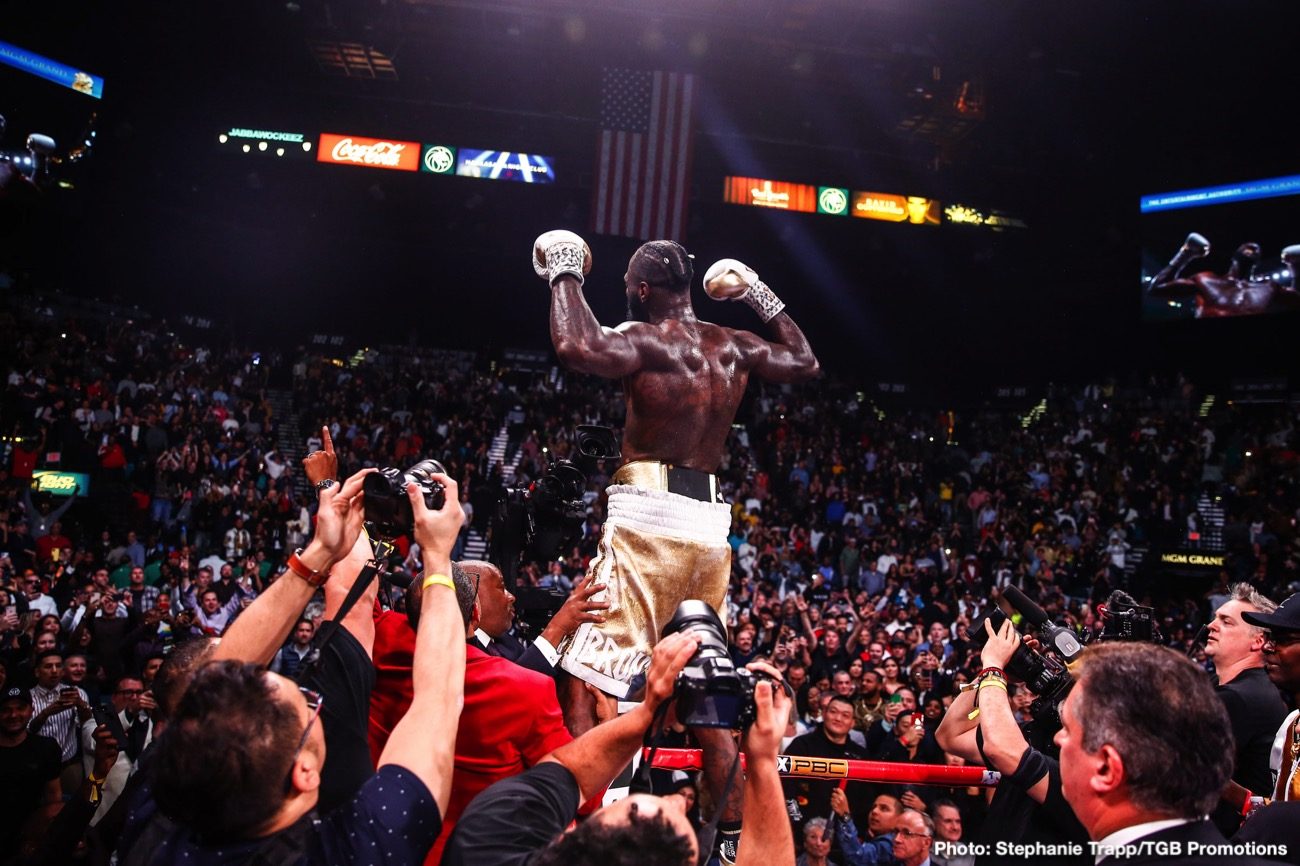 By Mark Eisner: Deontay Wilder has improved more with his game than Tyson Fury has, says trainer Teddy Atlas. He says he noticed the improvements to Wilder’s delivery system for his right hand two fights ago when he fought Dominic Breazeale. Atlas feels that Wilder (42-0-1, 41 KOs) is a better fighter now the one that fought Fury (29-0-1, 20 KOs) two years ago in 2018, and barely escaped with a 12 round draw.

Atlas doesn’t see the same improvements in Fury’s game. In fact, he hasn’t seen any changes whatsoever in Fury since his fight with Wilder. Although Fury has lost a little bit of fat, and put on more muscle, he’s still the same fighter from before.

WBC heavyweight champion Wilder and lineal champ Fury will be fighting each other in 8 days from now on February 22 at the MGM Grand in Las Vegas, Nevada. The fight will be televised on ESPN PPV and Fox Sports PPV in the U.S, and BT Sport Box Office in the UK.

“I’m going with Wilder. A lot of people are going with Fury,” said Atlas on THE FIGHT with Teddy Atlas. “Maybe it’s their feelings, they want to see the underdog or they like his story. He’s got a great story,” said Atlas about Fury. “Wilder has got a good story too.

“He’s been taking care of his daughter who has some problems. But I’m going with Wilder, not just because of the right hand. I’m going with him because he does have the chance where he finally did land it late in the [first] fight.

“He can pick up where he left off. And he finally figured it out a little bit, but there’s another reason. I haven’t seen a real change in Fury. You made a good point that he switched trainers a couple of times already. He’s going to be what he’s going to be. I did see him get gritty in his second fight on ESPN [against Otto Wallin]. He overcame a cut, and he just went after.

“He showed a different dimension instead of that cutey dimension, you know? So, he showed that, but I don’t think he can do that [against Wilder]. That might be a little bit suicidal, but he’s got to be a little bit of a cutey, he’s got to be the smart guy, and the peanut butter and jelly sandwich in this fight,” said Atlas on Fury.

Atlas doubts that Fury will try and mix it up with him the way he did against Otto Wallin. That was a different type of Fury than what we’re used to seeing, but he had a non-puncher in with him.

Wilder’s right hand seems to be a lot more dangerous in his last two fights than ever before. He’s throwing it straighter now, and mixing it up better.

“I feel like Wilder has added something. He’s added a delivery system that I picked up on it two fights ago, where he mesmerizes you with the jab, and then BOP, the right hand is right behind it,” said Atlas.”And it’s not like boom boom.

“Now it’s [jab followed by right hand]. George Foreman did it, Teofilo Stevenson did it,” said Atlas about Wilder. “As I said earlier, the great [Cuban] Olympian. They all did it. I think they lie to you. They make you think you’re safe, because they’re only throwing the jab three-quarters, so you’re safe.

“So you think that’s the end of the line for danger, you know what I mean?” said Atlas. “But it’s not. It’s about three inches further, because they didn’t extend the jab. And Wilder has learned how to do that by making you think you’re safe by standing in front of you. And you cooperate a little, and then BOOM.

“You don’t realize it’s right on top of you, and you don’t have time to register in your brain, and the lights are out and snoring and stuff. So he’s got that going in the second fight,” said Atlas about Wilder’s new delivery system for his right hand.

Atlas likes the way Wilder throws his jab tentatively the way two-time Olympic gold medalist Teofimo Stevenson used to do. Stevenson wouldn’t put a lot on his jabs, but then he would come over the top occasionally with a tremendous right hand to knockout his opponents.

“The other reason I’m picking Wilder is part of me thinks Fury can’t be any better than he was the first time, emotionally, mentally and technically,” said Atlas.

“He [Fury] fought the best fight he could fight. I know people are going to say, ‘Teddy, he can avoid that right, and it’s a better fight.’ Yeah, I got you, but he fought about as good as he can fight, and he handled the pressure.

“He did everything really good, and he still got caught twice,” Atlas said about Fury getting knocked down twice by Wilder. “So again, when I handicap a fight, I try and do it from all dimensions and angles that I think you should, and I’m trying to give that to them. I think that pretty much sums it up for me.

“A. I think Wilder is the one guy that is bringing something new with the delivery system, and I think that it’s going to be who makes the adjustments,” said Atlas. “I feel like Fury to a certain extent, and I know I’ll get push back on this, I don’t know if he thinks he can get better. It is a mental game. He fought so good, almost perfect, and he still got caught twice.

“I don’t know that he can mentally go into the fight thinking he can do better than that, and that means something,” said Atlas on Fury. “Again, it has nothing to do with favoritism. It has to do with pure logic in my mind, and I’m going with Wilder by a 9th round knockout,” said Atlas.

Fury is with a new trainer Sugar Hill Steward, so it’s quite possible he’s unveil a different fighting style for the rematch. Steward is working on Fury’s power game.