By Allan Fox: Adrien ‘The Problem’ Broner says if Eddie Hearn wants him to fight Devin Haney, he’ll need to come up with the $20 million that he’s asking for to take that fight. Other than that, Broner (33-4-1, 24 KOs) says he’s happy in retirement and making millions without fighting. If Hearn wants Broner to take the fight with Haney, he’s going to need to come up with the dough he’s asking for.

The former four-division world champion Broner says, “I’m loaded”, in letting the media know that he’s not hurting for money. Broner feels that if he comes back for the fight against the smaller, younger fighter Haney, he won’t get credit for beating him because he’s bigger and more experienced. Haney is only 21-years-old, so it would be a no-win situation for Adrien.

Broner says he can make 135 easy

“I make weight easy,” said Adrien Broner. “He ain’t got to do that. He’s a youngster trying to come up, it’s cool,’ said Broner about Devin Haney. “We’re both going to come out of retirement and make a mega-fight,” said Broner in talking about him and Tim Bradley.

“I think Mikey beats him [Jessie Vargas], but I don’t it’s not going to be an easy fight, but I think Mikey wins. I make weight easy. This is me being honest. What do I get out of that?” said Broner about him fighting Haney. “They’ll be like, ‘Ah, he was supposed to do that [beat Haney.  He’s the bigger guy, the stronger guy, he’s more experienced.’ Or I have everything to lose if I lost to Devin Haney.

“Give me 20 [million], and I’ll take it. Hell no. For what?” said Broner when asked if he’s interested in taking the deal offered by Haney’s promoter Eddie Hearn. “I’m loaded. A bake potato ain’t got s— on me, man. We [Hearn] talked a couple of times, but it wasn’t nothing serious.

Hearn won’t be able to meet Broner’s asking price because Haney isn’t a star yet. Even if Hearn put the Broner vs. Haney fight on Sky Box Office pay-per-view, it likely wouldn’t sell. Broner, 31, hasn’t fought in over a years since losing to Manny Pacquiao by a 12 round decision in January 2019. The fans will quickly forget about Adrien if he stays out of the ring for much.

Broner to the media: Keep me relevant

“Canelo,” said Broner when asked who’s the #1 pound for pound fighter. “Look what he’s doing. He’s killing the game right now. The way my life is going right now. I’m making millions without boxing. “Devin ain’t doing nothing wrong. There’s a lot of fights out there for Devin.

“He’s actually in a weight class where he can go up or go down. Mikey’s got a fight ahead of him right now, but if Mikey wins, they can make it happen. He did what he had to do. He had a man in front of him, and he got him out of there,” said Broner about Ryan Garcia.

“You have to be more than just a good boxer to be a superstar. Everything I do and done outside of the ring, they may say it hurts, but all of it’s helped my celebrity inside and outside of boxing.

“If I had the chance to do it again, I’d do it the same. He’d come back and beat a lot of these guys. Love me or hate me, I know a lot of you writing a lot of bull-s— about me. That’s cool. Just keep me relevant,” said Broner.

It would be easier to keep Broner relevant if he at least fought once a year, but he’s not doing that. He hasn’t beaten a big name ever, and he’s now becoming more known for what he’s doing outside of the ring rather than inside it. 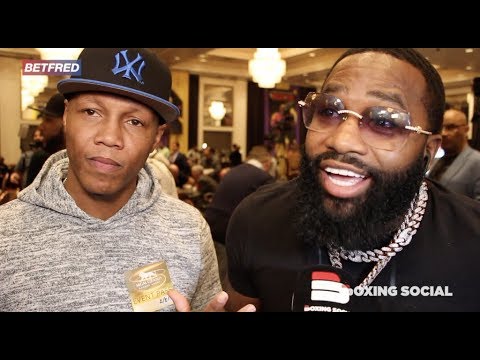 Wilder – Fury 2: How And Where To Live Stream The Fight In Parts Of Europe »