Canelo states that trainer Reynoso will pick next opponent 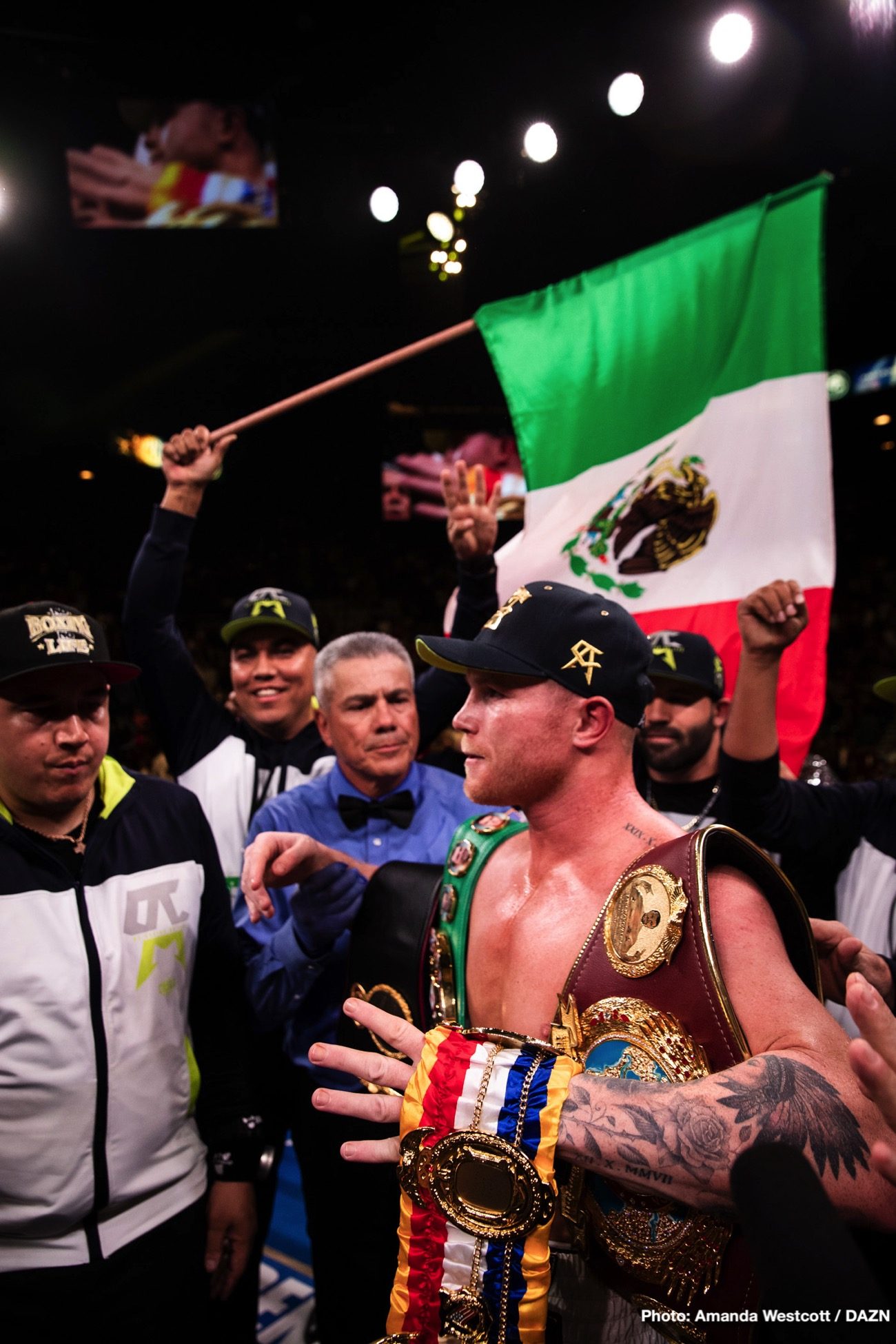 By Allan Fox: Saul Canelo Alvarez (53-1-2, 36 KOs) was undecided which direction he’ll go in for his next fight after defeating WBO light heavyweight champion Sergey ‘Krusher’ Kovalev (34-4-1, 29 KOs) by an eleventh round knockout last Saturday night to become a four division world champion. Canelo says his trainer Eddy Reynoso will be the one who decides his next opponent. In a way, it’s a brilliant move by Canelo to have Reynoso as the one that picks his next opponent. That way if Reynoso selects another old guy for him to fight, Canelo can deflect criticism by saying, ‘I didn’t make the choice. It wasn’t me.’

With Reynoso calling the shots for Canelo’s next fight, that pretty much rules out him fighting Artur Beterbiev, Dmitry Bivol or Callum Smith. Those are guys that would have a real shot at beating Canelo. They’re not old, and they have a history of being knocked out. They wouldn’t coming into a fight against Canelo with a 4-3 record in their last 7 fights like Kovalev did last night.

Reynoso is the one that selected 36-year-old Kovalev for him Given that pick, Canelo’s next opponent will likely be someone fragile, old and or some way beatable. Reynoso’s recent comments this past week that Kovalev is better than any of the other light heavyweight champions strongly suggests that Canelo’s next fight WON’T be in the 175-lb weight class. Why would Canelo stay at light heavyweight if he and/or his trainer Reynoso believe they just beat the best fighter in the division in Kovalev?

Canelo leaving it up to Reynoso to decide next opponent

Obviously, I want to continue to make history, and now I’ve got to see what [trainer] Eddy [Reynoso] is going to come up with, but we are ready for anything,” said Canelo at the post-fight news conference. “Yes, it’ll probably be very difficult to lose weight. It’s always been very difficult for me to lose weight, but I must continue to create history, and I’ll do it. it was hard to get to his body, and it was unpredictable,” said Canelo.

Reynoso is basking in the temporary glory right now for having hand-picked Kovalev for Canelo to beat to scoop up his 4th division world title. The wily trainer isn’t likely going to want to wreck that adulation he’s getting by matching Canelo against a champion that could potentially beat him like Artur Beterbiev, Dmitry Bivol, Callum Smith or Billy Joe Saunders. The predictable thing about the champions that Canelo is being matched against now is the they’re ALL vulnerable due to age or lack of talent. In other words, Canelo isn’t fighting the best champion in the weight classes that he’s capturing belts for the first time.

Will Canelo move up to cruiserweight to go after a title?

Canelo mentioned wanting to continue to make history for his next fight, and the only way he does that if he moves up to cruiserweight to go after one of the titles. This is obviously the best time for Canelo to make the jump up in weight to the 200-lb weight class, as he’s already put weight on. The World Boxing Council cruiserweight title is vacant, and the #1 contender for that belt is Ilunga Makabu.

That’s a guy that Canelo would have a VERY good chance in beating. Makabu looked horrible in getting stopped in the 3rd round by Tony Bellew in 2016. If the idea is for Canelo to just win a world title at cruiserweight so he can add to his resume, then it doesn’t matter if he faces the badly flawed Makabu. The boxing public wouldn’t want to see Canelo fight Makabu for a belt at cruiserweight, as there are far better fighters than him in that division.

Canelo would likely be too small and weak to beat IBF champion Yuniel Dorticos or WBO champion Mairis Briedis. Given that Canelo was willing to fight Kovalev and Rocky Fielding for belts at 168 and 175, it’s quite possible he would have no qualms at facing Makabu at cruiserweight.

The major criticism about Canelo is he’s an opportunist. Instead of facing the best champions, Canelo has conistently picked the beatable guys to win his division titles.

These are the division titles Canelo has won during his career:

Kovalev is old, shot, and arguably not even the second best champion at 175. Canelo won his third division world title last December in beating WBA ‘regular’ super middleweight champion Rocky Fielding. Again, that was another weak champion, and he was considered the poorest of the belt holders at the time at 168.

Canelo won his title at 154 against a welterweight in Matthew Hatton at a CATCHWEIGHT. A lot of boxing fans aren’t aware of that. At middleweight, Canelo beat 35-year-old Miguel Cotto to become a two division world champion. Cotto was the weakest link among the champions at 160 at the time, which included a younger Golovkin.

Canelo has few options at 160

If Canelo moves back down to 160, his options slim in terms of opponents that the boxing public wants to see him fight. Canelo has shown no interest in facing WBO middleweight champion Demetrius Andrade, and the other champions Ryota Murata and Jermall Charlo aren’t likely feasible options for him. Canelo did mention a third fight with IBF middleweight champion Gennadiy Golovkin, but he said it had to make “business” sense.

Once again, Canelo said the 37-year-old Golovkin isn’t a challenge for him. Who can blame Canelo for not wanting to fight Golovkin again, especially after the way GGG looked in his last fight against Sergiy Derevyanchenko.

The way Canelo talked about the prospects of fighting GGG again, he doesn’t sound motivated to take that fight. Golovkin is Canelo’s only appealing fight at 160, but if he doesn’t want to take it, then he’ll have to look at 168.

These are Canelo’s options at 168:

There are other champions at super middleweight that Canelo could fight, but he probably won’t. They would be tough outs, and they fight on a different network. We’re talking WBC champ David Benavidez and IBF champ Caleb Plant. Both would be difficult fights for Canelo, and it might not be worth it for him to make those matches due to the lack of interest from fans. With those guys fighting on different networks, that rules out almost entirely the possibility of Canelo fighting them.

“I am very happy with the results. I’m a four division world title holder now,” said Canelo at the post-fight news conference after beating Kovalev. “It was a harder fight than we thought. He’s obviously a much larger fighter, and I did feel him hitting me, and I was able to deal with. Yes, but that’s what worked, perseverance,” said Canelo when asked if he was frustrated at all the missing he was doing. “I don’t care if I’m pound-for-pound. What I care about is coming here and making history, and to show people who I am.”