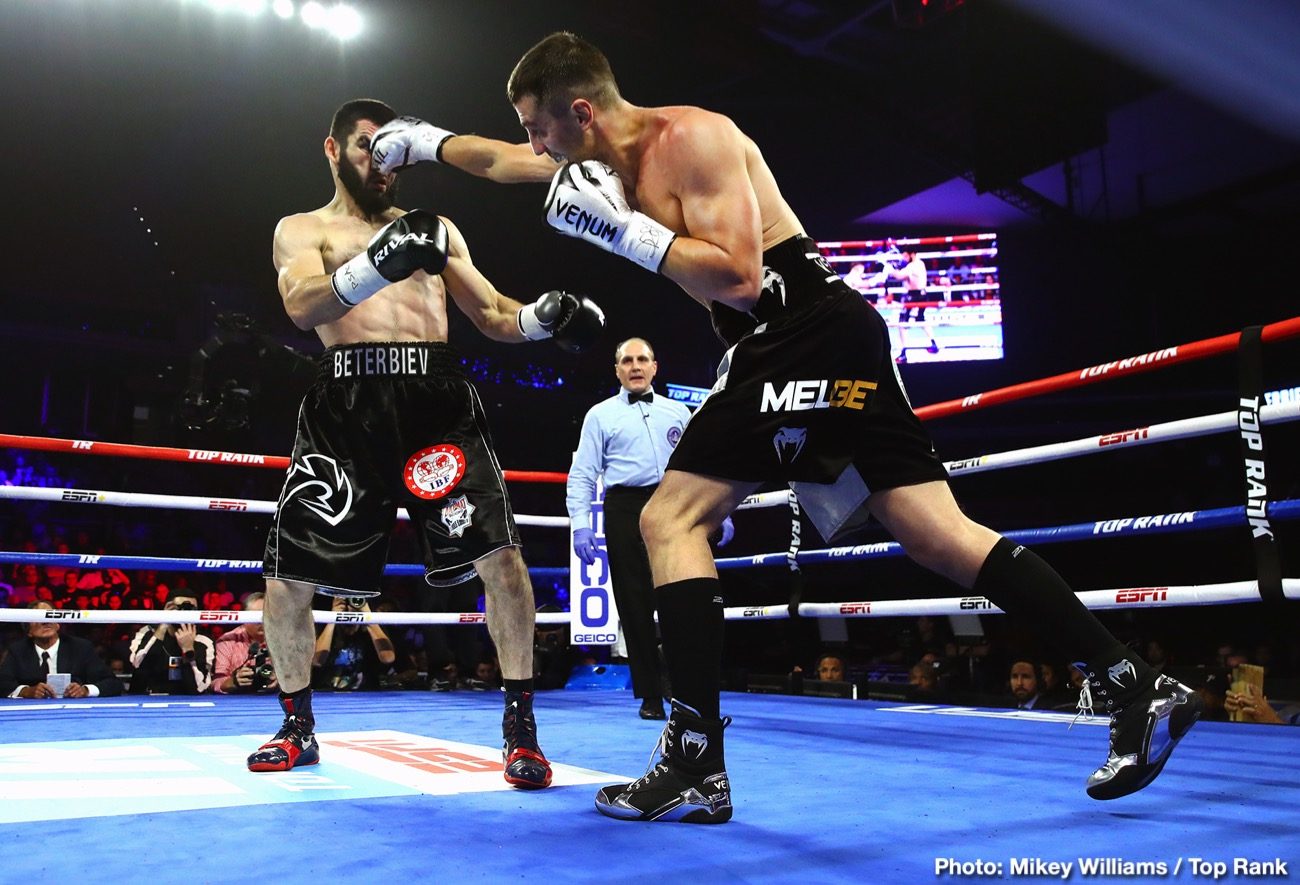 By Dean Berman: With his 10th round knockout of WBC light heavyweight champion Olekandr Gvozdyk (17-1, 14 KOs), IBF belt holder Artur Beterbiev (15-0, 15 KOs) dodged what could have been a highly controversial 12 round decision last Friday night at the Liacouras Center in Philadelphia. Two of the judges had Gvozdyk leading 87-84 and 86-85. The third judge had Beterbiev up 87-83. How the judges scored it was based on what their personal preference is.

The two judges that had Beterbiev behind on the scorecards going into round 10 somehow had things a little backwards with their scoring. Beterbiev landed not only the harder shots than Gvozdyk, but he also landed MORE punches and with a higher percentage. Beterbiev connected on 161 of 515 punches for a 31 percent connect rate. For his part, Gvozdyk, 28, landed 118 of 614 shots for a 19 percent connect percentage.

Just based on those numbers, Beterbiev should have been in the lead going into the 10th round. However, it’s possible the two judges that scored it for Gvozdyk were influenced by the crowd, which appeared to be pro-Gvozdyk. He was getting much of the cheering last night. When things started turning sour for Gvozdyk in the 9th, the fans were shouting as much.

Gvozdyk’s game unraveled completely once Beterbiev started touching him to the body in round nine. Gvozdyk lost his composure completely after getting hit with a painful looking right to the body. Forgetting where he was, Gvozdyk took a timeout after being hurt with a body shot. Gvozdyk didn’t even wait for the referee to give him permission to recover from the body shot. He motioned to the referee and then leaned over to shake off the pain from the body shot. There was no question that the punch was thrown above the waist of Gvozdyk. He was so hurt and desperate at that time that he called a timeout.

Gvozdyk fell apart in 9th round

Where things started to go really wrong for Gvozdyk was in the 9th round when he was hammered by body shots from Beterbiev. As the round ended, Gvozdyk was barely hanging in there, and looking like he needed to be pulled out of the fight to save him. The referee looked poised to stop the fight in the final seconds of the round when Beterbiev started to tee off on the badly hurt Gvozdyk. In the 8th, Gvozdyk had landed some big right hands to the head of Beterbiev, and appeared to take that round. Some boxing fans believed that Gvozdyk was starting to get back into the fight after looking poor in rounds 6 and 7.

Beterbiev toyed with Gvozdyk in those rounds, and it looked like a teacher schooling a student in the sport. But in the 8th, Gvozdyk came back strong, and caught Beterbiev with a number of hard right hands that got his attention. Going into the 9th, it looked like anybody’s fight. However, Beterbiev suddenly turned up the heat on Gvozdyk, and started throwing a lot more shots to the body than he had in the previous eight rounds.

Gvozdyk lost his composure once he got hurt

This sudden surge of offense targeting the body of Gvozdyk caught him unaware. He bad barely been able to handle the occasional hard body shots that Beterbiev was nailing him with in the preceding rounds of the contest. But when Beterbiev started throwing mostly body shots in the 9th, the fight became a rout at that point.

Gvozdyk made a hasty retreat. It was like watching armor fly off of Gvozdyk as he lost his composure completely during his retreat. It was during that round where Gvozdyk called a timeout after being hit to the body. When a fighter calls a time out when they’re hurt, it’s clear that they’ve lost their senses entirely. Unfortunately, Gvozdyk was no longer competitive in the fight, and was a complete mess. In a last ditch effort, Gvozdyk’s trainer Teddy Atlas gave him a pep talk after the 9th round. It was no use. Gvozdyk had nothing left, and he couldn’t handle Beterbiev’s powerful body shots.

Pep talks only work up to a certain point. What was causing Gvozdyk to fall apart was on the physical side. His body could not handle the punishment that Beterbiev was dishing out with his shots to the midsection. Beterbiev’s body shots were thrown with straight hand hands that were exploding on impact. These weren’t shots thrown from up close.

Oleksandr used up too much energy early on

Gvozdyk used up a lot of energy in his gas tank in building up a lead in the first six rounds of the contest. In contrast, Beterbiev looked very relaxed, and fought like he was biding his time to knock the 2012 Olympic bronze medalist out. And in hindsight, Gvozdyk used the wrong approach in expending so much energy in building up a lead that he couldn’t sustain in the fact of the unrelenting pressure that Beterbiev was putting him under.

In the pro ranks, judges are expected to score rounds based on which of the two fighters are landing the cleaner, harder blows. Unfortunately, not all judges score fights based on that criteria. Two judges that had Gvozdyk winning were focusing on nice combination punching early on while ignoring the much harder shots that Beterbiev was nailing him with.

From rounds 2 to 9, it was hard to give Gvozdyk more than two of those rounds. He fought well in the 1st round and the 8th. Beterbiev was landing the better shots all the other rounds. Even in rounds 1 and 8, Beterbiev’s shots looked better. You could see that they were affecting Gvozdyk, and it was impressive to watch.

The scoring by the judges that had Gvozdyk ahead makes little sense when looking at the fight. Beterbiev, 34, was landing the more telling shots in every round of the fight, and taking the starch out of Gvozdyk slowly. It’s interesting that two judges that saw the same fight that the boxing world saw, had Gvozdyk leading. The scoring by those two judges seemed to be upside down to what really took place last night. Could they not see that Beterbiev was wearing Gvozdyk out? It’s hard to know what goes through the minds of judges when they score a fight completely opposite of the way fans.

“I thought Gvozdyk was boxing well, but he couldn’t slow down the strong, determined, undeterred Beterbiev with punching power,” said ESPN commentator Tim Bradley via ESPN.com . [Gvozdyk] “didn’t have the gas tank. He’s a wrecking ball. And he’s a seek-and-destroy type of guy and he showed tonight he’s more cerebral than we give him credit for. He’s just not a come-forward guy.”

It was more than just Gvozdyk not having the gas tank needed to win. Gvozdyk’s inability to handle getting hit to the body was the real reason he lost the fight. He could have been at full strength in round 9 and 10, and he still wouldn’t have been able to take the body shots that Beterbiev was hitting him with.