Thurman’s tells Pacquiao, “Let’s give them that rematch” 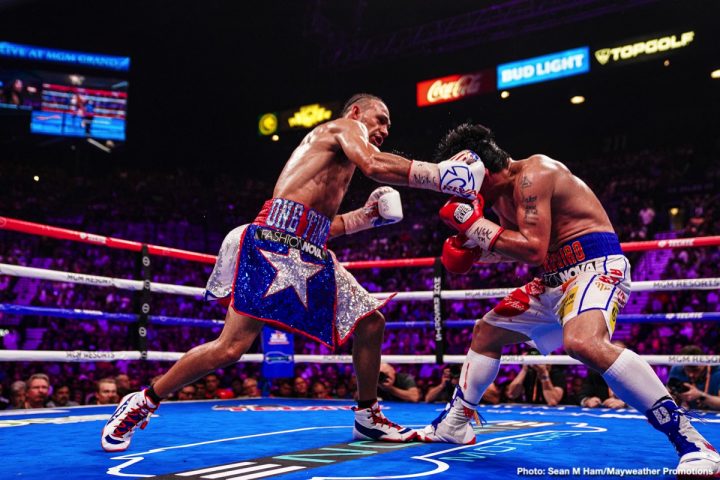 By Dan Ambrose: Keith Thurman emerged yesterday to speak for the first time since his loss to Manny Pacquiao last Saturday night, and he says, “Let’s give em that re-match & another FOTY.” ‘One Time’ Thurman (29-1, 21 KOs) would obviously like to get another big payday in a fight with Pacquiao. Keith hasn’t made the big money in his previous fights that he made last Saturday night against Pacquiao. Asking Pacquiao for a rematch make Thurman look money hungry, and trying to cash out before his career implodes.

It would look like a money grab on Pacquiao and Thurman’s part if they fought each other in an immediate rematch without the two of them fighting some other guys in between their rematch. A rematch would make sense if Thurman redeemed himself by beating someone like Danny Garcia, Terence Crawford, Errol Spence, Shawn Porter, Yordenis Ugas or Sergey Lipinets. Thurman might not be able to beat any of those guys at this point in his career. He looks pretty faded.

Thurman lost the fight to Pacquiao by a 12 round split decision last Saturday night on Fox Sports Pay-Per-View at the MGM Grand Garden in Las Vegas, Nevada. The scores were 114-112, 114-112 for Manny, and 114-113 for Thurman. There was nothing controversial about the results of that fight. Thurman, 30, simply got beaten by the better fighter on the night in 40-year-old Pacquiao.

In the first, Thurman was dropped, and he was later hurt in round 10 by a body shot. While Thurman did fight well in the middle rounds, he didn’t do what he had to in the last three rounds to secure the victory.

Thurman looking for another payday?

Thurman got a nice guaranteed purse of $2.5 million for the fight, and he’s expected to make a lot more than that. He could make a bundle from this fight once the final PPV numbers are in.

You get blessings & lessons in life & Saturday offered both. I’d like to THANK everyone involved in the FOX PPV—especially @MannyPacquiao for the opportunity. And a BIG shoutout to all the fans. I’ll be back on top soon. Manny: Let’s give em that re-match & another FOTY! #OneTime pic.twitter.com/nzJG26AICv

There’s no real reason for Pacquiao to give Thurman, 30, a rematch, because it was a conclusive reason. Had the fight been a controversial one, then it would make sense for Manny to give One Time Thurman another shot. Moreover, Pacquiao is 40-years-old, and he doesn’t have a lot of time left in his career to be throwing a bone to Thurman so that he can get another payday.

Pacquiao can gain a lot more by fighting the winner of the Errol Spence Jr. vs. Shawn Porter fight, or by waiting to see if Floyd Mayweather Jr. will come out of retirement to fight him. There’s also big money fight possibilities against WBO welterweight champion Terence Crawford and Amir Khan.

These are the options for Pacquio:

Thurman took a lot of punishment in his loss to Pacquiao last Saturday. Keith’s face was reddened, and he suffered a cut and bloody nose. It would be a good idea for Thurman to take a break following his defeat, and try and rebuild his career.

The major problem Thurman has is the lack of fan interest in a second Pacquiao-Thurman fight. The fans aren’t screaming from the rafters for Thuramn and Pacquiao to do it again. If Pacquiao and Thurman were to fight each other right away, it would likely do poor numbers on PPV. Thurman needs to show that he’s still a serious welterweight, and not just another fighter trying to hustle a payday to help pad his retirement years. It would be good for Thurman to take on one of the tough contenders like Yordenis Ugas to show that he belongs at the top.

This would be a good time for Thurman to make it know that he wants WBO welterweight champion Terence Crawford or the winner of the Errol Spence Jr. vs. Shawn Porter fight. If Thurman can beat those type of guys, then he would be back in the running to fight Pacquiao.

Amir Khan an option for Thurman

Amir Khan is expressing interest in facing Thurman if he can’t get a fight against his desired opponent Pacquiao. Khan, 33, is coming off of a knockout win against Billy Dib, and he plans on fighting next on November 8 in Saudi Arabia. Although Khan mentions other fighters in addition to Thurman that he would like to fight on November 8, those guys are mostly busy and/or coming off of fights around that time.

“The welterweight division in boxing has to be one of the toughest in the world,” said Khan to Sky Sports News. “I’m still in the top 10 rankings over there in the welterweight division, so I just feel that the likes of Keith Thurman, you’ve got Shawn Porter who’s fighting [Errol] Spence, the winner of that fight is available.”

If Thurman makes a major push for the Khan fight on November 8, he could get a nice payday. That’s a winnable match-up for Thurman, as long as Pacquiao hasn’t beaten something out of him from all the punishment he dished out last Saturday.

Khan (34-5, 21 KOs) looked the best he has in years in destroying former IBF featherweight champion Billy Dib in four rounds on July 12 in Jeddah, Saudi Arabia. For the his easy night’s work, Khan collected close to $9 million. That’s a lot of money for a fight that was for all intents and purposes a mismatch from the word go.

Believe it or not, there would be a lot to lose for Thurman in a fight against Khan. Losing to a 40-year-old Pacquiao isn’t as bad for Thurman than if he were to get beaten by Khan. Thurman’s reputation wasn’t mortally wounded with his loss to Manny. It’s unthinkable for Thurman to lose to Khan.