Jason & Andrew Moloney out to look impressive this weekend 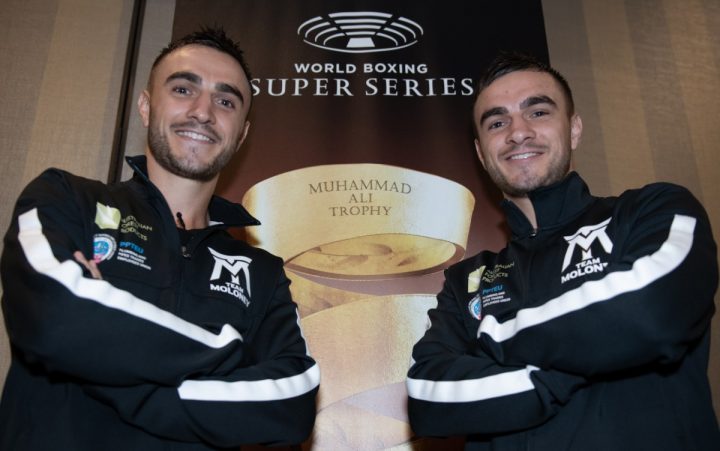 Andrew Moloney has everything to lose this weekend at the Seagulls Stadium, Tweets Head, as he faces former Tanzanian Champion Selemani Bangaiza who has been drafted in as a late replacement to challenge the undefeated Moloney.

’The Monster’ who is coming off a devastating knockout victory against Miguel Gonzalez which gave him a number 2 rating with the WBA, knows that only a punch perfect performance will be acceptable if he wishes to challenge for global honours, and the Super Flyweight sensation opened up about his new challenge on June 15 in Tweets Head.

Moloney said, ”Firstly thank you to my team, my trainer Angelo and my manager Tony Tolj for getting me ready for a great event this Saturday night and making sure I had a game opponent in the opposite corner.

”You can never underestimate a late replacement. Look what has just happened to Anthony Joshua, I am sat at number 2 in the world. I have a lot to lose and I need to be on form to make sure that does not happen.”

Moloney is on the cusp of a world title clash at super flyweight with Kal Yafai currently holding the WBA version of the world title. It was also announced in recent weeks that Andrew and brother Jason had linked up with global promotional powerhouses Top Rank.

Andrew discussed the link up with Top Rank and what effect that has had on his mindset heading into Saturday nights clash at the Seagulls Stadium.

Moloney stated, ”My mindset is always business first. I prepare like a professional and I intend on putting on an explosive display on Saturday night and show why I believe I’m the best 115 pounder in the world.

”It’s a dream to be signed to Top Rank, and it reiterates why I have to be on fire this weekend. This could be my last fight in Australia for a long time and if it is I want to make sure it’s a performance people remember.

The Australian continued, opening up on his plans post-Saturday night, ”I’m not looking past Saturday night but as people know I’m on the verge of becoming mandatory for Kal Yafai and that’s the fight I want, if not another world champion. I just want to be a world champion and I believe I will become one in 2019.”

Jason Moloney is all set to continue his march towards a crack at the world bantamweight title, as he faces the task of a late change in opposition this coming week at the Seagulls Stadium, Tweets Head.

Moloney opened up about training camp and his reaction to a late change of opponent.

The world-rated bantamweight stated, ”Training camp has gone perfectly for this fight with Angelo and the team. I always prepare correctly no matter the circumstances. It’s what being a professional is about. Plan for every circumstance!”

Moloney continued, discussing the late change in opponent, ”These things happen but thank you to my manager Tony Tolj for getting me a replacement who is going to come to test me.

”You can never overlook any fighter. Look what happened with Anthony Joshua last week. I can’t let slip-ups like that happen to me.”

The final if the World Boxing Super Series will be contested between Filipino legend Nonito Donaire and the monster Naoya Inoue. Moloney gave his assessment on the final and opened up about his plans post-June 15.

’The Smooth One’ said, ”Firstly I’m not overlooking my task on June 15. I have a tough opponent and I want to put on a show as this could be the last time I fight in Australia for the foreseeable future. I want this show to be an unforgettable night of boxing for all Australian fight fans.”

Moloney, who along with brother Andrew recently linked up with global promotional juggernauts Top Rank, continued, ”I think Inoue will win but it’s a great fight. I wish I could have had the opportunity to fight Inoue as I feel I beat Rodriguez but that is in the past.

”I want world titles this year so for me a fight with the WBA number 1 Solis for the world title is one that I would want. There is talk of Rigondeaux fighting at bantamweight too and if I had to fight him I would do happily.”