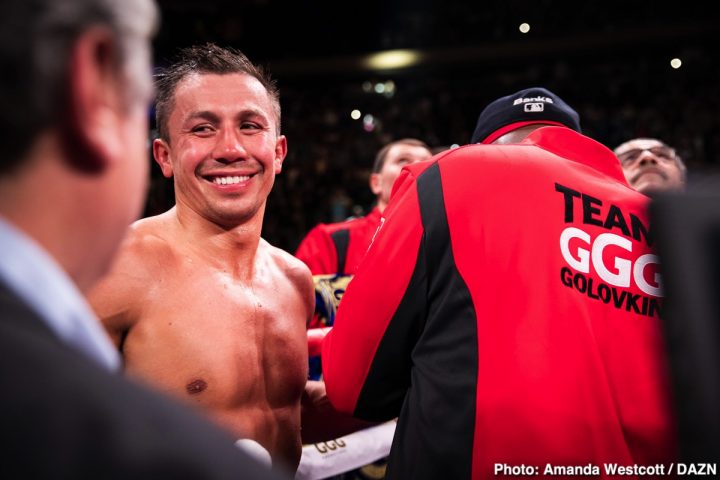 By Mark Eisner: It didn’t take long for Gennady Golovkin to react to Saul Canelo Alvarez’s promoter Oscar De La Hoya after he advised him on Twitter that he must win a world title for him to get the third fight against Saul Canelo Alvarez in September on DAZN.

Following his fourth round knockout victory over the game Steve Rolls (19-1, 10 KOs) last Saturday night, Golovkin told the media at the post-fight news conference that he’s “not interested” in what Oscar has to say, and that he “talks so much.”

Golovkin (39-1, 35 KOs) is extremely confident that the third fight with Canelo (52-1-2, 35 KOs) will take place in September. It’s the second biggest fight in boxing at the moment behind the rematch between Anthony Joshua and Andy Ruiz Jr.

DAZN wants the third fight between Canelo and GGG this year, so it’s likely going to happen in September unless Golden Boy Promotions can get a popular fighter like Errol Spence Jr. to agree to face Canelo in that month. Canelo vs. Spence is a big enough fight to replace the Canelo-GGG trilogy fight for the time being.

“I’m not really interested in what Oscar is doing or saying, I’m not really interested in that at all,” said Golovkin at the post-fight news conference. “I don’t really like following men, you know. I’m not about following men at all. What do you think I should write him back? You look good, you smart guy? Come on! He doesn’t know me. Just forget it. This is hype, this is hype today. Oscar [tweeting], just forget it. He talk so much, he back talk — I’m not thinking about what he said, Oscar,” said Golovkin.

There will be much complaining from boxing fans if they don’t see Canelo and GGG meeting for their trilogy match in September. The fans won’t tolerate seeing these two fighters matched against other fighters in September. They want to see Canelo and GGG fight a third time so they can prove once in for all who the better fighter is between them. De La Hoya has little choice in the matter. He must give the fans the fight they want to see. If De La Hoya can sign Errol Spence to fight Canelo for September, then that’s okay. The fans won’t mind that fight, but Spence has already said $20 million is just a first offer. He wants to hear other offers for a fight between him and Canelo.

Golovkin put himself in position for the trilogy fight by knocking out Rolls with a left cross in the fourth round last weekend at Madison Square Garden in New York. It was a highlight reel knockout that had Rolls flat on his face on the canvas.


« Tyson Fury: ‘Joshua should retire if he loses rematch with Ruiz Jr’