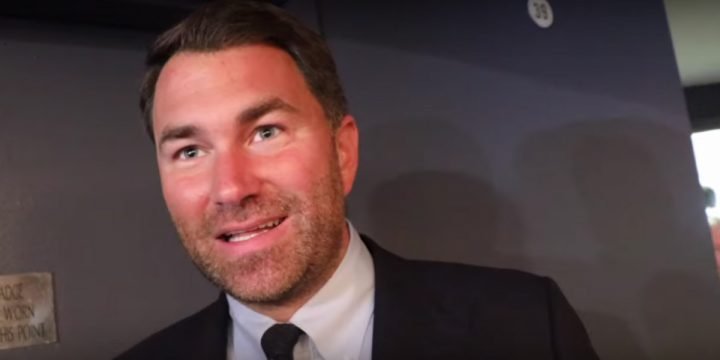 By Charles Brun: Tyson Fury has been offered 60-40 for a title shot against IBF/WBA/WBO heavyweight champion Anthony Joshua, and that appears to be the final offer. Joshua’s promoter Eddie Hearn says Fury wants a 50-50 deal, which is what he was going to get for his rematch with WBC heavyweight champion Deontay Wilder on May 18th, but he pulled out of negotiations and signed to fight Tom Schwarz on June 15.

Hearn points out that Fury is not a world champion, and that means he’s not in the position to get 50% of the revenue for a fight against Joshua. However, Fury still considers himself as a world champion by continually reminding the media that he’s the “lineal heavyweight champion” due to his victory over former IBF/IBO/WBA/WBO champion Wladimir Klitschko four years ago in 2015. Fury counts the victory over Wladimir as him being the lineal champion. Fury was stripped of all of his titles one by one for failing to defend them, but he sees the lineal title as a belt that he hasn’t lost. Unfortunately, there’s no actual title for the lineal strap. It’s one of those bragging right things that some fighters and their hardcore boxing fans like to bring up.

“Fury is as good as anybody else out there. Of course, he’ll go for the [Anthony Joshua] fight, but on what terms? That’s the 64 million question, isn’t it?” said Hearn to Behind The Gloves. “He’ll go for the fight, but he wants 50-50. He’s a voluntary challenger against a world champion. He has massive value. He’s a good fighter. He’s a draw, but nowhere near a draw as Anthony Joshua, but still a big draw. He’s already been told 60-40, they know that I think that’s a fair offer for Tyson Fury, who doesn’t hold one belt. It’s madness. They don’t want to fight Joshua unless they get a deal that’s too good to be true, and that’s sad,” Hearn said.

Joshua has a lot of options ahead of him in terms of his mandatory defenses against the likes of Kubrat Pulev and Oleksandr Usyk. Hearn says Dillian Whyte is also a possibility for Joshua. WBC heavyweight champion Deontay Wilder took his name out of the running for a fight with Joshua this week by announcing his rematch with Luis Ortiz, that’s expected to take place in September on Showtime pay-per-view.

If Fury sticks to his guns and insists on getting a 50-50 split with Joshua, Hearn will need to give him that split unless he gets beaten in the near future. Once Fury loses, he won’t be able to ask Joshua for a 50-50 split. There aren’t any guys on the horizon that has the talent to beat Fury other than Wilder, and those two won’t likely fight each other in a rematch until 2020. In the meantime, Hearn will need to give Fury the 50-50 split that he’s asking for if he wants to put together a mega-fight between him and Joshua. If Hearn is stubborn about it, then Joshua will be limited to fights against Usyk, Whyte and Pulev.

“Fury just turned down a fight with Wilder for the world title,” said Hearn. “He would have three belts, and become the #1 guy in the division by beating Joshua. If it’s that easy, as he always says it is, just do it. So we’ll see,” said Hearn in daring Fury to take the fight with Joshua with a 60-40 percentage split.

A victory for Fury over Joshua wouldn’t make him the #1 heavyweight in the division. To become the number one heavyweight in the division, Fury would need to beat both Joshua and Wilder. Fury can’t just beat Joshua and then call himself #1 if Wilder is still out there as a major threat to him. A lot of boxing fans think Wilder was robbed of a victory by the referee that worked the Wilder-Fury fight with the way that he seemed to give Fury a massive amount of chances to survive a 12th round knockdown. If Fury does beat Joshua, he’s got to defeat Wilder to become the top guy. It would be the same thing if Fury beat Wilder. He would still need to defeat Joshua to become the top guy, because right now there is no #1 heavyweight. Joshua, Wilder and Fury are considered the top guys by the boxing fans.

It’s a good offer that Hearn has made for Fury to fight Joshua, but it’s not enough. Fury has already made it clear that he wants a 50-50 deal. So unless Hearn wants and Joshua want to sweeten the offer, they’re going to need to stop mentioning wanting to put a fight together with Fury as well as Wilder. Fury isn’t the type of fighter that is going to change his mind about what his asking price is. If Hearn wants to end the games, he can always give Fury the 50-50 split, and make the fight with Joshua happen. In the long run, Joshua will probably make more money by giving Fury what he’s asking for, because the fight with happen now instead of five to seven years from now. Joshua will make a lot more money from his fights due to the popularity that he attains from beating Fury now. The same goes for a fight between Joshua and Wilder. If Joshua gives Wilder the 50-50 deal he wants for the fight, then that match can happen soon as well.