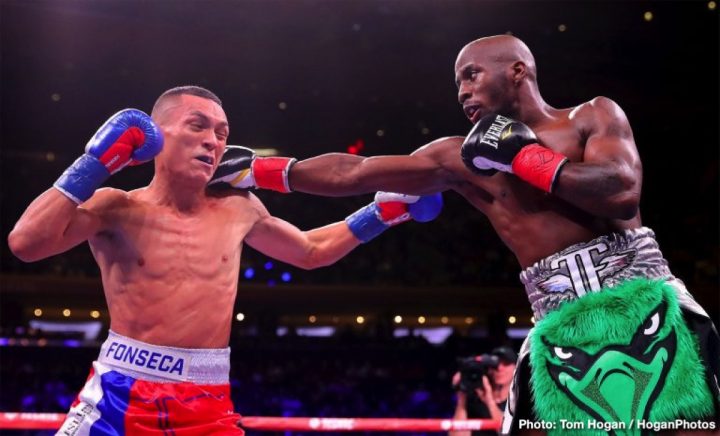 Farmer said after the fight that he’d like to fight Davis next. The way that Farmer looked, he doesn’t look to be fighting at the same level as Davis. Farmer is a good fighter, but he didn’t look great in struggling to defeat Fonseca, who is a fringe contender at #13 IBF. The fight should have been far easier than it was. Fonseca was landing a lot of punches in virtually every round. He lacked the punching power to hurt Farmer. Had those shots been thrown by Davis, they would have been more damaging.

Fonseca, 24, did a good job of staying close to Farmer to land shots on the inside. Farmer was able to answer back each time, but he was getting hit a lot. The fight did not look like the mismatch that the boxing fans and the media thought it would be when it was first made. After all, Fonseca was a guy that had been obliterated by Gervonta just last year. Davis set the bar in how Farmer had to look, but he couldn’t fight at the same level. Obviously styles make fights, but Davis looked so much better in beating Fonseca compared to Farmer tonight. The only thing you can think is Farmer isn’t on the same level as Davis Farmer wants the fight, but he end up regretting it.

Ali won almost all the rounds, but he wasn’t impressive. Ali was backing up constantly by a fighter smaller than himself, who was older and weaker than him. This wasn’t the type of fighter that Ali should have been backing up against. He had the power, speed and youth advantage over Herrera, but he wasn’t taking advantage of it. Ali should have taken the fight to Herrera and tried harder to get him out of there, but he was gun-shy the entire fight. Ali looked he might have been still having flash backs of his multiple knockdown 4th round knockout loss to Munguia last May. Herrera showed a lot of courage in taking the fight to Ali for the full 10 rounds. It didn’t matter to Herrera that he was fighting a guy with more speed and power than him. He was willing to attack him regardless.

Ali landed a flurry of shots in the 7th round that had Herrera backing up. However, Ali wasn’t able to fight hard in a consistent manner during the entire round. He let Herrera come after him as the round ended.

In rounds 8 and 9, Herrera stalked Ali around the ring, hitting him with body and head shots. Herrera was still getting the better of him, but the rounds weren’t one-sided. Herrera was making them competitive with his aggression. Ali was content with staying on the outside, and keeping away from Herrera as much as possible.

Ali’s trainer wasn’t happy with the way he was fighting. In between the 8th and 9th rounds, he slapped Ali in the face and yelled at him that he needs to stop backing up. It looked bad the way Ali was backing up against a journeyman level fighter. Ali came out aggressively in the 9th and 10th rounds, but he wasn’t able to maintain his attacks. He quickly reverted back to his defensive style, and went back to the ropes where he was attacked hard by Herrera.

The performance from Ali showed that he’s not mentally back from his loss to Jaime Munguia yet. Ali needs to get some more wins under his belt against lower level opposition before he’s matched against the world champions in the welterweight division. He’s not ready to fight the top 147 lb fighters yet. It was admirable that Ali was able to beat former WBo junior middleweight champion Miguel Cotto in 2017 to win the World Boxing Organization 154 lb title. But he’s not ready to fight any of the top welterweights with the way he fought tonight. 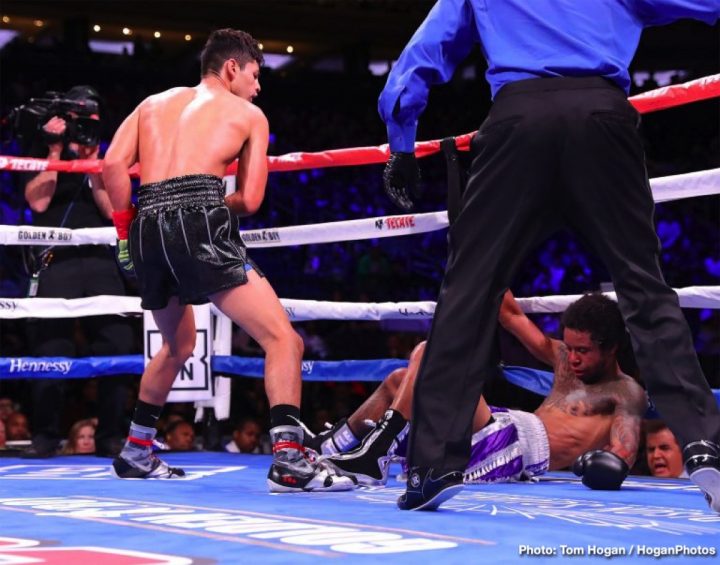 In other action on the card, super featherweight contender Ryan Garcia (17-0, 14 KOs) dominated journeyman Braulio Rodriguez (19-4, 17 KOs) in stopping him in the 5th round. The official time of the stoppage was at 1:14 of round 5. Garcia was fighting for the first time with Eddie Reynoso as his trainer, and he looked good. Reynoso is the trainer for WBA/WBC middleweight champion Saul Canelo Alvarez. Garcia, 20, knocked Rodriguez down in the 1st round with a left to the head. Rodriguez looked like he was trying to get disqualified, as he was hitting Garcia with low blows, and rabbit punches to the back of the head. The referee chose not to address the rabbit shots, but he did take a point away from Rodriguez for his low blows in the 3rd. In e 5th round, Garcia dropped Rodriguez hard with a left to the head. Referee Ron Lipton then stepped in and halted the fight. Garcia looked good throughout the fight. He showed that he’s really starting to mature at 20. It was a much better performance by Garcia from his fights against Jayson Velez and Carlos Morales. Garcia struggled in both of those fights, and looked like someone that wasn’t capable of mixing it up against any of the world champions at super featherweight. Garcia had been calling out WBA super featherweight champion Gervonta ‘Tank’ Davis. But the way that Garcia fought against Morales and Velez, he didn’t look ready for him. 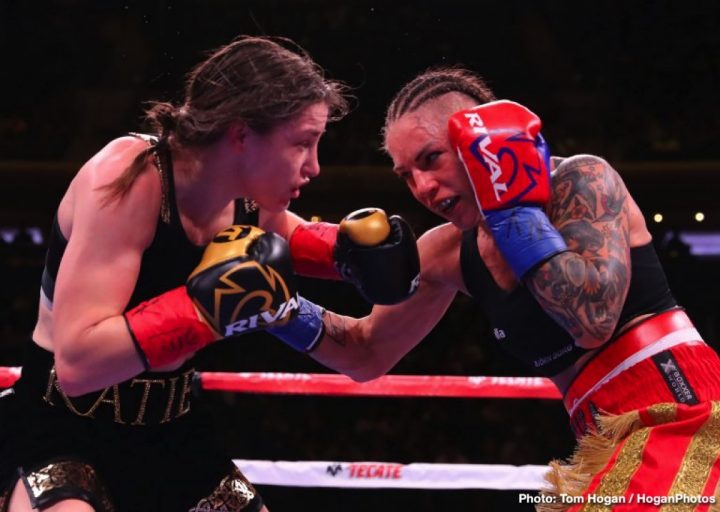 Women’s IBF/WBA lightweight champion Katie Taylor (12-0, 5 KOs) stayed unbeaten in defeating Eva Wahlstrom (22-1-1, 3 KOs) by a 10 round unanimous decision. The scores were 100-90, 100-90 and 100-90. Boxing News 24 gave it to Taylor by a 100-90 score, Wahlstrom didn’t win a round. She was totally dominated from start to finish in the fight. It was impressive. The only criticism that you can give Taylor is the fact the she wasn’t sitting down on her shots. Taylor was throwing speedy combinations, but they had nothing on them. Taylor can’t shake her amateur style. When she did set her feet, she was able to generate a lot of power, but she was more focused on throwing fast combinations, and there was no way that she could get any power on those punches. The difference in the fight was the hand speed from Taylor. She was just too fast for her opponent from Finland. You’ve got to give Wahstrom credit for her ability to take shots. That was admirable on her part to take everything that Taylor was dishing out.