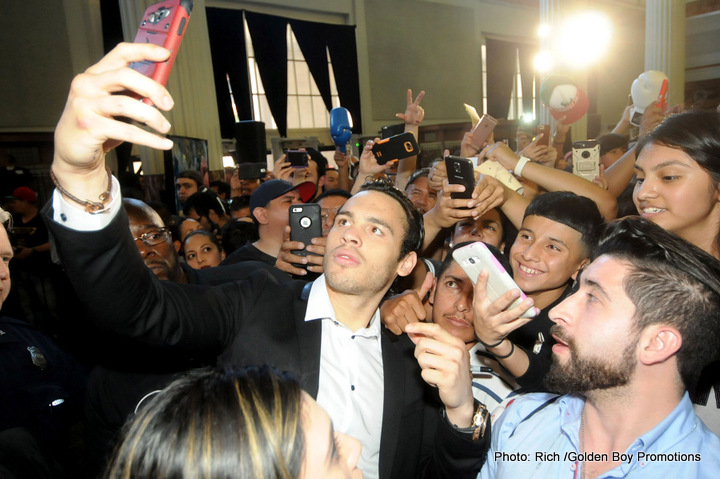 By Dan Ambrose: Former WBC middleweight champion Julio Cesar Chavez Jr’s December 1 fight against Alfredo Angulo (24-7, 20 KOs) will be canceled due a missed medical exam for Julio with the commission, according to CelisDeporte.

It’s unclear why the 32-year-old Chavez Jr. missed his medical exam. Whatever the case, it had to have been an important enough exam for Chavez Jr. to be taken off the card.

Chavez Jr’s fight against the 36-year-old Angulo was supposed to take place on the non-televised, non-pay-per-view portion of the Deontay Wilder vs. Tyson Fury card at the Staples Center in Los Angeles, California. Wilder-Fury will be televised on Showtime PPV. Chavez Jr. (50-3-1, 32 KO)s) hasn’t done enough with his career recently for him to wind up on the PPV portion of the Wilder-Fury broadcast on Showtime.

Some boxing fans were looking forward to the Chavez Jr. vs. Angulo fight. It pitted two fighters that are on the downside of their careers. Although Chavez Jr. isn’t old at 32, his career has been on the scrap heap since his one-sided 12 round unanimous decision loss to Sergio ‘Maravilla’ Martinez in September 2012. That was another fight that Chavez Jr. was involve in that had massive hype surrounding it, but it failed to live up to the expectations.

It’s been 18 months since Chavez Jr. last fought in losing a one-sided 12 round unanimous decision to Saul Canelo Alvarez last year on May 6 on HBO PPV at the T-Mobile Arena in Las Vegas, Nevada. There was a lot of interest from boxing fans in paying to see Chavez Jr. and Canelo face each other. It was billed to be a war between the two Mexican brawlers, but it turned out to be a one-sided fight with Canelo hitting a badly weight drained Chavez Jr. at will. The fight was so bad to watch. It made Chavez Jr., Canelo and Golden Boy Promotions look bad because the fight failed to live up to the huge billing. It was always going to be difficult for Chavez Jr. to come back from that embarrassing loss. He wasn’t going to be given a choice spot on the Wilder vs. Fury card after a horrible performance like that.

With Chavez Jr. apparently now off the Wilder-Fury card, it’ll be interesting to see if the promoters for the card an find a replacement opponent for Angulo to fight on December 1. Angulo has been training all this time for the bout. It would be a shame to waste all that training for nothing. If a replacement opponent could be found on shot notice, it would be nice to see Angulo inside the ring on December 1, even if his fight isn’t going to be shown on the PPV portion of the broadcast. The 13-year pro Angulo still has the same punching power for the most part as always. The only difference is Angulo is fighting at 168 instead of 154, which is the weight he started his career at after competing in the 2004 Olympic games. Angulo’s power went a lot further when he was fighting at junior middleweight than it does now at 168.