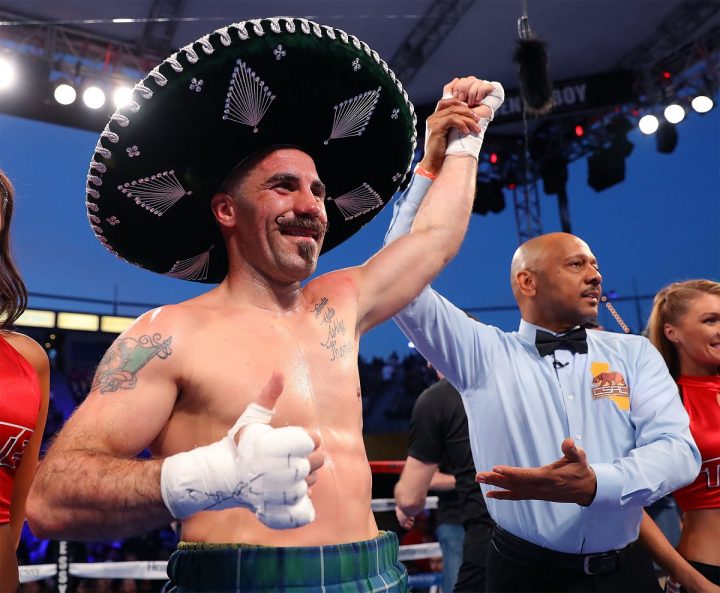 By Scott Gilfoid: Gary ‘Spike’ O’Sullivan doesn’t foresee his fight against former IBF middleweight champion David Lemieux being a difficult fight for him on September 15 on the undercard of Gennady Golovkin vs. Saul Canelo Alvarez on HBO PPV.

O’Sullivan, 34, says he looks forward to adding Lemieux’s name to his resume of notable wins. I don’t know that O’Sullivan belongs at this level against a quality knockout artist like Lemieux. O’Sullivan is not a good fighter. He can punch a little, but his skills are rudimentary and his stamina horrible beyond belief.

There’s obviously a reason why O’Sullivan’s management has put him in with only two good fighters (Billy Joe Saunders and Chris Eubank Jr.) during his career, and that’s because he loses when he’s stepped up. However, Golden Boy couldn’t put O’Sullivan in with a fodder opponent and stick him on the televised portion of the Canelo-Golovkin2 card. O’Sullivan had to be matched up with a name fighter that the casual boxing fans could recognize otherwise they wouldn’t be as eager to purchase the fight on HBO pay-per-view.

This is by far the biggest fight of the 34-year-old O’Sullivan’s career, which means he’s got to make it count by going out and knocking Lemieux out. Lemieux is gatekeeper level middleweight. He beats the guys that don’t belong in the top 15, and he loses to the solid fighters that operate at the highest levels of the middleweight division. As such, if O’Sullivan isn’t one of those highest level middleweights, Lemieux will find him out straightaway and have him kissing the floor within three to four rounds.

O’Sullivan is a good trash talker, but he doesn’t have the resume of wins that would suggest that he’ll do anything other than lose to Lemieux. O’Sullivan is older than Lemieux, and his resume is pitiful to behold. It’s easily one of the worst in the middleweight division as far as top five contenders go. If Lemieux knocks O’Sullivan out, then he’ll temporarily halt his dream of fighting Saul Canelo Alvarez and Gennady Golovkin. Golden Boy will likely feed O’Sullivan to Canelo anyway at some point, but a bad loss to Lemieux will delay that for a year or two.

We may not see much in the way of defensive skills on display for the O’Sullivan vs. Lemieux fight on

September 15, but this fight will likely steal the show and out-perform the main event between middleweight champion Gennady Golovkin and Saul Canelo Alvarez, as well as the co-feature bout between WBO junior middleweight champion Jaime Munguia (30-0, 25 KOs) and Brandon Cook. Someone is going to get knocked out in the Lemieux-O’Sullivan fight, and it could be a real brutal one.

#3 WBA, #3 WBO, #6 WBC and #14 IBF O’Sullivan (28-2, 20 KOs) needs a victory over Lemieux (39-4, 33 KOs) for him to get pushed up the rankings. To get a title shot against WBA/WBC champion Golovkin, O’Sullivan will need to become a mandatory, because he’s not someone that will bring in money on HBO PPV. Golovkin was going to use the 34-year-old O’Sullivan as a replacement opponent to fill in after Canelo pulled out of their May 5 fight after testing positive twice for clenbuterol. However, after it was revealed that HBO would be putting the Golovkin-O’Sullivan fight on regular non-PPV HBO, O’Sullivan pulled out of the fight.

It was a questionable move on O’Sullivan’s part to pull out of a title shot against Golovkin, because he may never get another chance to fight for a world title for the remainder of his career. Golden Boy Promotions will make sure O’Sullivan gets a significant fight against someone like Canelo, but Lemieux will put them in a tough position if he knocks him out on September 15. Golden boy will need to burn up one of Canelo’s valuable fights if they decide to match the beaten O’Sullivan against him.

Canelo vs. O’Sullivan won’t sell on HBO PPV if the Irish fighter is knocked out by Lemieux. Even if O’Sullivan beats Lemieux, a fight against Canelo won’t sell on HBO PPV. O’Sullivan would still need to bat a relevant fighter in the division like Demetrius Andrade, Jermall Charlo, Sergiy Derevyanchenko or Daniel Jacobs in order for fans to get excited at seeing Canelo and him face each other. Beating Lemieux won’t be enough for O’Sullivan to get fans eager to see him fight Canelo. That fight will look like yet another cherry pick for Canelo, who has had a lot of soft opponents during his career.

”I think Lemieux is going to be an easier fight for me than Douglas, no doubt about that,” O’Sullivan said.

Lemieux has more punching power than Antoine Douglas, and his punch resistance is better. This could be a very tough fight for O’Sullivan if he comes to slug it out with Lemieux. O’Sullivan’s stamina has been poor during his career. In his losses to Chris Eubank Jr. and Billy Joe Saunders, O’Sullivan gassed out early in both fights and wound up getting worked over in one-sided fights. O’Sullivan’s wins have been against guys that are not upper echelon fighters. These are the best guys O’Sullivan has beaten: Antoine Douglas, Nick Quigley and Matthew Hall. The rest of the fighters that O’Sullivan has beaten have been dreadfully poor. His management has clearly been creating an inflated ranking for him by putting him in against guys that would lose to virtually everyone in the top 15 and many journeyman level C-level fighters as well.

“I don’t fear his power,” O’Sullivan said to badlefthook.com. “I’ve been hit by heavier guys in the gym. Billy Joe Saunders actually recommended sparring partners that I’ve used for this fight. He doesn’t like Lemieux because Lemieux came up with crap excuses saying that he had an injury and that’s why BJS beat him.”

There’s no mistaking the fact that Lemieux didn’t look in the best of shape in his 12 round decision loss to WBO middleweight champion Billy Joe Saunders last December. Lemieux looked overweight after rehydrating. He made weight, but then he put on a tremendous amount of water weight after he rehydrated. Lemieux looked physically ill against Saunders. This was easily the worst performance of

Lemieux’s career because he didn’t look like he was ready to fight even one round. He clearly had started training camp at too high of a weight, and then used the camp to take the weight off. The Lemieux that beat Curtis Stevens by a 3rd round knockout and the one that fought Saunders was two different fighters. Lemieux was in excellent condition for the Stevens fight. I don’t know what happened to Lemieux in his preparation for the Saunders fight? Whatever the problem, it kept him from performing like he was capable of doing. We’ve seen Lemieux look much better in his career. You don’t want to take away credit from Saunders, because he did a good job in beating Lemieux. However, there’s no way that you can say that Lemieux was near 100 percent for that fight. He looked like he was 50% of what he was for the Stevens fight.

”Well, you refer to my defeat against Eubank, I got an injury,” O’Sullivan said in blaming his loss to Chris Eubank Jr. on an injury. ”I think — since I came up that I was going to fight him, I didn’t know a great deal about him. I watched him with Billy Joe Saunders, Toribio. He got up there, got knocked down easily.”

It sounds like O’Sullivan is a hypocrite in criticizing Lemieux for saying he was injured for the Saunders fight, and yet turning around and blaming his own loss to Eubank Jr. on an injury. It looked to me like O’Sullivan was exhausted after round 2, and he had nothing left to fend off the many shots that Eubank Jr. was hitting him with. O’Sullivan wanted to throw punches, but he was so tired and getting hit so much by Eubank Jr. that the fight turned out to be a slaughter after the 2nd round. It’s disappointing to hear O’Sullivan blame that loss on an injury, because he was awful against Eubank Jr. Those two could fight each other 100 times, and I would venture to guess that Eubank Jr. would win 99 of 100. O’Sullivan is just not in the same league as Eubank Jr., and I’m not even sure he could ever beat him. O’Sullivan is just too limited to beat a fighter like Eubank Jr. It doesn’t matter if O’Sullivan studied Eubank Jr’s losses to George Groves and Saunders in fine detail. O’Sullivan is not beating Eubank Jr., and I don’t think he beats Lemieux either unless he’s injured or if his weight is off for the fight.


« Oscar Valdez says Canelo has the tools to beat GGG