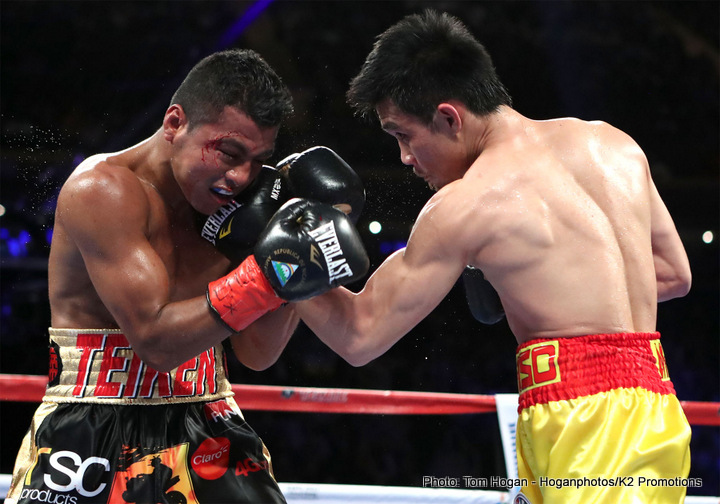 By Dan Ambrose: Roman “Chocolatito” Gonzalez will be looking to end his two-fight losing streak against former WBO minimumweight champion Moises Fuentes on the Saul Canelo Alvarez vs. Gennady Golovkin 2 rematch on September 15 on HBO pay-per-view at the T-Mobile Arena in Las Vegas, Nevada. The Gonzalez-Fuentes fight still hasn’t been finalized, but it’s in the works according to ESPN.

Gonzalez vs. Fuentes will be the co-feature. That’s a questionable move by K2 Promotions sticking two struggling fighters like Chocolatito and Fuentes in the co-feature bout. Hopefully, K2 promoter Tom Loeffler can put some upcoming talents on the undercard to help increase interest from boxing fans in paying to see it on HBO PPV.

A lot of boxing fans are turned off at having to pay to see the Canelo-GGG 2 rematch after the controversial 12 round draw of their previous fight in September 2017 in Las Vegas, Nevada. Having a good undercard for the rematch would help appease some of the fans who don’t like the idea of having to pay to see a second fight.

Fuentes lost to Donnie Neites by a 9th round knockout in May 2014. Earlier in his career, Fuentes defeated Raul Garcia by a 12 round split decision to win the World Boxing Organization World minimumweight title in August 2011. Fuentes defended the title three times before vacating it in 2013.

Gonzalez and the 30-year-old Fuentes (25-5-1, 14 KOs) are in the same boat career-wise with both of them looking like shot fighters. Fuentes has lost three out of his last four fights since 2016. His losses came against Diago Higa (1st round KO), Ulises Lara (18-15-2) and Kosei Tanka. Fuentes is losing against even weaker opposition at this point in his career, which isn’t a good sign. You can’t blame Chocolatito’s management for picking an easy mark like Fuentes because he’s coming off two defeats against Srisaket Sor Rungvisai and he badly needs a vitory at this point. It’s no longer about Chocolatito taking on good opposition and more about him needing solid win over a body. Another loss for Gonzalez at this point would be a signal that he needs to end his career and find another line of work.

A little over a year ago, Gonzalez was No1 in the pound-for-pound polls, and he was seen as an HBO darling. Gonzalez was beating everyone that was put in front of him. The mistake Gonzalez made with his career was moving up to the 115-pound division, which he neither has the size or the punching power to dominate in. Since making the move up to super flyweight, Gonzalez has taken a pound in three consecutive fights against Carlos Cuadras and Srisaket Sor Rungvisai.