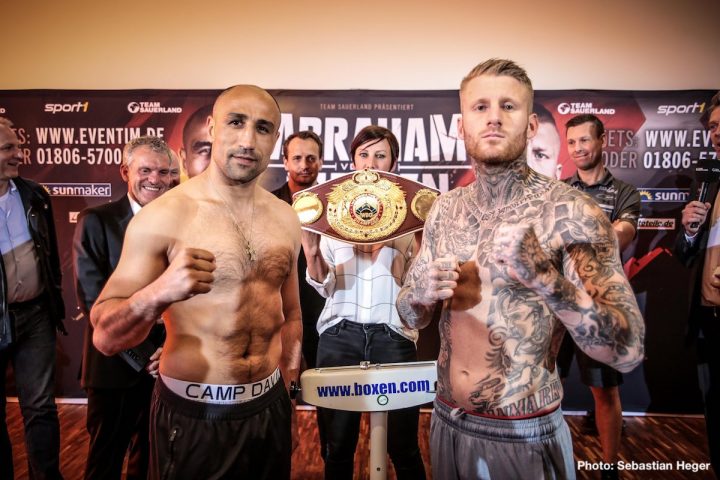 Arthur Abraham (46-6, 30 KOs) and Patrick Nielsen (29-2, 14 KOs) both made weight today ahead of their crunch super middleweight clash for the WBO International title tomorrow night at the Baden Arena in Offenburg, Germany.

The former two-weight World Champion and his Danish stable-mate are both looking to revive their World title ambitions. The winner will be positioned for a World title eliminator, while the loser will be forced to reassess their career. 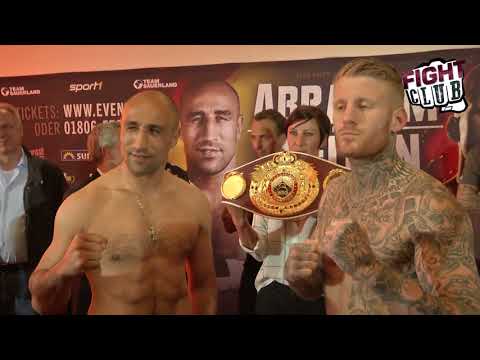 Abraham returns to the ring having dropped a points decision to Chris Eubank Jr. in an IBO World title contest on July 15 at The SSE Arena, Wembley, while Nielsen is back in action after a knockout loss to John Ryder at the same London venue on October 14.

Following these defeats, both men are now eager to re-establish their World title credentials in this crunch Super Middleweight clash.

Having consulted his long-term coach and mentor, Abraham, the former IBF Middleweight and WBO Super Middleweight World Champion, says he is ready to get back on the World title trail in an attempt to reclaim his 168 lbs crown.

“After my last fight, I spoke to my coach Ulli Wegner and he helped me reach a decision,” said ‘King Arthur’. “I am not ready to retire! There is still more I want to achieve in boxing, and most of all I want to become World Champion again.

“I’m looking forward to fighting Patrick Nielsen, and putting on a good performance for my fans. I know Patrick is a good boxer. This will be a good test for me and a chance to prove I’m ready to challenge for World titles again.”

Nielsen, the former WBC Silver Middleweight and WBA International Super Middleweight Champion, says he is looking forward to facing Abraham in Offenburg, and having learnt a lesson from the Ryder loss, believes he has what it takes to defeat the German boxing icon and get his career back on track.

“I can’t wait for this fight,” said the 26 year-old from Albertslund. “My last fight really put things into perspective. I have made some changes in my training and my personal life, and now, I’m 100% focused on boxing. People will see the real Patrick Nielsen on April 28.

“Abraham is still a big name in boxing and a very tough guy. If I can beat him, it shows I can beat a lot of the top guys, and hopefully that will lead to bigger fights. I believe I can beat him. I’ve got age and speed on my side, and I’m ready to do whatever it takes to win.”

Having started his professional career in Germany, Nielsen says he has no concerns leaving Denmark to meet Abraham in his home country. “Germany is like a second home to me,” he said. “I used to fight there when I started so I can’t wait to get back there again.”

Promoter Nisse Sauerland has highlighted the importance of this fight for both men. “This is a fight neither man can afford to lose,” said Sauerland. “Both men want to get back into World title contention – but only one can come out on top! The winner can be challenging for World titles, while the loser will have a long road back. There is a lot on the line and that guarantees excitement. Fans can look forward to a great night of action in Offenburg.”

Tickets for Arthur Abraham vs. Patrick Nielsen on April 28 in Offenburg will go on sale tomorrow and are available online via www.evetim.de or calling 01806-570044.