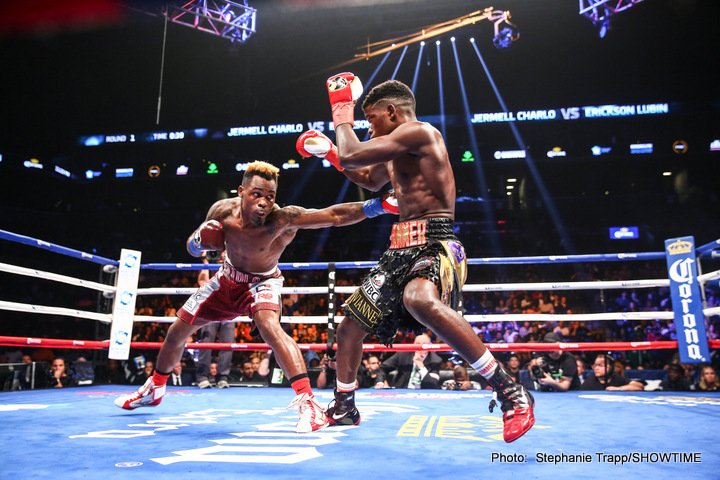 Charlo (30-0, 15 KOs) surprised many boxing fans by knocking the 22-year-old Lubin out with a single right hand to the head at the end of round 1. There was no coming back from the knockdown for Lubin, as he was too out of it for him to get back to his feet. The fight had to be stopped by the referee Harvey Dock.

Charlo is turning himself into a star with the way he’s knocking guys out lately. It’s very impressive. Look out Saul Canelo Alvarez and Gennady Golovkin, we have a new star on the way with Jermell Charlo.

“That was a surprise,” said WBC heavyweight champion Deontay “Bronze Bomber” Wilder to Thaboxingvoice.com about Charlo’s knockout of Lubin. “I had Lubin, I’m going to be honest with you right now. When I see Charlo, he ain’t like the other brother [Jermall Charlo]. He’s so confident. He reminds me of me at a smaller weight. That’s why I like his brother, his confidence. I think Lubin, it’s going to humble him down a little bit. He was doing a lot of talking. When he got knocked out, it’s going to humble him down a little bit. I don’t think it’s over for him. I think he’s going to come back, because he’s a good fighter,” said Wilder.

What was interesting is the Charlo vs. Lubin fight outperformed the main event fight between WBA Super World junior middleweight champion Erislandy Lara in his fight against Terrell Gausha. The Lara-Gausha fight brought in an average of 399,000 viewers with a peak of 476,000. The fight brought in the fewest amount of viewers of the 3 televised junior middleweight title fights. Lara, 34, defeated Gausha by a 12 round unanimous decision to hold onto his WBA title.

The opening fight on the televised portion of Showtime’s card between IBF 154 lb. champion Jarrett Hurd and Austin Trout averaged 430,000 viewers with a peak off 555,000. The fight had a higher peak but a lower average than the Charlo v. Lubin fight. Hurd took a boatload of punishment in the first 7 rounds before wearing down and stopping the 32-year-old Trout at the end of the 10th round.

What all this means is Showtime Boxing might want to evaluate the placement for Lara’s future fights on their network. If Lara is fighting on the same card as Charlo for instance, it might be wise for the network to put him in the main event and Lara in the co-feature or possibly the opening fight of the televised portion of the card until he starts showing that he can bring in better ratings.

When you see the first and second fights of a card outperforming the main event, like we saw last Saturday, then it’s time for Showtime to position the fighters that are bringing in higher ratings to the top of the card. Lara needs to improve his opponent selection, because he’s been facing too many fighters that have been safe fights for him. Lara has had too many mismatches lately with him fighting guys like Yuri Foreman, Jan Zaveck, Delvin Rodriguez, Ishe Smith and Terrell Gausha.

Wilder fires back at Hearn’s saying he rejected Whyte fight »